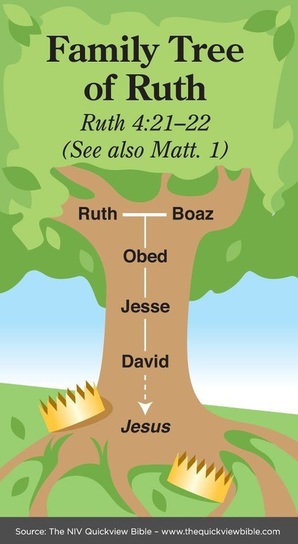 To the layman the story of Ruth in the Old Testament seems out of place and possibly unnecessary among the holy books of the Bible. The key to understanding this woman’s story is genealogy. Jesus was a direct descendant of Ruth so it was important that her story was included in the Old Testament.

But when you really study the genealogy, and determine just who all of the people were who were “begetting” children in the bloodline between Abraham and Jesus, there seems to be a serious problem. There is not a pure blood line linking Jesus to the Hebrew people.

Let us try to explain.

Jesus was a direct descendant of King David . . . if David ever existed. Archaeologists are having problems finding proof of this. But let’s assume there was a King David, who was the father of King Solomon and on and on.

So was the blood line via Boaz the genetic link to Abraham? Unfortunately, this was also compromised. It seems that Boaz was the son of Rahab, the harlot in Jericho who assisted in the Jewish invasion and destruction of all the people of that city. She was the only survivor. She was not an Israelite but because she helped in the invasion, she was allowed to live. She married the Israelite priest Salmon. They were the parents of Boaz.

Thus neither Boaz nor Ruth was included in the “sacred” Israelite bloodline that allegedly linked Jesus to the Jewish people.

Just to make sure the blood line was pure enough, the New Testament Gospel of Luke links Jesus blood line to David via Joseph. But the problem with this is that Mary, the mother of Jesus, was supposed to have been a virgin when she conceived. It was magical sperm from God. That means Joseph’s genetic link had nothing to do with anything.

But then the Jews of Jesus’ day ended up rejecting Jesus anyway. If they refused to accept him as the prophet that Paul insisted he was, then the purity of his genetic line wasn’t important to them. Or so they thought.

Later, after Paul proclaimed Jesus to have been a deity and a lot of Jewish people got involved in establishing Paul’s new cult, suddenly the blood line of Jesus became a much more important issue. Thus the writers of the Gospels and the many scribes who poured over the ancient manuscripts in later years, went to great lengths to assure that Jesus was truly a Jew with a blood line linked directly to Abraham, if not to Adam.

If we accept the Genesis story as the "gospel truth," the link to Adam is hard to disprove. But all of those whores who got involved in conceiving children between Noah and the reign of David kinda muddied up the pie.

For the Christians of the world, the purity of the Hebrew blood line may not be that significant. But at the time Paul was organizing his church, most of the followers were Jews. And for them, the genealogy of Jesus was very important.

After all, they believe they are “God’s chosen people.” So the joke is on them.
It seems appropriate that if Jesus was really a deity that lived among us for a while and had an important message for the entire world, his blood line should have included a little of everybody, not just that one race.