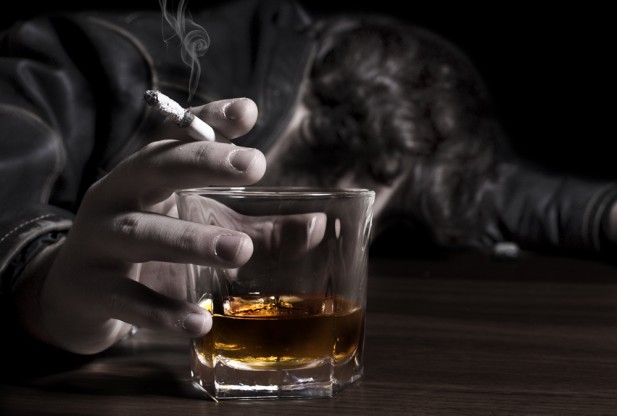 When living in Bad Axe, we had a crisis in the apartment building we occupied when one of the tenants got entangled with the police and his probation officer over his alcoholism.

It was well known that this man was "on the wagon" following a drunk driving conviction. He was riding a bicycle to work and depending on friends and neighbors to cart groceries and other essentials because his driver's license was in the hands of the state. And he was making regular visits to his probation officer.

His trouble began again when he showed up for his probation visit with alcohol in his blood. He was issued a notice to appear in Circuit Court to answer some questions by a judge.

The man, who usually lived a quiet and subdued life style, suddenly changed. For the next week, preceding that court appearance, he went on a wild drinking spree. A wild party raged in that apartment. Strange men and women drifted in and out, all of them staggering drunk. Some came to our door, asking for rides to the local liquor store because they were "too drunk to drive." Loud music blared.

Drunk people tend to confide in strangers. During this time we learned that our 39-year-old neighbor was in bigger trouble than we first thought. His battle with alcoholism had been going on for quite a while. He didn't have just one, but four drunk driving convictions on his record. In Michigan, the third DUI is rated as a felony punishable by a possible prison sentence. That our neighbor was enduring a lengthy probation sentence with his driver's license probably lost for life, was a relatively lenient sentence under the circumstances. He said he knew he was going to jail for at least a year, or worse. He talked about fleeing.

My late wife had a tendency to reach out to stray people in trouble. As the court appearance approached, she invited him to our place for a meal and a chance to sober up. We talked him out of running away. I suggested that he dress up, get sober, and apologize. I know the judge. I thought he would probably get a tongue-lashing and an extended probation if all went well. After all, as our neighbor I knew he had done well at holding a job and staying sober for more than a year. His problem was that, like so many in our area, the place where he worked was doing poorly and the man was recently laid off. His problem for him was idle time.

His rowdy friends did not leave the man alone, however. He went back to the bottle. The party continued on throughout the weekend. His court appearance loomed the following Monday morning.

When I headed off to the newspaper office that morning at about 7 a.m., music could still be heard from behind his door. Drunken voices were heard. The party had gone non-stop all that night and into the day. Naturally, our friend failed to show up for his court appearance. Even though my wife went to his door and tried to help, he said he was "in no condition" to go and went to bed instead.

The police were at his door within the hour. Consequently our neighbor's worst nightmare came true. He went to jail. An angry judge was about to throw the book at him.

That same day as I sat in on the court arraignments as a court reporter, I heard a lawyer plead for an 18-year-old boy who was charged with burglarizing several stores. The lawyer said this boy already had a long history of criminal behavior. He said "everything he has done is alcohol related. He has an alcohol problem at his young age. He can't seem to quit." The boy broke into the stores to steal alcohol because he didn't have enough money to buy it. The judge ordered extensive alcoholism treatment.

Alcoholism and addition to cigarettes were a curse on the youth in my day, and they still are. I can report here and now that I had my own bout with both of these addictive drugs. They almost killed me.

I stopped smoking the first time by accident. It was a serious accident. I wrecked my car while driving drunk and ended up in the hospital with a skull fracture. I was out of my head for about a week. When I was coming back to my senses during the second week someone brought a carton of cigarettes to my hospital room as a gift. In those days you could smoke just about anyplace.

I remember looking at that carton of Chesterfield cigarettes with surprise. "That's right," I said. "I smoke." I attribute the fact that I immediately lit up to my brain injury. I was not in my right mind at the time. That I had gone two weeks without a cigarette was a great start to quitting the addiction, but I threw that opportunity out the window.

It later took two more hard tries before I finally quit smoking. I quit the weed again that winter during my convalescent period. Then, after taking a brief job in the spring with an oil well crew in Southern Michigan and hanging around the roughnecks in that environment, it was not long before I was smoking again. I remember leaning over a bar, slurping a beer with the men I worked with, and lighting up. Alcohol and cigarettes just seem to go together.

I quit for good shortly after I married. I was on my first newspaper job then. One morning I was making my police rounds and was having a coffee with one of the deputies at the Sheriff's Department. We both lit cigarettes and started talking about how we were holding "coffin nails" in our fingers and that we should quit. That led to a decision by both of us to throw our cigarettes in the waste basket and make a ten dollar bet. The first one of us to start smoking again agreed to pay the other man the money.

Ten dollars in those days was a lot more money than it is today. It was, at least to us, a serious bet. It stuck with both of us. I saw this deputy, later retired, while on a book lecture circuit in Caseville. I challenged him about the $10 bet and he assured me that he still is tobacco free. So am I.

Was it hard to quit? Certainly. It took a mental conviction that it was something I wanted and needed to do. I was smoking three packs of cigarettes a day and buying my cigarettes by the carton. That is how severe my habit was. But I gave it up, cold turkey, as they say.

I did the same thing with alcohol within the next year. I decided that I did not want anything controlling my mind and destroying my body.

Both decisions came from personal conviction. Nobody else could do it for me, although I was blessed to have a loving wife who gave me lots of support. But I know about the cravings. I know about the friends who tempt you with cigarettes and drinks, especially during social gatherings. It sometimes is very hard to say no.

I especially remember coming out of smoke-filled meeting rooms, after hours of breathing second hand smoke, and having that craving for a cigarette all over again. I remember subconsciously reaching to my breast pocket for that cigarette as I sat working at my typewriter.

But after the first year something strange happened. Cigarette smoke started smelling repulsive to me. In fact, I sought smoke-free places to dine. And I discovered that beer tasted terrible.

When I reached that place, I knew that I had won.

Now if I could just quit eating too much and lose a few pounds . . .