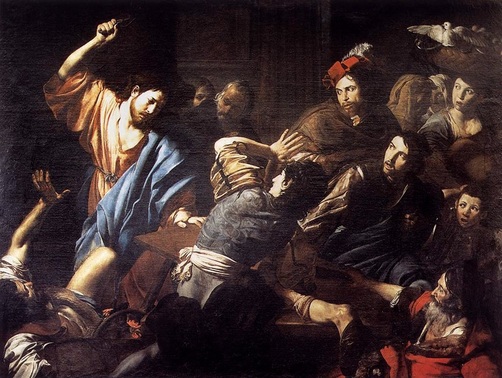 When Jesus Got Mad

We have this sense through church teachings and by reading New Testament passages that Jesus was a meek and mild man who walked around the land preaching love and kindness. Yet there are moments when the scriptures give us a peak at Jesus when he lost his temper and went into fits of righteous rage.

Matthew 21:12 tells us about the day Jesus drove the money changers out of the temple. Actually, they were doing more than making change for patrons. They were selling doves and animals to be used for blood sacrifice on the altar. It might have been even worse.

“And Jesus entered the temple and drove out all those who were buying and selling in the temple, and overturned and tables of the money changers and the seats of those who were selling doves. And he said to them, ‘It is written, My House shall be called a house of prayer, but you are making it a robbers’ den.”

A lot of us can remember when our mothers participated in church bake sales and other events to raise money to finance church activities, buy song books or send children on church sponsored trips. I used to wonder if Jesus had been around if he would have chased them out of the church too.

Actually, it seems that what angered Jesus on the day he went into a rage in the temple, upsetting the tables and chairs and cleaning out the “money changers,” was some kind of activity that was in no way a service to the people who came there to worship. Notice that Jesus admonished them for “making it a robbers’ den.” Either they were cheating the people who bought the doves, or they were selling illegal contraband.

Jesus must have been in a bad mood that day for earlier, as he and his disciples were making their way into the city they came upon a fig tree. Jesus said he was hungry and would enjoy some fruit from the tree. But it wasn’t the season for ripe figs and they found the tree barren. Jesus condemned the tree. He said “May no one ever eat fruit from you again.”

The next morning, after Jesus went into a rage at the temple, he and his disciples were leaving the city and passed the fig tree. Peter looked at the tree and exclaimed: “Rabbi, look! The fig tree you cursed has withered!”

In Matthew 23 Jesus blasted the scribes and Pharisees of the Jewish faith, calling them hypocrites because of their pride and failure to lead the people into righteousness. He told them “Woe to you . . . for you tithe mint and dill and cumin, and have neglected the weightier matters of the law, justice and mercy and faith; these you ought to have done without neglecting the others. You blind guides, straining out a gnat and swallowing a camel . . .Woe to you, scribes and Pharisees, hypocrites! For you are like whitewashed tombs, which outwardly appear beautiful, but within they are full of dead men’s bones and all uncleanness.”

Jesus continued on in his list of “woe unto you’s” then said: “You snakes! You brood of vipers! How will you escape being condemned to hell? Therefore I am sending you prophets and sages and teachers. Some of them you will kill and crucify; others you will flog in your synagogues and pursue from town to town. And so upon you will come all the righteous blood that has been shed on earth.”

It is clear that when Jesus was angry, he did not mince words. And if He ever returns, as many Christians believe, some of the first people he will be going after are the priests in their long robes and jeweled cathedrals, the righteous fundamental believers who failed to reach out with kindness to the poor, homeless and hungry, and the political leaders who lead nations to war in His name.