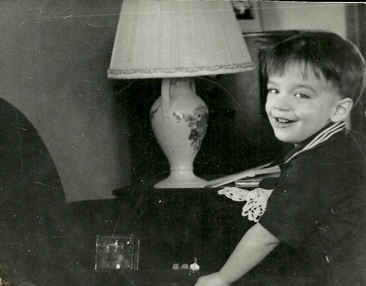 My Early Introduction To Music

Our parents introduced us to music at an early age. We had a large Philco entertainment console in our living room that contained a radio and 78-rpm record player. They bought recordings of symphonic classics by such composers as Beethoven and Schubert, the music of Victor Herbert, the Gilbert and Sullivan Operettas, and I recall one well-worn and very faint recording of the great Marion Anderson singing the Ave Maria on one side, and a sad spiritual . . . “Sometimes I Feel Like A Motherless Child” . . . on the other. I can still sing the words to that spiritual and I can still hear the beautiful sound of her voice as she sang it. I literally wore out needles and the tracks of some of my most favored recordings.

When I was old enough, a small upright piano was added to the furnishings in our home, and I began attending piano lessons. My teacher was Edith Oliver, a middle-aged spinster who lived with her elderly mother and her cats in a small house two doors away from the Methodist Church. She played the church organ, and made a meager living teaching piano lessons. My parents paid for weekly lessons with her for several years but I never mastered that instrument. I think my sister Andrea did somewhat better with her lessons. I don’t remember if Steve ever received lessons.

Oh, I played the piano. But it was from memory. I performed at Miss Oliver’s yearly recitals, playing short works by Chopin, Rachmaninoff and even some pop tunes of the day. But I never mastered the art of playing while reading the notes from a sheet of music. I still remember Miss Oliver’s little tricks for identifying the notes . . . “Every Good Boy Does Find.” And I understood the symbols for sharps and flats, and the long and short notes. Later when I sang from sheet music in various choirs, I realized that I could read music to voice. But I never could master converting the sheet music to the piano.

Strangely, I always loved the sound of the piano. I always thought that if I could have been taught basics in keyboarding, I would have been capable of playing music “by ear,” without reading the music. In later years, when we lived in South Haven, I purchased a used upright piano, bought some sheet music, and began teaching myself to play the instrument. It was not long before I was playing well enough that one summer night, when our front door was open, a neighbor came over to listen. When we moved from that house the next place had no room for the piano. It was left behind and I never played again.

When I was in the elementary school, I met Gertrude Scott, the school’s music and art teacher. Miss Scott, another middle-aged spinster, was the music teacher for the entire school system. She followed what must have been a busy schedule, moving by the day and by the hour from class to class, teaching both art and music. The lessons in the lower grades always varied. Art was not her venue. She loved music and made sure her students learned to love it as much as she did.

Not only did Miss Scott teach us to sing, but she introduced us to great music by playing recordings. I especially remember the recordings she played for us in the Second Grade. She first told us about the composers, then the music we were about to hear. I don’t know how it affected the others in that class, but this woman managed to wet my appetite for great music. By the time she let us hear the recording, I was enraptured by such music as Edvard Grieg’s Peer Gynt Suite, Rachmaninoff’s Hungarian Rhapsody No. 2, and Strauss’s Blue Danube. I think she even introduced us to the marches of John Phillip Sousa.

Miss Scott discovered early that I had a singing voice and she encouraged me to use it. She gave me special vocal training and brought me to various social functions in town to sing. I recall singing solo on at least two or three occasions. By the time I was in high school, I was not only singing in the school choir, but I was performing in a special boy’s quartet. I also joined the Methodist Church choir and got involved in a men’s quartet there. Those were the years that I discovered that I could read music after all. I found a lot of joy in singing then, and if I had learned how to play a guitar, I might have taken a completely different path in life. But my real love was always to the printed word. I think there was something in me that refused to allow me to go too deeply into music so that it would not be a career.

Somewhere along the line, during my younger years, I joined a community band under the direction of Charlie Kleinart. I never knew his background but he knew music and understood marching bands. He gave me a coronet and some instruction on how to play it. I even had a seat in the trumpet section. But I never mastered that instrument. I was still trying to play it by the time I was in high school. I joined the high school band and struggled with the horn for a while until a new band director, Val Stanley came to town. Val immediately moved me over to concussions where I began to enjoy being in the band. I played the snare drums, but when we marched, since I was the biggest boy in the band, I was assigned to carry the big bass drum.

In my senior year, a small band was organized to play at some of the school dances. I was the drummer. My drumming was pretty basic, with the left foot hitting the bass pedal and right foot bringing down the cymbals for the old “boom-chick” sound. I also slapped the brushes against the top cymbal, and whacked the snare drum. I wasn’t the greatest drummer, but I could keep a beat which is what was needed to keep the band on its course.

During the years that I was growing up, I began collecting records. I discovered that Rapson Electric, a store in Harbor Beach that sold household appliances, including radios and record players, and also had a small rack of recordings that could be bought. I remember either encouraging my parents to buy . . . or using allowance money to buy an Andrews Sisters pop tune, “Don’t Sit Under The Apple Tree.” When we made rare trips to either Bad Axe or Port Huron, where real music stores could be found, I cashed in.

I remember when the 45- rpm records came out on thin vinyl and suddenly the old Philco was too obsolete to handle them. After we moved to the farm, my parents bought a new, portable record player that handled records in three speeds . . . 78, 45 and 33-rpm. At about the same time, I received a small portable record player for my personal use. I was suddenly in heaven. My record collection began with the old classics and soon expanded to contemporary bands. Then I saw the Glenn Miller Story at the Harbor Beach theater and I was hooked on the big band sound. I remember Dad treated that music like it was unsuitable for his household. But Mom secretly told me she always liked Glenn Miller and enjoyed listening to the recordings when I played them. I just made sure we didn’t play them when Dad was in the house.

If my father even imagined what was coming next in the music world I am sure he would have thought us all insane. In high school, after I began driving, we discovered country western music. After the sun went down the radios could pick up an AM signal from Cincinnati where we heard all country music by singers like Ernest Tubbs, Hank Williams and Merle Haggard. Then one night while sipping Coke in Mom's Dairy Bar someone played Elvis Presley's hit song "Heartbreak Hotel" on the juke box. Everybody went nuts. We suddenly moved from country music to the new sounds of rock and roll.

Those were great days. My friends and I would ride around the streets of Harbor Beach, the car radio blaring the latest hit rock or country songs of the day, and jeering at the girls passing us in other cars.

During the day, while working around the house on the farm, my mother and I liked to tune into CKLW in Toronto and catch the top “pop” songs of the day. Music was clearly an important part of my life as a teenager.
​
After I got in college I discovered jazz. But that is another story.