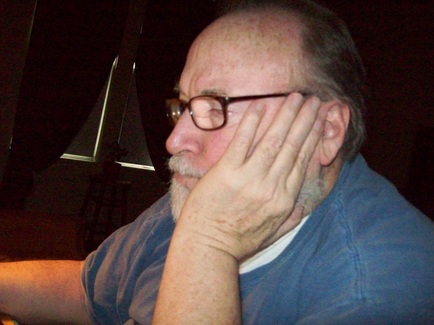 When waiting in an eye surgeon’s office for a check-up after having cataracts removed from my eyes, I encountered an elderly and outspoken woman who was struggling to get along with the help of a walker. "Getting old is hard work," she muttered as someone held a door for her.

As a member of the growing number of aging Americans now hobbling through life, I realized that this woman’s simple statement was quite profound. In spite of all of the fancy television ads and the promise of the "golden years," growing old is not quite as grand as some would have people believe.

In spite of all the things we do to attempt to stave off the inevitable, all of the components in our bodies seem to start shutting down as old age creeps up on us. I started losing my teeth when I was in my fifties and living without dental insurance. Rather than pay the cost of expensive root canals and crowns, I started telling dentists to just pull the tooth to stop the toothache. False teeth are not like real teeth but they are better than gumming it.
My eyesight, after years of a career spent in reading and writing, shifted from single lens readers to bi-focal and then tri-focal glasses. Amazingly, after cataract surgery, I have had new permanent lenses placed in my eyes that replaced my need to wear glasses at all. At least it doesn’t feel like I am wearing glasses. In reality, they are installed on my eyeballs. How cool is that?

The hearing also goes. A lot of older folks walk around with hearing aids jammed in their ears that amplify the sounds around them. My late wife and I just turned the television up louder, and talked more loudly to one another. It becomes a human comedy when we misunderstand what was said. We  learned to laugh at ourselves a lot.

Arthritis hits most of us during those "golden years." For some people, it comes early in life. It means painful joints and causes the elderly to lose that youthful spring in their step. Instead of zipping along, they tend to hobble painfully along, many with the help of canes or walkers. That makes the tasks of climbing stairs, mowing grass, shoveling snow and just keeping the house clean, all tasks still carried on by retired folks, slow and painful events.
​
Some of the elderly have Pacemakers installed to keep those tired heart muscles pumping regularly. Heart surgeons also are installing stints that fix failing veins and arteries as an alternative to open heart surgery. As the blood vessels harden and fill with plaque, the hearts pump harder to keep the blood circulating. That is when the blood pressure goes up. Without keeping it under control we risk heart attacks or stroke. So we take pills that control the blood pressure.

As aging livers, kidneys and other organs begin to stop functioning as they once did, doctors order us on salt-free and sugar-free and low fat diets. They prescribe more pills. Eventually we gulp down so many pills to keep us going that we don’t need breakfast to stave off morning hunger. When we do eat, the taste of the food we are allowed to have is bland. Not only are we going without salt in the food, but our taste buds are aging and it takes stronger flavors to satisfy our cravings. How cruel is that?

We get bald. When in my youth I sported a fine head of dark brown hair. So did my beautiful wife. Now the hair has turned white and gray, and a lot of it has been clogging up the shower drain because it is falling out.

The skin has gotten loose and flabby. This is what makes us appear old. We notice a lot of movie stars and television personalities pay a lot of money to have facelifts, tummy tucks and other artificial repairs to make themselves look youthful. Hair replacement science also is available. We don't have the kind of money it takes to buy that artificial "beauty," so my wife and I chose instead to "grow old gracefully," knowing that we were both in the same boat.

In addition to the aches and pains, we get tired quickly after much exertion, we fart a lot and sometimes pee our pants unexpectedly. They made adult diapers that take care of incontinence in the elderly, which is more common than you might think. It is kind of like going into a second childhood when you think about it.

We don’t think or respond as quickly as the younger people, so we tend to take more time with everything we do, including driving our cars.

I remember in my youth getting upset when my car got behind an older driver who seemed content at loping down the road at five miles under the speed limit. As news reporters we were usually always in a rush when driving anywhere. I recall a working companion once had a theory that the drivers to watch out for were white haired people who wore hats. They were always the worst, he said. Over the years I learned that he was quite right. Now that I have joined the ranks of the older drivers, I admit that my speed was always in check, mostly because I know younger drivers can be reckless and I don’t have the reflexes to react to things they might do on the road. But I made a point of never wearing a hat when I drove. Ha.

I remember when I was in college I rebelled against all of the time people spent getting up in the morning and getting ready to go to their classes. To speed things up I grew a beard to eliminate shaving, and got a flattop haircut, so I didn’t have to bother even combing my hair. All I had to do was get dressed, brush my teeth and slap some water on my face. A swipe of Old Spice and I was off to class.

Today I am still in revolution against the wasted time dealing with body issues, but my morning tasks are greatly lengthened. I still have my beard so shaving still is not a problem. I have lost most of my hair so a simple sweep of a comb does the job there. But cleaning teeth, washing up, putting on deodorant, swallowing a handful of pills and drinking a lot of water to keep the kidneys flushed, and then spending my mornings running to the bathroom to finish that flushing process, takes a lot of extra time and effort. It is hard to get much else accomplished.

Then there is that death thing. My wife recently passed after suddenly being stricken with a cancer that raced through her body. It is terrible to endure the death of a beloved spouse. My younger brother also died of cancer. Then old friends and former classmates are also dying off. I read obituaries now of people much younger than I am who are passing. In spite of the "hard work" of aging I now regard each new day as a gift as I await my turn.

When we add all of the other mundane tasks we deal with just to maintain ourselves, I wonder how we ever managed to work successful vocations into our lives. Between the weekly grocery shopping trips, the task of balancing the budget and paying the bills, preparing and eating meals, answering telephone calls, reading the mail and keeping up on the daily news, there seems to be little time for anything else.

My daughter, who lives nearby and keeps a daily watch over me, likes to get me out for walks along the beach, occasional restaurant meals, or sometimes just for scenic drives. I know she is doing it out of love but sometimes I would prefer to be left alone.

Then there are the constant doctor visits. I have to show up at least four times a year just to keep the prescriptions for all those pills active. And my doctor often sends me off to specialists just to check on things that might be going wrong . . . like bladder function, missed heart beats, skin rash, etc. There seem to be specialists in everything now. And every visit involves insurance paperwork and budgeting for co-payments.
​
And throughout all of this, every move we make is a painful act. Yes, that elderly woman in the doctor’s office was so right when she said "Getting old is hard work."