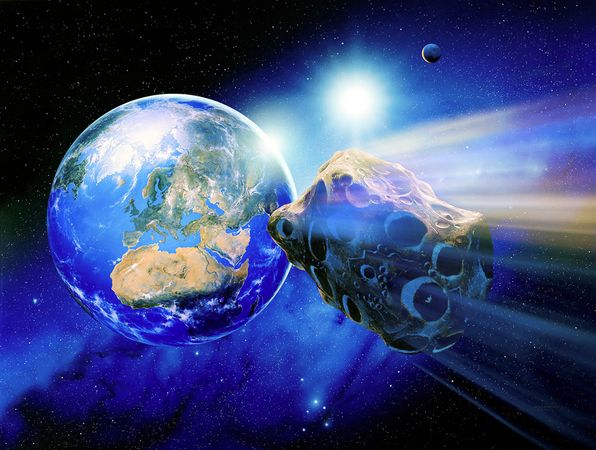 When Jack Sprat, our Godlike Productions doomsayer listed meteors among his list of concerns we believe he was really thinking about asteroids. There is a big difference.
Meteors have been lighting up the night sky for as long as there has been recorded human history. Every August sky watchers like to gaze up at the seasonal Leonid meteor shower, a celestial event when the sky is sometimes flooded with flashes of light flying across the sky.

Meteors occur when the always moving Earth passes through a region filled with interplanetary debris. Most of them are caused by particles calculated to be smaller than a grain of sand. They fly through Earth’s atmosphere at high speeds on parallel trajectories, burning up in a flash as they pass. They are not thought of as a threat.

Asteroids are larger pieces of space debris that also travel through space, often on strange broad orbits that bring them through our solar system at unexpected times. Some are no larger than a football, while others might be as large as a truck. We have always known about their existence, and found places on Earth where they have struck, leaving great scars on the landscape. But since they were thought to happen with intervals of thousands of years, we haven’t worried about them . . . that is until recently.

It probably was Comet Shoemaker-Levy, that we watched smash into Jupiter in 1994, resulting in a "zone of chaos" estimated to be as large as the Earth, that helped generate a realization that those flying rocks might have slammed into us instead. What would have happened?

Indeed, a cosmic collision of that magnitude has long been blamed for past mass extinctions on Earth, including the sudden extinction of the dinosaurs some 65 million years ago.

The advancement in telescopes that now can peer deeper into space than ever before, and high resolution cameras that peer down on the Earth’s surface from circling satellites has given us new insight into just how many of these big rocks are flying around in our solar system. This new technology also lets us know when asteroids are on a course that may result in a collision, and help us see where these things have struck our planet in the past.

Australian engineer Michael Paine used all of this known data and a computer simulation to calculate that during the last 10,000 years the Earth was hit about 350 times by asteroids large enough to cause extensive damage. Using the same data and projecting the computer simulation into the future, Paine calculates that during the next 10,000 years, cosmic collisions or near crashes could kill 13 million people, cause famines, wars and general chaos.

So now we have telescopes trained on the sky in all directions, many of them owned and operated by private groups, examining all of the known flying space junk and looking for new objects and studying their trajectories. The best known among them has been Space Watch at the University of Arizona. The object has been to find potential threats to Earth perhaps months or years before they strike. The hope has been that we have the technology to either blow up such an approaching asteroid, or at least hit it hard enough to change its course. It’s all science fiction.

We know that a lot of space junk has been leaving large pock marks on the other planets and moons in our solar system. The belief has been that Earth has escaped the heavy bombardments because of our atmosphere, which tends to cause most of the junk to burn up before it can strike. But the big pieces occasionally get through. When they do, the impact can be massive.

There is a well-known impact crater in Arizona that measures 1.2 kilometers in width. It was believed to have been created by a chuck of iron from space that struck the planet about 50,000 years ago.

The grand-daddy asteroid that caused a mass extinction some 65 million years ago was believed to have hit in the Gulf of Mexico, just off Mexico’s Yucatan Peninsula. There is a massive crater under the sea in that area.

There are numerous other craters known around the planet that have been a troublesome reminder that these big rocks may be striking us more frequently than we want to believe. We have heard of a large crater found in the Canadian wilderness, and we know of a smaller one on private forested property in the Thumb Area of Michigan.

The mystery blast over Tunguska, Siberia, that flattened trees over a 2000 square kilometer area and killed thousands of animals in 1908 was believed to have been an asteroid that exploded before it hit the ground.

According to Chinese records, about 10,000 people in the City of Chiling-yang perished in 1490 when an asteroid exploded over the city.

We have had some near-misses. In 1937 Asteroid Hermes, with a diameter of about a kilometer, whizzed past Earth by only 600,000 miles. Had it struck us, much of life on the planet would have been wiped out and the devastation would have been massive.

NASA’s Near-Earth Asteroid Tracking System has its eye on about 1,000 flying space rocks larger than one kilometer in diameter that are in the "near-earth" category. That means they have the potential of possibly getting too close to Earth and being pulled into a collision course by our planet’s gravity.

One other thought. Since water covers about 70 percent of our planet, the chances of a asteroid hitting an ocean is much greater than that of it striking the land. We can only imagine the size of the tsunami such a strike would create, and the impact a wave of water like that would have when it strikes land.

Astronomers tell us there is one particular troublesome asteroid called 2012 DA14 that passed very close to Earth on Feb. 15, 2013. It missed us by about 17,000 miles. They say this 150-foot wide rock is expected back in 2020 and that time, it may get close enough to strike us. It could have the impact of a thermonuclear bomb if it hits.
​
So yes Mr. Sprat, asteroids are something for us to be concerned about.