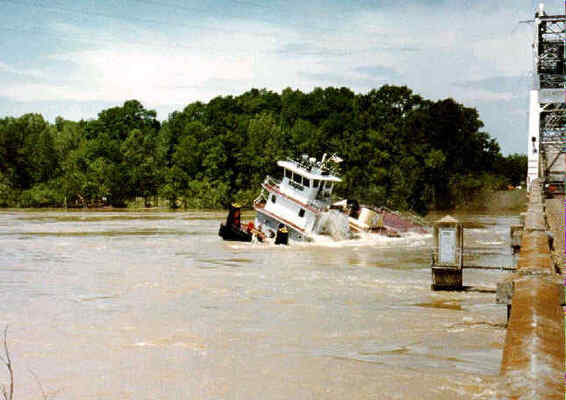 The photographs of the event, a mute testimony to a virtual miracle for river tow barges, have been circulating on the World Wide Web although the incident happened 50 years ago.

It was April 28, 1979, and the M/V Cahaba, commanded by Capt. Jimmy Wilkerson, was bringing two coal laden barges down the flooded Tombigbee River in Mississippi when the lift operator at Rooster Bridge failed to respond to a signal to raise the bridge.

Wilkerson had dropped the barges to float free under a non-opening area of the East bridge span where the current wasn't as strong then signaled for the bridge span to open so he could pass through "light" in the strong current. Pilot Earl Barnhart and two deck hands jumped aboard the barges to ride through under the bridge and await the tug on the other side.

As Wilkerson approached the lift section of the bridge, and realized that the span was not going up, he threw his engines into full reverse but the boat didn't have the power to fight the fast flowing river current. 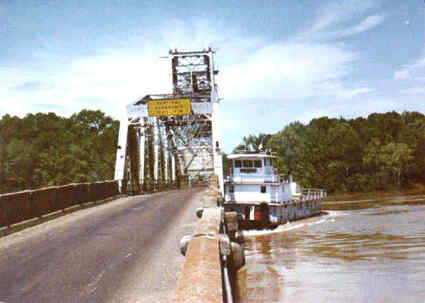 Hits the Bridge
The tug crashed into the side of the bridge, swung sideways, and the powerful force of the river pulled the port side of the tug down so the vessel went on its side and sank under the bridge, with Wilkerson and his engineer still aboard and at their posts. Wilkerson was at the wheel on the bridge.

What happened next is one for the record books. As people watched in horror from on top of the bridge, and a photographer from a local newspaper snapped pictures, it looked for a while as if the tug was lost in a tragic accident. But then, the vessel suddenly began to emerge on the other side of the bridge. The Cahabra had passed completely under the bridge.

As the vessel drifted away from the bridge, she slowly resurfaced, water pouring from the doors on the bridge and second deck, after Wilkerson threw them open. Eventually the vessel was back afloat, upright, with her twin diesel engines still running. 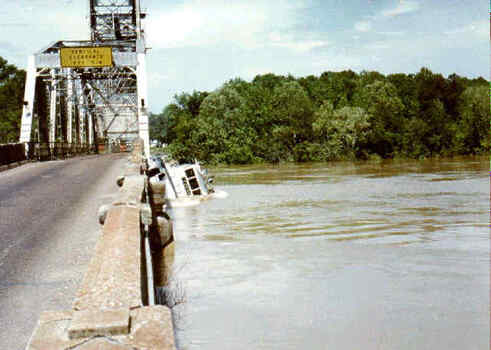 Sinking
Throughout the ordeal, Captain Wilkerson said he remained at the wheel. As the boat went over, he said he straddled the port pilothouse door frame. When the pilothouse was completely immersed, the port front window blew in filling the pilothouse with water. There must have been some air space because the captain was still on the job and very much alive when his boat came back the the surface a few minutes later.

After the incident it was revealed that the boat was equipped with cement ballast just over the keel so it was designed to right itself in the event of an accident like the one that happened. Also the crew was trained to keep the doors closed in the event of a spill, which kept the vessel buoyed.
They said the crew also had just topped off the fuel tanks at Demopolis, about 14 miles upstream. She had one central fuel tank forward of her engines. Had this tank been half filled, Wilkerson said it probably would not have returned to the surface.

Believe it or not, after the tug was refloated, Wilkerson moved it back up to the barges, took them back in tow, and the boat and crew continued on their way to Mobile Bay to deliver that load of coal. 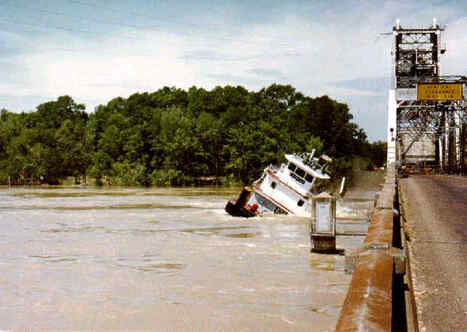