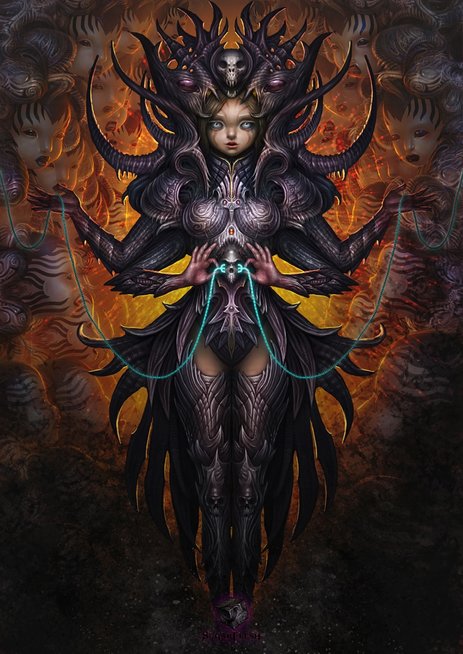 Lilith Rises to Reign Over the New Order

The story of Lilith is an ancient myth, believed to be of Hebrew origin.

As the story is told, Lilith was Adam’s original mate, created by God in the same clay from which Adam was made. But there was a problem. She declared herself equal to man, refused to submit to Adam’s will, and fled the Garden. Because of this, Lilith was cursed by God and is only vaguely remembered in the myth as a wicked woman, perhaps possessed by dark spirits. God then made Eve from Adam's rib, which, according to the Hebrew legend, was symbolic of the woman’s submissive role to men forever.

The story, while not of Biblical origin, expresses the same kind of sexist principle that intertwines throughout the Bible record. The Bible story, at best, is a twisted history of the human experience. Lilith's story is completely omitted from the Book of Genesis, and in the entire Bible, there is only one fleeting reference to her in the Book of Isaiah.

Isaiah 34:14 reads: "Wildcats shall meet with hyenas, goat-demons shall call to each other; there too Lilith shall repose, and find a place to rest." It is a strange, brooding reflection on the tragedy of a woman left cursed and broken, but for some reason, never completely forgotten.

An early writing that tells a story of Lilith was produced in medieval times. In a sick, satirical work known as the Alphabet of Ben Sirah, Lilith is portrayed as a magician who chose to leave Adam's side because she would not be his submissive slave. The entire book seems to mock the Old Testament stories, yet strangely enough, many contemporary Jewish writings refer to the work as proof of the story of Lilith and use it in an attempt to support Rabbinic legend. And this legend, just like the Christian story, teaches that man is superior to women.

There is another more simplified version of the Lilith story. This involves the interference by the “gods” or aliens who came among the earth primates, planted their DNA, and through genetic manipulation created the first humans.

Suppose that Lilith was, indeed, the first woman and consequently the first mate for Adam. But the genetic work was not perfected in her and she was left a hairy person; half human and half animal. When Eve appeared fair and hairless, Adam was attracted to her. Thus we had the first human love triangle.

Then there is a story suggested by some that Lilith and the Adam Kadmon were perfect in the garden. Like Adam, Lilith was created to possess both the “x” and “y” chromosome. Presently, only men possess both.

According to this scenario, their world was perfect. Both Adam and Lilith had great mental skills. They communicated mind-to-mind. They could move objects with mere thought. They could easily leave their bodies and go back into the spiritual world from which they came. Their genetic code was so pure they were resistant to disease. And the world they created was, indeed, a perfect Garden of Eden. The temperature was constant. There were no storms. Vegetation grew in abundance and food was plentiful for both man and beast.

Then came the invasion of the gods, who did not come to make the world better, but instead to cause mischief. We know that there is a balance to the universe, and that balance extends to the spirit world. Thus if there was a visitation by friendly entities, there may also have been a visitation by unfriendly ones as well. Suppose it was from this second visitation that Eve emerged. While designed to tempt Adam, she also was designed to implant an imperfect seed.

Eve may then have been placed in the garden to turn Adam's eye and create one of the oldest problems in love relationships; the "other woman."

If Eve was an imperfect human, created with only the "x" chromosome, she was deliberately given an imperfect genetic code. The gamble was that if Eve could compete with Lilith for Adam, and win, their offspring would be an imperfect race of humans. The people would have intelligence and the ability to think and communicate above the animals, but they would struggle in their efforts to rise to the god-like status that the perfect match between Adam and Lilith would have quickly produced.

This imperfection appeared quickly in the two sons, Cain and Able. If you remember your Bible stories, Cain murdered his brother in a jealous rage.

This may have been how the human race fell. Adam's children carried that imperfect genetic code, passed down from Eve. Consequently we humans have been plagued with sickness, deformities, mental illness, mental retardation, general ugliness and the inability to achieve a high mental state called human consciousness since the start. And every time a special person like the Buddha, Mohammad or Jesus Christ appears in our midst to teach us how to repair this mess, we make gods out of them, establishing religious belief systems filled with dogma that compound our hopeless state.

It is a scientific fact that all women are created with only the "x" chromosome, making it impossible to be male. But all men carry both the "x" and "y" chromosomes to this day, making them both male and female.

There is a possibility that Lilith had a uniquely different genetic sequence and possessed a third and yet unknown chromosome type. It would have been one that made her the perfect woman and still compatible to mate with Adam. Whatever her genetic makeup was, that information has been lost. Through genetic engineering and experimentation, however, it may still be possible to rebuild a woman like Lilith. Once she exists, the long-awaited establishment of a super race of humans may yet become reality.

The tragedy about this story is that men have never found complete fulfillment in their pursuit of Eve. She appears to have been a whore in the Garden, and by and large, she has never changed her ways. Throughout history, she has always brought out the lust in the man, but real love, that collective rise in human consciousness that we all yearn for, has rarely been achieved.

During the last century, women have strived for an equal place in society. Because of their efforts, the battle of the sexes, which has always been present, broke out into full open warfare. Men found themselves the victim of constant assault, not only on the job but in crafty advertising campaigns and television sit-coms. A perfect example is the cartoon character Dagwood who is constantly portrayed as the buffoon who must rely on his wife to get him out of trouble.

There are a lot of lonely men in the world who yearn for the sincere love of a woman. But they are not finding what they seek. Oh, the old system of boy meets girl followed by marriage seems to be going on all right. But look at the statistics. The nation's divorce rate is as high, if not higher than the marriage rate. Couples find it hard to stick it out and continue living together after their personal lustful appetites have been filled.

This is not entirely the woman’s fault. While many women are on a quest for materialism and comfort in exchange for accepting a mate, many men are only looking for a housekeeper and sexual partner. They have forgotten their ancient bond with Lilith.
​
Men secretly long for Lilith. To find Lilith, a man must turn to a spiritual path. If he can look within and learn to love himself, he will discover her because that is where she dwells. She may very well be concealed within the genetic make-up inside every male. The moment he makes this discovery, he will find love everywhere.

Lilith will be found. She exists already in the hearts of many contemporary women who have discovered the truth and are awake.