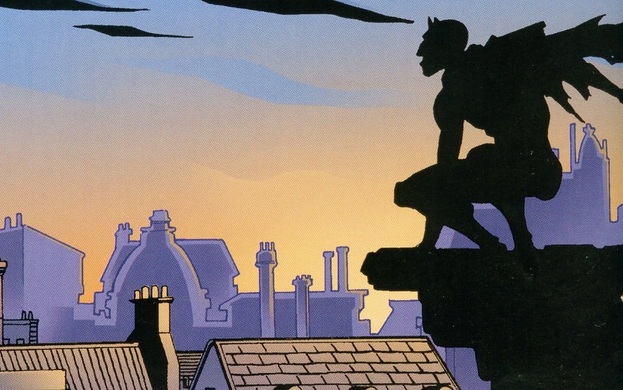 The dank foggy streets of old London after dark has been the perfect setting for such ghastly tales as Jack The Ripper and the strange characters from the pages of Charles Dickens novels. Among the lesser known stories is that of Spring-Heeled Jack.

This character, described by one researcher as the “Batman of the Nineteenth Century,” was said to have leaped high over fences and even buildings after assaulting his victims in a variety of ways. His appearances often were made in an eerie, isolated tract of land along the south bank of the Thames where robberies were so common, most folks avoided the area after dark.

As the stories are told, Spring Heeled Jack apparently made his first formal appearance in September, 1837, when he landed from what appeared to be a jump over a tall cemetery fence, landing directly in front of a businessman who was scurrying along the river, using that dangerous “shortcut” to get home after working late. The businessman, who was never identified, described the character that confronted him as having glowing eyes, pointed ears and a prominent pointed nose. He said he fled the area and escaped unscathed.

Not long after that a Polly Adams, a barmaid, was found lying in the street with her clothes partly torn from her body. She told authorities she had been attacked by a person with the same general description. She said her assailant tore off her blouse, grabbed one breast with what she described as “corpse-cold hands” and left deep scratches across her belly with his claws.

In October that same year, Mary Stevens, a servant girl, told police that a cloaked man jumped out of the shadows, grabbed her and began to kiss her face while one hand slid inside her clothing to grab one of her breasts. She warded him off by crying out and making a lot of noise which brought a number of men running to her aide.

One day after the Stevens incident, authorities said this odd appearing character jumped into the road and caused an approaching carriage to swerve and tip over. Witnesses said the creature escaped by bounding over a nine-foot high wall. They said he was laughing as he made his escape. When police arrived they found some very deep tracks in the mud suggesting that the prankster had landed from a great height. The impression also showed some kind of “gadgetry” on the bottoms of the feet and police speculated that he was using compressed springs to accomplish such jumps.

It was from this report that the newspapers dubbed the name Spring Heeled Jack. And thus the legend was born.

In January, 1838, the Lord Mayor, Sir John Cowan, revealed a letter he received from a resident of nearby Peckham describing an attack by this same character. The letter referred to the assailant as “Spring Heeled Jack.” After Cowan’s letter was made public, the newspaper was flooded with letters from other people who had similar encounters but were too frightened and embarrassed to say anything.

The stories seemed to become more fantastic as time went on. Jane Alsop, who lived with her father and sisters, said she answered a knock on the door that February to find a man in a dark cloak who first identified himself as a police officer. He said he had captured Spring-Heeled Jack and needed her to bring a light. Alsop got a candle, lighted it, and hurried to the gate. There the light revealed the man’s face, and she said it was hideous. He was Spring Heeled Jack! At that moment, he grabbed her neck, pinned her head under his arm, and began ripping off her dress. He also clawed wildly at her face and neck. A sister ran into the street calling for help and the assailant fled into the darkness.

Alsop later gave police a new and most curious description of her attacker. She said he was wearing some kind of a helmet and a tight-fitting white costume that looked something like an oilskin under his black cloak. His eyes were like balls of fires, he had claws on his fingers, and from his mouth came blue and white flames.

As the stories grew in number, Spring Heeled Jack seemed to grow in his abilities and get even more sinister in his appearance, although there was no record of anyone being seriously harmed or killed by him. He also was described as Satanic-like, with wings and horns, and belching blinding blue flames from his mouth. One story said a strange figure was seen scaling the spire of a London church, then leaping away into the darkness. Another story had Jack scaling the Tower of London.

Spring Heeled Jack’s most infamous attacks occurred in February, 1838, and the strangest confirmed sighting of him was in 1872 when he jumped into a squad of soldiers and slapped one of them. Another soldier in the group claimed to have fired a weapon at the attacker. He said there was a hollow, metallic sound as if he had shot at a metal bucket and did not seem to harm Spring Heeled Jack. The soldiers then fled as Jack belched blue flame from his mouth and nostrils.
After that, it was said Spring Heeled Jack seemed to go on a terror campaign across the land. He next appeared in Lincolnshire where he leaped over thatched cottages dressed in a sheepskin. A number of the locals grabbed their shotguns and opened fire, without any effect.

In January, 1879, Jack reportedly jumped from a tree and landed on the back of a horse hitched to a moving cart as it crossed a bridge over the Birmingham and Liverpool Junction Canal near Woodcote, Shropshire. The cart driver said the creature had large luminous eyes and was dressed in black. He said he used his whip to try to knock the creature off the horse but it held on, causing the horse to break into a wild gallop. Later the “thing” jumped off and disappeared into some trees.

Jack’s appearances slacked off after this, but he made a most dramatic appearance in September, 1904 when he was seen clinging to a church steeple in Liverpool by a crowd of people. They said the creature jumped from the steeple and landed behind a row of houses. When people ran to the scene, expecting to find his broken body, they were shocked when they met a helmeted “egg-headed” figure dressed in white. As women screamed, Jack lifted his arms and flew over the street, disappearing in the dark.

There have only been about two more contemporary sightings of this strange character. In 1920, witnesses in Warrington’s Horsemarket Street reported seeing a man dressed in a radiant-white suit jumping from the street to rooftops, and then he cleared the town’s Central Railway Station in one great leap. He was not seen again.

So what was this creature? That this peculiar entity managed to jump from the ground to the tops of houses, and jump from a church steeple to the ground, and take bullets to his body without apparent injury makes it superhuman. Thus the existence of Spring Heeled Jack probably cannot be ruled as a hoax.

That it was often observed by large numbers of people, and even a group of soldiers who not only had physical contact, but attempted to shoot it, appears to rule out myth and legend. Also the local police held investigations and found odd prints in the mud, proving that something, indeed, was there.
​
The facts in this strange case reach beyond known rules of science, physics and the known rules of human behavior in our own three-dimensional space. Thus we must consider the possibility that Spring Heeled Jack was, indeed, something from outside the realms of our own reality.