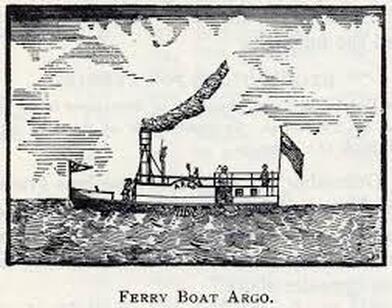 By James Donahue
​
The first riverboat plying between Detroit and For Gratiot, a place located near where Port Huron, Michigan now stands, was the Argo, an odd-looking craft built by Capt. John Burtis of Amherstburg, Ontario, in 1828.

Huck Finn, a fictional character created by American author Mark Twain, would have liked the Argo. It was basically a motorized raft. D. B. Harrington, editor of the old Port Huron Commercial, was a passenger on the Argo’s first trip up the Detroit and St. Clair Rivers to Fort Gratiot. He said the vessel was built on two large hollowed-out pine logs, joined together. It had a sharp bow and square stern. A deck was built on top of the logs, and a four-horsepower steam engine that ran side-wheels was mounted on the deck.

The ship’s original dimensions gave her a peculiar appearance: she was forty-two feet long but only five feet wide. Harrington said the cabin of the Argo was no more than canvas stretched over upright posts to serve as a windbreak. Burtis apparently built his steamboat on the Thames River in Ontario, then brought it to Detroit and loaded cargo for a first trip up the rivers in October 1828.

The Argo attracted a lot of attention at Detroit. It might have been the second steamboat to ever visit there. The Argo arrived only twenty-one years after Robert Fulton took the Clermont up the Hudson River at New York, and five years after the Walk-in-the-Water made its first trip up the rivers and into Lake Huron.

Many of the town’s dignitaries, including Michigan Governor Lewis Cass, came to the waterfront to see the Argo off on her maiden trip. Harrington described the event: “Sea stores were laid in accordingly and steam got up at 8:00 AM on the day of her departure. After considerable swaying at the hawsers, the word was given ‘all aboard,’ the captain ordered the lines cast off, and away she flew at the rate of about two miles an hour. Hers was a high pressure engine, and the noise made in exhausting steam resembled much the barking of a lap dog, while the smoke which issued from her chimney could scarcely have shamed an old Frenchman’s pipe.”

Passengers quickly found the Argo to be an “extremely cranky” craft that took “an alarming list at the least shifting of the passengers,” another account stated. At one point, the Argo struck a fishing spike jutting up from the river bottom and nearly capsized. It took two days for the vessel to huff and puff her way up the river. She arrived at St. Clair at about eleven o’clock the first night and tied up at Brown’s wharf. The passengers were lodged in a local hotel. The Argo arrived at Fort Gratiot the following evening at about sunset.

Burtis took the Argo back to Detroit the next day and tied her up for the winter. He spent the time redesigned his craft. He expanded her width another four feet, making her more stable in the water, and built a closed-in cabin. The Argo then made regular trips between Fort Gratiot and Detroit for the next three years.

After the steamer General Gratiot was put in service about 1830, the little Argo was put out of business on that run. The General Gratiot was a real ship that hauled more cargo and made the same trip in sixteen hours instead of two days. Passengers found the ride not only faster, but more comfortable.
Burtis sold the Argo in 1832 to L. Davenport, who used it as a ferry between Detroit and Windsor. After the vessel was scrapped, the Argo’s engine was taken to Grindstone City, Michigan, where it served for many years at the quarries.