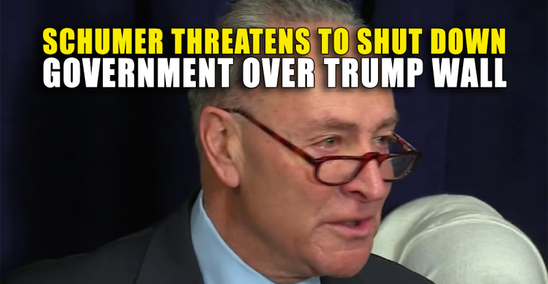 There appears to be some hope for America after all. Congress is standing up to Trump’s insane projects at last. His request for $1.4 billion to be added to the proposed spending bill now winding its way through the Hill appears to be failing in both the House and Senate. That spending bill is necessary to keep the government operating after April 28.

Guess what? Mr. Trump now threatens to veto the spending bill if it doesn't include the money he wants for his wall at the Mexican border. If he does this it will effectively shut the government down on Saturday, April 29.

A report in the Wall Street Journal notes that no member of the U.S. House of Representatives or the U.S. Senate from the Mexican border states, California, Arizona, New Mexico or Texas supports spending that money to build that controversial wall. And that is because their constituents in those states oppose the wall. Americans seem to like their current relationship with the people of Mexico; many of whom are living among us.

But Trump is playing a game of chicken over this budget request. This seems to be because his other projects . . . the repeal of “Obamacare” and approval of a poorly designed GOP healthcare bill went down in flames. His other failures: it has been shown that he attacked the Syrian airbase with 59 costly Tomahawk missiles without justification, and he made a ridiculous showing in his alleged standoff against North Korea last week when his naval armada ended up steaming in the wrong direction.

Mr. Trump now finds himself to be the world joker.

This past weekend on Earth Day, hundreds of thousands of protesters against Trump’s assault on the environment marched in cities all over the world. It was called a march for science and was joined by many scientists who oppose the Trump Administration’s support for the coal industry, extensive off-shore drilling, lifting of EPA standards for clean air and water, and endorsement of completion of controversial oil and gas pipelines in the United States.

A successful shutdown of the government by April 29 will be just one more proof of a failed Trump presidency within weeks after it all began. Most Americans would rather see the money Trump wants to use to build a useless wall on the Mexican border for rebuilding highways, construction of high speed railroad lines, and restoring electric and Internet services as well as rebuilding deteriorating water and sewer systems.

We don't like the constant threat of more war.

The people also like Bernie Sanders’ plan for expanding Obamacare into Medicare for everybody.