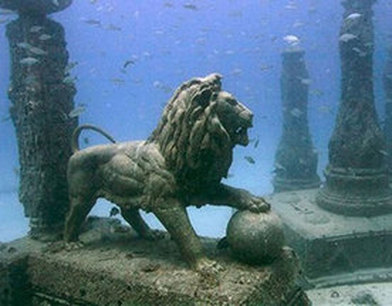 A popular tourist attraction in China is Qiandao Lake, a man-made lake formed after completion of a 1,531-foot-wide Dam on the Xin’an River at Zhejiang. The lake is nestled within a lush forest and offers literally thousands of exotic islands.

At the time the Xin’an Dam was constructed in 1959, it was part of a massive new hydroelectric system and towering at 344 feet, was considered the tallest dam to have ever been built in China.

Hidden 130 feet under Qiandao Lake rests Shi Cheng, the Chinese name for Lion City. It is an ancient city full of temples, memorial arches, paved roads and houses that they say stand frozen in time since the day they were submerged as the lake filled.

But there is more. It seems that the construction of the hydroelectric system also flooded the nearby ancient City of He Cheng, plus another 27 towns, 1,377 villages and nearly 50,000 acres of farmland. Thousands of homes were flooded and about 290,000 people had to be relocated.

Lion City stood at that site since the Eastern Han Dynasty, estimated at about the time of Christ. It rested at the base of Five Lion Mountain, thus took its name from the mountain that towered over the town. For centuries Shi Cheng remained a center of politics and economics for the eastern province of Zhejiang.

Shi Cheng, which had its origins during the Tang dynasty about 1,300 years ago also existed as an important political and business hub along the Xin’an River.

Area divers, led by Qiu Feng have been exploring the city. They say the buildings stand completely intact. Even the wooden beams and stairs are in place as they were half a century ago. Lion City thus remains a “time capsule” from the past.

Feng has proposed using the submerged city as a visiting place for world diving clubs.

Already there are hourly buses that bring tourists to Qiandao Lake from the provincial capital Hangzhou, and an expressway links Hangzhou, the lake and the Cities of Huangshan and Anhui.

Some property along the lake is being developed for private residential and tourist use.

Qiandao Lake was the scene in 1994 of a deadly fire on a boat filled with tourists from Taiwan. The fire, which was said to have been caused by arsonists, killed 32 people.