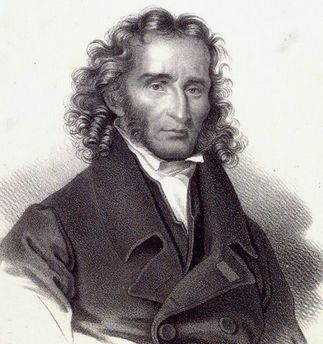 Niccolo Paganini, the great Italian violin virtuoso, is proclaimed to have been the greatest violinist who ever lived. His compositions and his renditions were so amazing they said it drove people who heard his music to tears. His ability to play three octaves across four strings in a hand span is still considered nearly impossible. Of the 24 Caprices he composed, few other violinists have been able to play them.

That he accomplished such amazing fetes led to a belief by many that Paganini was believed to have made a pact with the devil that allowed him to perform almost supernatural displays. That he was known for his performance of Le Streghe, which translates to Witches’ Dance, only enhanced the rumors of a diabolical pact.

The rumors were so well implanted in Paganini’s world that the Catholic Church denied him the Last Rites and his body was denied a church burial in Genoa, the place of his birth.

Paganini was born in 1782 the son of a shipping merchant, Antonio Paganini, who also excelled at stringed instruments. He began learning to play the mandolin from his father at the age of five, and soon graduated to the guitar, which became his favored instrument. The elder Paganini introduced Niccolo to the violin during those early years.

While he preferred the guitar, the young Paganini was quickly recognized for his musical talents and was awarded scholarships for violin lessons. He also studied under theatrical tutors where he learned harmony and counterpoint. With this knowledge he began composing music for violin. He studied under several violinists, soon becoming so well talented that by the time he was 18, he was appointed first violin of the Republic of Lucca.

The region was falling under the rule of Napoleonic France in those years. When Lucca was annexed to France and the region was ceded to Napoleon’s sister, Elisa Baciocchi, Paganini became a violinist for her court.

As his fame grew Paganini began touring concert halls throughout Europe. It was said that his music was so sensitive that audiences burst into tears during some of the most tender passages. This was the time when his reputation took on mythic substance.

He eventually grew restless and returned to the life of a virtuoso, touring Europe, amassing wealth by enchanting audiences with the ferocity or sensitivity of his playing—audiences were said to have burst into tears at his execution of tender passages.

One patron was purportedly so moved by a performance that he gave Paganini a coveted Guarnerius violin. Another vowed he had seen he had seen the devil helping Paganini with a particularly impassioned performance. There were two physical characteristics that historians attribute to his unique ability to perform as he did with the violin. He had particularly long limbs and fingers, and he had extraordinary flexibility. Some called him the "Rubber Man." That he could perform stunts like sever the violin strings and play a complex piece such as the Witches Dance on a single string left the audience in awe. Eventually he earned the title "Devil's Violinist."

Ironically during this high time in Paganini's life, Pope Leo XII dubbed him a knight of the Golden Spur. This was in 1827. Only 13 years later, as he lay dying, the Genoa church refused to give Paganini the Last Rites because of the stories about an alleged pact with the devil.

There was a dark side to Paganini's life but it had little to do with satanic pacts. It was said he suffered a bout with alcoholism while still in his teen years, but managed to recover and become a serious musician by the time he was 22.

But bad health plagued Paganini throughout his life. He was reputed to have been afflicted by Ehlers-Danlos syndrome that made his joints unusually flexible. Because of his extravagant lifestyle he suffered from syphilis which was treated with mercury and opium. He thus suffered the side-effects from the drugs. Late in his life, in 1934, he was treated for tuberculosis, which probably drove him to an early grave only six years later.
​
He retired from the concert stage that same year and devoted his last years to composing the publishing music. He died in poverty in 1840. His body was interred in a Parma cemetery in 1876 after an appeal to the Vatican.