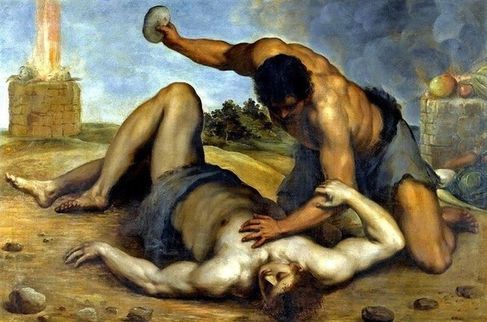 Cain And Abel; Did They Exist?

I have written fervently against the religious belief systems and especially Christianity as destructive fear-based systems that tend to block true spiritual pathways that humans need to follow. Consequently, readers may find conflict in the fact that I like to use the Bible as a reference point for many historical and even spiritual landmarks.

I do this because the Bible, among the oldest surviving documents in existence, is still regarded as a historical record, albeit twisted by religious doctrine.

Thus the story of Cain and Abel, allegedly the first sons of Adam and Eve, need to be examined with some care. The story is a record of the first recorded murder in human history.

As most people know, the two brothers were farmers of a different sort. Cain grew crops while Abel raised sheep and other domestic animals. As part of the Hebrew custom, the brothers were expected to make sacrificial offerings to the Elohim, a strange multiple deity that appeared to talk to itself. The Elohim reportedly praised Abel who killed animals and put their blood on an alter. But it rebuked Cain because his offerings came from the fields and were bloodless.

The Elohim obviously was not a vegetarian. Out of jealousy, Cain, the kind vegetable farmer, killed his brother the sheep farmer who had no problem slitting the throats of his sheep and spreading the blood on the altar.

The slaughter of animals, according to Hebrew legend, was part of an early covenant between The Elohim and mankind following the fall in the garden. The blood offering was a symbolic gesture that replaced a demand for a human sacrifice. And this, of course, stemmed from primitive belief systems that preceded Judaism and Christianity. Eventually, according to Christian doctrine, Jesus Christ was a god-man sent to Earth to become that ultimate blood sacrifice.

When you think about the story, it is extremely barbaric. Yet well-educated Christians, even today, are caught up in this primitive story and claim to believe it.

It has been one of the most wicked hoaxes ever perpetrated on both mankind and the animal world. Over the years thousands, if not millions of innocent creatures were needlessly slaughtered just so someone could “cover their sins” on a pile of stones that comprised an altar.

If humans were vegetarians at first, the animals were domesticated and raised for wool, milk and eggs. They also were raised for sacrificial slaughter. Thus few domestic animals lived full lives. They all were destroyed before their time by having their throats slit.

Anyone that has ever visited a slaughterhouse knows just how ugly the killing of animals can be. It is not a kind way to destroy any animal. The killing involves cutting open the jugular vein and then hanging the creature, still alive, kicking and bleeding by its hind feet to get the blood completely drained before it dies. If not “drained,” the blood apparently ruins the value of the meat.
But the gods of the people were said to have liked it. Like grinning vampires, they accepted the gallons of blood sacrifices that occurred over thousands of years. It may still be going on in some parts of the world.

Is the story of Cain and Abel true?

Surprisingly, the same story is told in numerous other writings and the legend is part of the historical and religious writings of at least four other world cultures. Also Cain was said to have fathered children and built cities. It is obvious the brothers were not cave dwellers.

From the Koran we find a story of the two sons of Adam. When one of the sons threatens to kill the second over a dispute concerning the offerings, the second son responded in a strange way:
“God only accepts from those who fear,” said Abel, the second son. “If thou dost stretch forth to me thine hand to kill me, I will not stretch forth mind hand to kill thee (I will not defend myself). Verily, I fear God, the Lord of the worlds. Verily, I wish that thou mayest draw upon thee my sin and thy sin, and be of the followers of the Fire, for that is the reward of the unjust.”

As the story continues, the first brother slew the second brother anyway, and “in the morning he was of those who lose. And God sent a crow to scratch in the earth and show him how he might hide his brother’s shame (bury the corpse).” The story concludes with Cain repenting.

He probably killed a sheep and made a blood sacrifice to cover his sin.

From the Palestinians comes the story of Kabil and Habil who disputed over which of the sisters in the family to marry. When it came time for them to bring offerings to Allah, Kabil’s offering was a sheaf of the worst of his corn, while Habil slaughtered the finest lamb from his flock.

The anger, reflecting his jealousy, flared again when Allah visibly accepted the blood slaughter. When Kabil threatened to kill Habil, Habel answered: “If you stretch forth your hand against me, to slay me, I will not stretch forth my hand against you to slay you, for I fear Allah, the Lord of all creatures.”

Thus Kabil, guided by the Devil, killed his brother. Then, not knowing what to do with the body, Kabil carried it on his shoulders until it began to stink. Then Allah taught him to bury it by showing him a raven that killed another raven in his presence and then dug a pit with its claws and beak to bury it.

Ancient stories from Turkey bring the dispute back to the conflict over the fair sister. It appears that both brothers were born with twin sisters, but the sister of Cain was more attractive than Abel’s sister, and both brothers wanted her as their wife. But Cain was commanded by God Most High to take the other sister.

"But Cain loved that girl exceedingly; so he went and slew Abel. Thus because of a woman was blood first shed upon the ground,” the story reads.

The legend from Italy claims a dispute between the brothers over wealth. It appears that Abel became very profitable while everything Cain attempted ended in failure. Thus Abel accumulated livestock and goods enough to survive times of famine.

Cain went to his brother and asked him to share half of his wealth. But Abel said: “If I give you a sum which you yourself could gain by industry, you should still labor as I do, and I will give you nothing, since, if you will work as I do, you will become as rich.” (He was the first Republican)

When an astrologer came to Cain and gave a prophecy of seven years of famine, Cain panicked. He decided to slay his brother and gain his store of goods “thus I will take care of myself, and my brother will be dead.”

So Cain killed Abel with a knife, and then dressed himself in Abel’s clothes and went into the city disguised as the merchant Abel. But he was found out and God thus imprisoned Cain in the moon where he was to “behold the good and the evil of all mankind. Cain also was cursed to carry a bundle of thorns that constantly stung him and drew blood. And because he involved himself with sorcerers and conjurers, Cain was sentenced to be compelled to do the will of sorcerers.

And from Polish archives is found a story of a raven that scratched a hole in the earth to bury a baby bird that had fallen from its nest to perish. From this act Adam and Eve learned how to dispose of the corpse of Abel, who had been killed by Cain. So they made a hole in the earth, laid Abel’s corpse in it, and covered it with earth.

This was the first recorded grave.

So was the story of Cain and Abel true? Since all of the known legends come from approximately the same part of the world, it is possible that the story was passed from tribe to tribe, and after years of being told, became imbibed with the cultural beliefs and legends of the area.

The significance of the story is that sometime in the distant past, and after the genetic spark that made him human, mankind was forced to face and deal with human disagreements leading to someone's death.
​
No matter how it happened, this was a significant milestone and triggered a story that was told and retold for thousands of years until it was put into words on parchment.