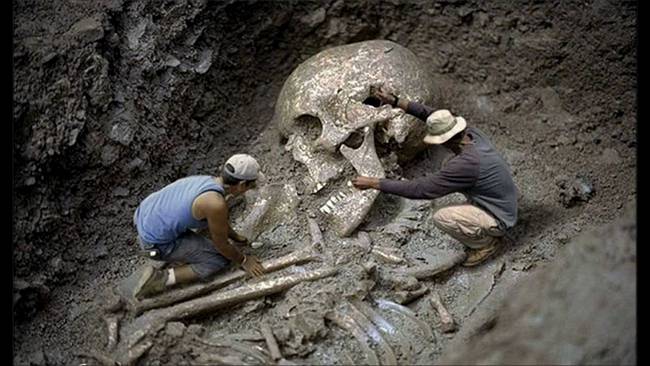 Giant Everything On Ancient Earth?

“There were giants in the earth in those days; and also after that, when the sons of God came in unto the daughters of men, and they bore children to them, the same became mighty men which were of old, men of renown.”

This strange quote from the Book of Genesis has captured the attention of theologians, scientists, anthropologists and sociologists, all puzzling over the implication of the story. Some, like authors Zecharia Sitchin and Erich von Daniken have stirred controversy in books suggesting that it is a story of alien intervention and the manipulation of the DNA of earth primates to create modern humans.

Michael Tellinger, the latest member of a growing circle of lecturers, writers and thinkers on the subject of human origins has revealed the discovery of a giant human footprint, located in granite near Mpaluzi, South Africa, that strongly supports the Genesis story. The print was discovered by a local farmer in 1912 but for some reason ignored by archaeologists and historians, probably because it defied the accepted story of human history.

In his books and Internet blog writings, Tellinger notes that the foot print is about four feet long, suggesting that the humanoid that left it stood approximately 24 feet tall. Because of the way granite formations occur on the planet, the age of this foot print is estimated between 200 million and 3 billion years.

Tellinger’s findings suggest that humanoid giants were walking this planet at the time of the dinosaurs, or even for millions of years earlier. The fossil record shows that the dinosaurs first appeared about 230 million years ago and hung around until the end of the Cretaceous period, about 65.5 million years ago.

What we know is that the dinosaurs were giant vertebrates. It seems fitting that if humans existed among them, they also were large.  So if the animals and the humanoids were giants, was everything on Earth part of a super sized kaleidoscope of plants and animals all sharing the planet?

Other fossil discoveries may help support such a world. One recent news report in the journal Nature told of the fossils of fleas discovered in China that measured 0.8 inches long, about 10 times larger than fleas found on the family pets today. Dating back about 165 million years, it was estimated that the fleas had to be that big to penetrate the thick hides of the giant beasts to suck their blood.

The fossil record of one of the earliest known forests in the world was found at a quarry at Gilboa, New York in the 1920s. A new construction project in the area has revealed for the first time the forest floor as it looked some 280 million years ago, even before the dinosaurs made their appearance.

The New York Nature site described the Gilboa forest as a complex maze of massive plants, trees and vines unlike anything that has existed in known human history. The article told of “towering 100-foot-tall club mosses and 50 to 90-foot-tall horsetails” dominating a marshy tropical lowland. It said “the club mosses, or lycopsids, were bizarre-looking trees with scaly-barked trunks that bore leaf scars in spiral patterns, flourished branches from their crowns, and sprouted spiky leaves.”

The giant horsetails “had trunks jointed like bamboo, with branches extending from each raised joint, or node, and bearing circlets of leaves and cones.”

Other fossil findings from that period show that even the insects were large. There were dragonflies with 30-inch wingspans and the Eryops, the amphibian that evolved into the modern frog, was six-feet-long.

We have here a picture of an ancient world filled with giants. Everything was super-sized. The questions are, why did it happen at that time and why has everything grown smaller in the world as we know it today? Some kind of change obviously happened that forced the ancient frogs, dragonflies, horsetails and even some of the dinosaurs to evolve in a much smaller size to survive in the present environment.

Scientists who have studied the flood story, and the strange sudden freezing of giant extinct beasts like the hairy mammoth and the saber-tooth tiger in the frozen muck of the northern tundra, have theorized that a vapor canopy once existed in the upper earth atmosphere. They theorize that this canopy collapsed, causing the great flooding and bringing about extreme weather and environmental changes.

Had such a copy of moisture existed in the early stages of the evolution of our planet, it is suggested that it would have caused an even warm, moist environment blanketing the entire planet. This would explain why the animals were grazing on the tundra and in other places where they should not have been when things turned to extreme cold. It also might account for the giant size of the living creatures.

All we can be sure of is that the fossil record show that our planet has a stranger history than we ever imagined.