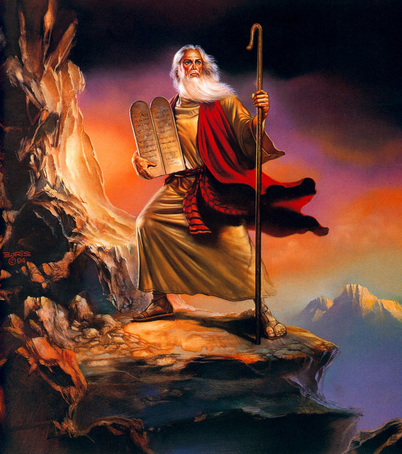 The Other Ten Commandments

There has been a belief among most people in the United States that the Ten Commandments are God’s ultimate guide to human morality. The commandments, as proclaimed in Exodus 20, have been published in Christian literature, posted on office walls and inscribed in stone and placed in front of public buildings.

Not everybody agrees with the importance of those Bible verses, however. And there is good reason for the doubt.

Students of Bible know that Moses allegedly made at least three trips to Mount Sinai, once spending 40 days and nights under a cloud, and then emerged carrying two stone tablets “written with the finger of God” that contained not just the original ten commandments, but a long list of laws including detailed instructions for building a temple.

But while Moses was on the mountain, Aaron, the high priest of the camp, submitted to the demands of the people, called upon them to give him their gold jewelry, and used it to carve a calf, which the people were worshiping when Moses returned. In his anger Moses smashed the tablets made by God.

In Exodus 35 we are told that God ordered Moses to prepare new tablets and bring them back on the mountain where a second list of commandments will be delivered.

This second list of commandments is quite different from the first. God ordered the people to:

--Avoid making treaty with the people already living in the land because they worship false idols and “will be a snare among you.” He demands “Do not worship any other god.

--Do not make any idols.

--Celebrate the Festival of Unleavened Bread. For seven days eat bread made without yeast.

--The first offspring of every womb belongs to me, including all the firstborn males of your livestock. Redeem the firstborn donkey with a lamb, but if you do not redeem it, break its neck. Redeem all your firstborn sons.

--No one is to appear before me empty-handed.

--Six days you shall labor, but on the seventh day you shall rest.

--Celebrate the Festival of weeks with the first fruits of the wheat harvest, and the Festival of the In-gathering at the turn of the year. All your men are to appear before the sovereign Lord, the God of Israel.

--Do not offer the blood of a sacrifice to me along with anything containing yeast.
Bring the best of the first fruits of our soil to the house of the Lord your God.

--Do not cook a young goat in its mother’s milk.

Exodus 35-28 then said Moses “wrote on the tablets the words of the covenant, the Ten Commandments.”

In other words, the stone tablets that were brought before the people and allegedly placed in the temple were tablets chiseled by Moses, not a spiritual God. The only evidence we are given that Moses may have really been in contact with God was that his face was shiny when he first came down from the mountain. It was written that he had to cover his head because it blinded the people.

This is the story as we read it in the Book of Exodus. The big question, however; if Moses smashed the original tablets and had to cut new ones, why do the original commandments also appear in the early part of Exodus? Why do we have two different “Ten Commandments?” And why is the second list so directed to Hebrew religious practices of that day?

Bible critic Michael Runyan notes that among the published list of Ten Commandments, “only five have a meaningful impact” on the human concept of moral living. They are the basic laws against theft, perjury, murder, adultery and a demand that everybody honor their parents.

Runyan reminds us that the commandments devote most of their attention to the worship of god and miss other important issues like slavery, bigotry, rape, torture, and racism. To be fair, most of these issues and then some are included in the long list of other commandments listed in Exodus and the other Books of Law that appear in the Old Testament. You just have to hunt to find them.

But if we were to accept a basic set of Biblical laws to be published and posted in public places everywhere, Runyan suggests that “an all-knowing, all-wise, all-discerning supernatural god would have devised a much better set of rules . . . a set that would have placed humanity on a more peaceful, loving and kind trajectory than the one we have experienced.”
​
The final commandments delivered by Moses offer little practical value to anyone other than perhaps the devout Jewish cults that still exist today.