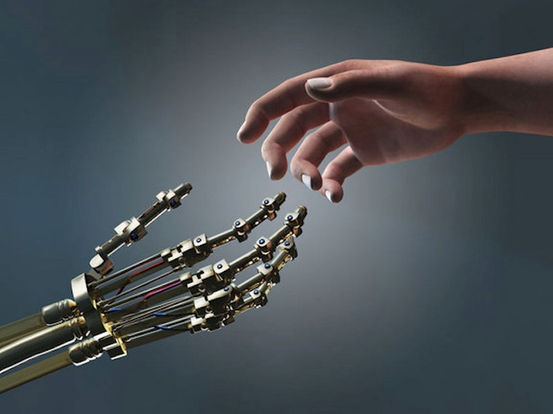 A Future World With Androids?

Modern researchers appear to be making great strides in the field of robotics. They have managed to make machines that look, speak and act so much like real humans they are unnerving to anyone that comes in contact.

Unnerving because no matter how realistic the robot looks like a living human, people can always sense the difference. The machine lacks the subtle light of the soul . . . that glow of the aura that we humans and even the animals and plants around us cast off as part of the magical way all living things communicate in subconscious ways.

But the robotic corporations are plunging ahead with their work, designing androids that produce the sounds and even the feeling of living flesh, and the ability to do much of the mundane work of humans. Already androids are be assembling the cars we drive, our electronic toys, and even new androids. They answer telephone calls, assist surgeons in delicate operations and some extremely tiny androids are being developed that will work through the human body searching for and repairing medical problems. Some believe they will soon be capable of sitting before nightly television cameras, reporting the nightly news. Of course the idea of using them as sex toys is ever present. Can men ever think of falling in love with a machine?

Spokespersons for A-Lab in Tokyo say they have been working on this concept now for the past 20 years and have achieved an android that looks and behaves so much like a real human it astounds all who look upon it. The big problem is that there is still a need to perfect the feel of the skin and the facial expressions, and make the arms and torso respond with a natural fluid body language. They predict that it may take another ten years before the perfect android goes on the market.

They day may soon come when androids will be walking the streets among us, and that it will be almost impossible for us to tell the difference between the robot and the real human.

The scary thing about the android is that it remains a machine. It can work on a job around the clock without having to rest. It feeds on energy that can be supplied even as it works. It lacks human emotions so there is no petty bickering among workers, no secret petitions to create unions that threaten to strike for better pay. In fact, once purchased, the robot will work without stopping until its parts wear out. Then after repairs are made, it can be brought back to the job again.

So what will robot technology mean for human workers? It is already bringing about a dynamic shift in the whole concept of slave labor for big corporations. Without jobs, and without weekly paychecks, human lifestyles are soon going to be forced into dynamic change.

And this leads us to another interesting idea. Has it always been human destiny to labor for our daily bread? If machines can be manufactured to do all of the work for us, what will we be doing with our time? Granted some people will be needed to program and maintain the androids. And there is a call for creative engineers to dream up, design and institute new machines, new devices and new ways of solving human problems.

We will enjoy a lot of free time for creative enterprise. Imagine devoting our lives to writing great novels, painting great portraits, or exploring unknown realms in science, space and the Earth under our feet.

To make these kinds of dreams come true, however, we must accomplish a few important tasks. It is necessary that we put a stop to war and killing. We must find a way to dethrone the kings with all of the wealth, and put money back into circulation. We must stop ravaging the planet’s natural resources. We must learn to love and protect our planet. And we must unify the world as a common form of government, designed not to enforce severe law, but protect the individual from imposition by marauders.

We must return to Eden.
​
It is still not too late. There is a fork in the road just ahead. The choice is ours as to which direction we travel.