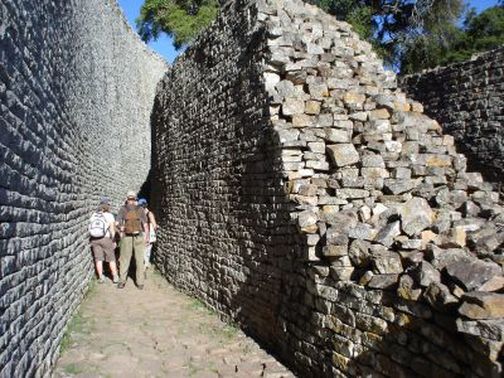 In the year 1531, Vicente Pegado, Captain of the Portuguese Garrison of Sofala, a large settlement at Mozambique for the purpose of mining the gold reserves in southeast Africa, came upon amazing ruins that appeared to have been built by giants.

He described the ruins, now identified as Great Zimbabwe: “Among the gold mines of the inland plains between the Limpopo and Zambezi rivers there is a fortress built of stones of marvelous size, and there appears to be no mortar joining them . . .  This edifice is almost surrounded by hills, upon which there are others resembling it in the fashioning of stone and the absence of mortar, and one of them is a tower more than 12 fathoms high.”

The ruins form three different parts, each enclosed within massive curving stone walls. Archaeologists and historians have been divided over the possible origin of the ruins. Most of them believe the builders were members of the Gokomere culture, ancestors of the Shone people who now occupy Zimbabwe.

The complex spans 1,780 acres and the cities may have housed up to 18,000 people.
Because of artifacts found at the site, it is believed Great Zimbabwe was settled in the Fourth Century and that the African natives who erected the city used it as the capital. They mined the gold, worked iron and farmed the valley.

Because of the pottery, iron gongs, elaborately worked ivory, iron and copper wire, iron hoes, bronze spearheads, copper ingots and gold beads, bracelets, pendants and sheaths, it is believed that the people were advanced; that they were involved in extensive trade that may have even reached China. Chinese pottery and coins were among the artifacts found at the site.

It is believed that gold and ivory were the most treasured items used in trading. Some estimates suggest that over 20 million ounces of gold were extracted from the Earth at Zimbabwe.

Since there are three different complexes, or “cities” built in similar patterns, it is theorized that each one represented the work of successive kings. Each new ruler required construction of a new city.

Another theory is that the circular enclosures had different functions. One served as a temple, a valley complex was for the people, and the Great Enclosure was built for the king.
​
These are the official archaeological and historical theories involving the ruins known as Great Zimbabwe. Then there is Enki’s story as told in the strange collection of ancient clay tablets recovered in the ruins of Sumaria.

Enki, we are told, is a giant visitor from the stars who came to Earth with a delegation of his kind to mine gold. They found the gold in Africa and used advanced scientific technology, cross breeding and DNA experimentation to turn Earth humanoid creatures into modern Homo sapiens. The purpose was to create slaves to mine the gold.

According to the Enki text, Great Zimbabwe with its 12-fathom high tower, was Enki’s headquarters and the location of the laboratory experimentation. Also involved with the work were Ninmah and Ningishzidda.

The walls at the complex were made of bricks made from a mixture of granitic sand and clay. The outer wall towers 250 meters. Enki’s palace was located in the heart of thousands of miles of 12-foot-wide lanes, or roadways, lined with granite boulders. They were engineered for the transportation of water, gold and machines.
​
All of this amazing engineering was going on an estimated 5,000 to 6,000 years ago, the Sumarian text implies.