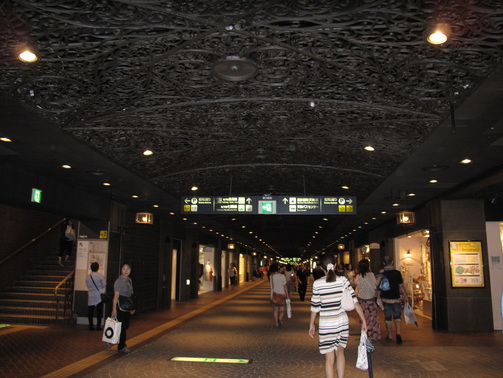 Humans appear to be motivated to build tunnels, caverns and even entire cities under the surface of the earth. We supposedly do this for purposes of safety in the event of nuclear attack or adverse weather. We suspect the militaries like to go underground to hide arsenals and other weapons of war from observation by spy aircraft always scanning from the skies.

Whatever the reason, there have been constructed entire underground cities in some parts of the world. Some of these places are well known as unusual tourist stops. Others not so much.

Probably the largest and most famous underground city network is the RESO, which exists below Montreal, Quebec. It consists of 20 miles of underground tunnels and ground-level interior walkways, connect hotels, apartment buildings, offices, shopping malls, movie theaters, super markets and all of the other trappings of the city. The different parts of the underground city are connected by a subway system. Thus the people of Montreal can leave their above ground apartments and travel underground to work, have lunch, attend a symphony performance, shop for groceries and never step outside.

Another Canadian city, Toronto, has constructed a similar underground tunnel system known as PATH. It is an underground walkway and subway system linking 17 miles of shopping, services and entertainment. It offers 4 million square feet of retail space with about 1,200 shops and services employing about 5,000 people. The city promotes its underground city as a safe haven from  winter cold and snow and summer heat. Many shops and parking lots above ground are directly connected to PATH.

Japan also has a number of underground networks, much like those in the Canadian cities. While they are each smaller, it said said that overall an estimated 76 underground shopping malls and tunnels totaled over 900,000 square meters of floor space in 1996. Construction has been continued since that date.

Even obscure places like Moose Jaw, Saskatchewan, have underground networks of tunnels once used for shops, factories and even homes. The caverns are vacant today but it was said they were used as recently as the Nineteenth Century.

An abandoned network of tunnels, shops and homes also exists under Portland, Oregon. Built during the Prohibition, the shops were mostly used as speak easies. They were called the Shanghai Tunnels because unwary sailors who went there to drink were often drugged and carried off to serve on sailing ships.

Secret passageways, tunnels and underground shops, now abandoned, also exist under Havre, Montana. Like the Portland underground city, the tunnels under Havre came into existence during Prohibition. Not only did bootleg liquor establishments exist there, but also a flourishing narcotics and bordello trade.

Major world cities like Paris, France, also have their mysterious underground catacombs. The Paris catacombs are well known. The consist of a labyrinth that includes a limestone quarry that was used in the buildings, monuments and bridges in the city above. A macabre aspect of the Paris tunnel network is that portions of them were used as a mass grave for more than six million people who perished during the French Revolution.

The strange city of Setenil De Las Bodegas, Spain is built partly above ground and partly below and inside a wandering network of caves and rocky cliffs. It is considered among the strangest places in the world where people live and work.

In Turkey can be found the ruins of entire cities and tunnels that were carved in the rocks and natural outcroppings by the Cappadocians, a people who lived in that part of the world before the nation of Turkey ever existed.

Yet another underground ancient Turkish city known as Ozkonak, discovered in 1972, was large enough to have been the home to as many as 60,000 people. It is constructed on strata of volcanic granite, each connected by tunnels on the slopes of Mount Idis. The city had a water well, elaborate ventilation system, a winery, tubes linking the various levels believed used as a communication system, and moving stone doors.

The New York Times reported in 1996 that Russia was constructing a massive underground city and possible military base at Yamantau Mountain, in the Ural Mountain range, under the City of Mezhgorye. The project is believed to be of military importance since it was started during the height of the Cold War. The complex is said to be the size of Washington. D. C., and can be entered by railroad and highway. It includes living quarters, an underground warehouse for food and clothing and government offices in the event of nuclear war.

Russia also has reportedly been building thousands of survival shelters, many of them under Moscow.

The European Union has constructed a Doomsday Seed Vault in the high arctic. The vault is storing millions of seeds from plants and food crops all over the world to guard against a catastrophic event.