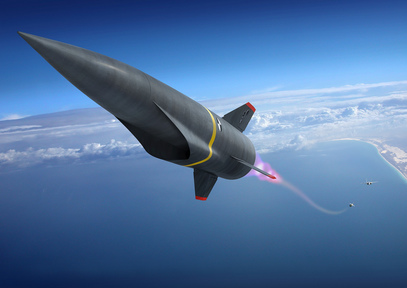 China’s announcement in November of a successful test flight of an ultra-fast maneuvering strike weapon – the DF-ZF hypersonic glide vehicle, launched from a ballistic missile after it had been fired, appears to have opened the door to a new world horror.

It seems that Russia and the United States also are developing hypersonic weapons capable of delivering nuclear warheads anywhere in the world in minutes. Reaching unbelievable speeds of over 7,000 miles per hour, these new weapons can reach the other side of the world within minutes.

This means that the next world war could be fought and concluded in less than a day, if military leaders are so foolish to ever decide to push the button.

The annual report of the congressional U.S.-China Economic and Security Review Commission, released in November, 2015, noted that China’s hypersonic glide vehicle could be deployed by 2020. It said a separate high-technology ramjet-propelled cruise missile could be ready by 2025.

The DF-ZF separated from its launcher near the edge of space and then successfully glided to an impact range several thousand miles away in western China. The flight on November 23, which was the sixth known test by the Chinese, was tracked by U.S. intelligence agencies, who confirmed the story.

Russia also is in the midst of developing a similar ultra-high speed strategic attack vehicle similar to China's weapon. The Novosti news agency reported in 2013 that Russia was cooperating with China, France and India on the development of hypersonic missiles.

Jane’s Intelligence Review reports that the Russian hypersonic vehicle, the Yu-71, has been a top-secret project so little has been learned about it. Jane’s reports that a test firing of the Russian vehicle in February, from an SS-19 missile in near space apparently failed.

The report means that the Russians have a vehicle and are on the verge of turning it into a weapon of warfare.

Russian military analyst Alexander Shirokorad talked about the Russian program for the newspaper Nezavisimaya Gazeta in 2013. He said the new weapons “will breach a missile defense by traveling along exotically variable trajectories. The combination of hypersonic cruise missiles with ballistics is not ruled out.”

He said the weapons will be capable of striking naval targets at sea, including submarines.
So where is the United States in the midst of all of this new war technology?

The Falcon Hypersonic Technology Vehicle 2 (HTV-2) has been under development by Lockheed Martin Corp. Developers said they expected the vehicle to hit speeds of up to 13,000 miles per hour after launch from a missile.

Two test vehicles were built and tested. The first test flight in April, 2010, failed nine minutes after launch. It began to roll violently and then plunged into the sea. The second flight in August, 2011 successfully separated from the booster and entered the glide phase, but then dropped into the Pacific Ocean.

That was the last active part of the Falcon program. The Hypersonic Cruise Vehicle program is believed to still be in development. Like the Russians, U.S. intelligence is keeping whatever the nation has done since 2011 a big secret.

All that is known is that the Defense Advanced Research Projects Agency (DARPA) and the U. S. Air Force is focused on high-speed tactical deployment to “penetrate air defenses and hit targets quickly from a safe distance.”

The big problem with that kind of weapon is that when the other guys have it too, there is no “safe distance” from total disaster.