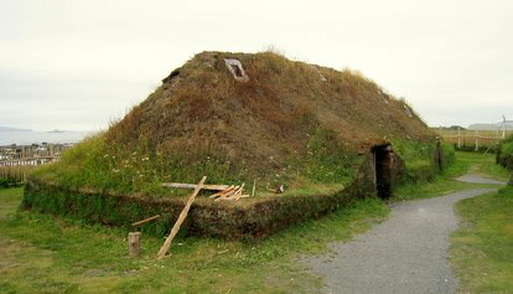 Viking Longhouse Newfoundland
Did the Vikings Sail The Great Lakes?

The confirmation in the 1960's that some mounds found near a fishing village in Newfoundland, Canada were the ruins of a failed Norse settlement dating back to about the Tenth Century changed North American history books forever.

The discovery confirmed that the Vikings discovered the New World an estimated 500 years before Columbus.

Archaeologists poured over the remains of the small community, dubbed L’Anse aux Meadows, and determined that it was Leif Erikson and his gang who arrived on the site in 998 and attempted to colonize a land they called “Vinland.”

It was believed that Erikson’s clan remained at the site for a short time . . . possibly up to ten years, before abandoning it. In addition to the problems related to settling a new land, the colony fell under constant attacks from local natives that the Norse called “Skraelings.”
​
While living for a short time in Northern Michigan, this writer found references to the possibility that Viking explorers may have traveled as far west as the Great Lakes, but historians debunked the stories as unproven mythology. Yet there were reports of copper crafted items from Michigan’s Keweenaw Peninsula found in ancient ruins in Europe, Egypt, South America and other parts of the world. This suggested that some kind of ancient trading was occurring. Did the Vikings touch the Keweenaw?

Then in 2014 the World News Daily, a hoax website, produced a story about a group of amateur archaeologists that found a cache of Norse artifacts along the coast of Lake Huron near Cheboygan, Michigan. Surprisingly, a lot of people bought the story as a real deal and the myths involving the Viking explorations sprang back to life.

If ever a bold enough group of explorers from Northern Europe ever existed, it had to be the Vikings. They indeed built ships large enough to traverse the Atlantic Ocean and proved it by leaving their footprints in Greenland, Iceland and Newfoundland.

If early explorers traversed the waters of the Great Lakes, arriving via the St. Lawrence River, it was not the Vikings. And if it happened it was long before Leif Erikson and his tribe landed in Newfoundland. Yet we have to admit that such an adventure was technically possible.

There is evidence in the ruins throughout North and South America that great civilizations once were here; that they built great cities and may even have flown aircraft over the land. And the distribution of things like Keweenaw copper artifacts and other objects unique to North America truly proves that some kind of trade routes existed that may have been international in scope. But there is no real proof that the Vikings went that far.

The ruins at L’Anse aux Meadows are found to be an authentic Norse community. Radiocarbon dating places the occupation of the site at between 990 and 1030 AD. There were three large building complexes and a smelting hearth. Two of the large buildings contained a longhouse and the third was a smaller hut. The sailors apparently slept together in the long halls and slaves lived in the hut.

It is believed from 80 to 100 people lived there. This suggests up to three ship’s crews.
​
One of the sod buildings has been reconstructed by Parks Canada as a “living history” museum.