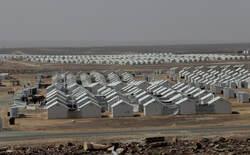 Stories have been appearing on various creditable and some questionable websites warning of the construction and hiring of staff to man what many identify as "FEMA camps" or containment areas designed to hold large numbers of people. These camps, according to reports, have either been constructed or are under construction in designated areas throughout the United States.

Is this true? And if so, what is the purpose? The image of Nazi concentration camps and similar camps constructed in the U.S. to contain Japanese citizens during the World War II come to mind as we examine the data outlined in these reports.

Perhaps the most discerning report by Alan P. Halbert, which in 2011 appeared on American Thinker, Political Forum, Western Journalism and various other sites, carefully documents government calls for bids for the construction and operation of what appears to be facilities designed to house large numbers of people.

Halbert writes: "In a nutshell, there seems to be a solicitation of bids occurring for the staffing of FEMA camps within 72 hours of implementation by an order from either Homeland Security or the president."
​
Halbert wrote that he found a document he described as a "Solicitation for Contract number HSFEHQ-10-R-0027, titled National Responder Support Camp" which called for the letting of bids on December 16, 2011. He said it was a 116-page document filled with the usual "canned and boilerplate requirements for doing business with Uncle Sam duly enshrined amongst the pages."

A Homeland Security website explains that the camps exist "to support FEMA’s mission to improve its ability to prepare for, protect against, respond to, recover from, and mitigate all hazards. RSCs are contractor-built and operated structures that are assembled (as requested) during emergencies and disasters to provide shelter, food, and other basic needs to emergency response personnel."

Halbert wrote that "the required size of the camps was fluid" ranging from a capacity of 301 to 2,000, including the staff. The camps are described as five acres for every 1,000 inhabitants. The minimum square footage required for each inhabitant is 63, "or approximately eight feet on each side. This is slightly less than current Federal Court requirements for housing prisoners which is approximately 72 square feet."

Somewhat disconcerting is this part of the Halbert report: The camps are surrounded by perimeter fencing or barricades six feet high, with all traffic in or out to be recorded on a daily log and with security restricting all traffic and access. Identification badges are a requirement for everyone, even the staff.

He wrote that these camps are placed to provide "services" to five areas of the United States, These are basically described as the Northeast, Southeast, Northern Midwest, Southern Midwest, and West.

The so-called services are unclear, according to the Halbert report. The contract document includes staffing requirements which state that when practical, "displaced citizens will be given the first opportunities for employment within the camp."

That the camps are surrounded by six foot high fences, with guards at the gates, and that the contracts call for the establishment of "off limits" zones and that staff must be "fully operational within 72 hours" of a call by the president or FEMA, adds a menacing touch to the whole picture. If they must be used, the camps appear to be there to house a lot of people in the event of a weather calamity, regional disaster, or even an attack by foreign powers.

Halbert concludes that the project description "appears to predict a calamity that will affect the entire nation simultaneously -- completely unlike a location-specific natural disaster.

A report by Barbara Hartwell that appeared on the Friends of Liberty website, stated that "there are over 800 prison camps in the United States, all fully operational and ready to receive prisoners. They are all staffed and even surrounded by full-time guards, but they are all empty. These camps are to be operated by FEMA should Martial Law need to be implemented."

Hartwell, who has been publicly attacked as a "disinformation agent," offers a long list of executive orders that originated under the Bush Administration. She describes in detail the exact location of all of the camps.

She said the project began under the name "Rex 84 Program," which she said was first designed to be used in the event of a mass exodus of illegal aliens from Mexico into the United States. She wrote that "Rex 84 allowed many military bases to be closed down and to be turned into prisons."

The initial program expanded to Operation Cable Splicer and Garden Plot, which Hartwell said where sub programs designed for population control. "Cable Splicer is the program for an orderly takeover of the state and local governments by the federal government. FEMA is the executive arm of the coming police state and thus will head up all operations," she wrote.

Her story noted that there are similar camps established in Canada, Puerto Rico and at Guantanamo Bay, Cuba.

A report by Kurt Nimmo and Alex Jones on Jones' Infowars site, dated December, 2011, gives even more details supporting Hartwell's report. This report noted that a bid by KBR, a subsidiary of Halliburton, was delivered "soon after the Senate overwhelmingly passed the National Defense Authorization Act which permits the military to detain and interrogate supposed domestic terror suspects."

The story points out that the act is in violation of the Fourth Amendment and Posse Comitatus Act.

Nimmo and Jones note that "Section 1031 of the NDAA bill declares the whole of the United States as a 'battlefield' and allows American citizens to be arrested on US soil and incarcerated in Guantanamo Bay."

They warn that "the government has patiently put into place the crucial elements of its police state grid and overarching plan for the internment of political enemies. We are quite literally one terror event away from the plan going live."

Is this story true? Various images of facilities identified as FEMA camps have been appearing on line but we also have found stories from creditable publications debunking the story. Among them was a story in Popular Science in 2009 that claimed it was all a massive hoax and that the pictures were images of North Korean prison camps.

We do know that the National Defense Authorization Act was passed and that its language appears to overstep the rules set by Congress in the Posse Comitatus Act that prohibits U. S. armed forces from being used against American citizens.

Since 9-11 our government has taken some drastic actions, including passage of the controversial Patriot Act that also violates Constitutional rights of citizens. Why should we not believe that FEMA is preparing camps of some kind, if not for only the care of large numbers of people in the event of major catastrophic events?
​
It may not be as sinister as some of the writers make it appear. But Mr. Sprat has raised a chilling concern in this, among the last of his long list of 57 issues.