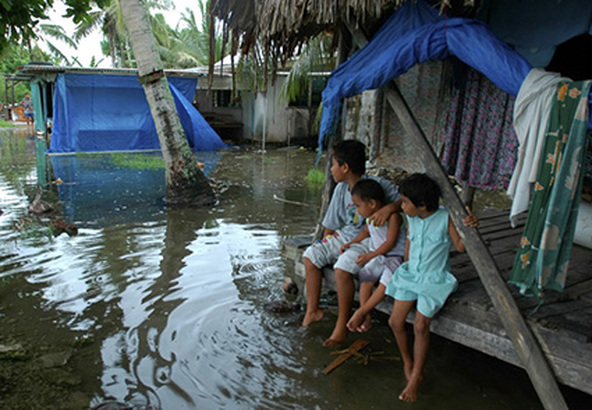 Five uninhabited and low-lying islands in the Solomon archipelago have been overwhelmed by rising sea levels as world ice caps continue to melt, researchers in Australia have found.

Six more islands in the chain have sustained flooding that has destroyed homes and forced natives to move to higher ground.

The Solomon Islands is a sovereign country consisting of six major islands and nearly a thousand smaller islands covering about 11,000 square miles. The archipelago lies east of New Guinea. The main island is Guadalcanal, the site of intense naval fighting during World War II. The islands host a small population of about 525,000 people.

Some believe the islands have been inhabited for 30,000 years.

The effects of rising sea levels on the islands were reported in the May issue of the online journal Environmental Research Letters.

The paper noted that the Australian researchers used aerial and satellite images of 33 islands, dating back to 1947, plus native knowledge and radiocarbon dating of trees to make their findings.

The most destructive flooding appears to have occurred on Nuatambu Island, where 25 families live. Rising sea levels claimed about half of the island’s inhabitable area and destroyed 11 homes, the study reported. Some of the Nuatambu natives relocated on a neighboring island.

The island of Nararo also has been severely flooded, forcing several families to move from that island as well.

At least five other inhabited islands have lost large area of land to the sea, the report said.
The Solomon Islands joined 177 nations in signing a global agreement to curb climate change during the world climate meeting in Paris in April.

A recent report in National Geographic noted that the emissions of heat-trapping gases from the burning of fossil fuels and other human and natural activities have caused the Earth's surface temperature to rise, and the oceans absorb about 80 percent of this extra heat. Consequently the warming of the planet is linked to the rising level of water in the oceans.

There are two factors involved. They are not only the melting of ice from the glaciers and poles, but a thermal expansion of water when it warms. When water heats up it occupies more space.

When big storms develop . . . which happens more because of our warming planet . . . the higher surface water means larger and more powerful storm surges that cause a lot of coastal damage. Unfortunately, coastal property has been attractive for home owners. It also is the selected site for nuclear power plants that require large amounts of water for cooling the uranium/plutonium used in generating electricity.

If our way of life isn't put in check soon, researchers warn that rising sea levels will soon force people to abandon their homes along the coast, force the evacuation of millions of flooded coastal cities and create a mass exodus to higher ground.
​
How high can we expect the water to rise? Estimates range from two to 23 feet within the next 50 to 60 years. Some studies suggest the melting is speeding up and it all may be coming down on us sooner than expected.