Our Godlike Productions soothsayer Jack Sprat lists tears in the earth among his list of concerns. Fractures in the ground often occur during earthquakes so they happen frequently and their origin is not a mystery in most cases. But sometimes they just appear, and when the crack occurs in a populated area, the results can be troublesome.

Something happened in Michigan on October 4, 2011, not far from where my late wife and I were living. A large crack stretching several hundred feet in length and about five feet deep appeared in the ground. That the event occurred in a rural area and far from major news outlets probably accounts for the fact that it gained little public attention.

The Michigan crack occurred on property occupied by Eileen Heider on Bay de Noc Road in Menominee County, near the Wisconsin State line not far from the Western shore of Lake Michigan.

Heider said she was sitting in a recliner watching television at about 8:30 a.m. when the recliner shook. "I thought a spring in the chair went," she said.

Neighbors reported hearing a boom, like a clap of thunder. There was no seismic activity in the area so an earthquake was ruled out.

The next day a friend stopped at the house and noticed something had changed. There was a 15-foot-high mound where the earth had been flat. The mound was separated by a 600-foot-long crack, five-feet deep and twisting through a wood lot. The trees along the crack that once stood vertical, were tipped about 30 degrees left and right away from the crack.

Authorities have not explained the crack. They say there was no record of an earthquake. There is no gas line running through the area so an underground explosion was ruled out. So what caused this strange upheaval?

A giant earth crack in the Aponte village in Nariño, Colombia in early 2015 has damaged local roads and houses and affected at least 210 families. The crack began as a small fissure, but then kept opening until it reached 3,937 feet in length, and about 13 feet deep. Locals say it is still growing. So far about 170 homes had to be evacuated. People say they can hear a strange sound like wind blowing deep in the crack.

On December 10, 2015, a massive crack along Route III in Paraguay opened and swallowed about 3.7 miles of the highway.

Another highway near Santa Clarita, California, was closed when the ground under it buckled and rose several feet. Parts of the road in a two-mile stretch are reportedly broken in a strange twisted formation. It happened on November 10, 2015.

Sometime in September, 2015 a giant crack opened up near Lysite in central Wyoming. Locals say it suddenly appeared and it has been getting longer and deeper ever since. At last examination it was at least 100 feet in length. Geologists theorize that the crack has been caused by moving water deep under the earth.

Back in June, 2005, in another isolated area hear Claude, Texas, another crack in the earth, even more dramatic than what happened in Michigan, also appeared in much the same way. There were no reports of an earthquake. The crack just appeared overnight.

The Texas crack was so massive it stretched hundreds of yards in length and one report said it measured from 30 to 50 feet deep. A nearby pond was completely drained of its water. Geologists tried to explain it by suggesting that the crack was caused by a shifting joint in the plates under the Earth’s surface. But that suggests an earthquake fault, and no quakes were recorded.

Some noted that the Claude crack, located in the Texas Panhandle near Amarillo, is not far from the Palo Duro Canyon State Park. That canyon is 120 miles long, about 20 miles wide and has a depth of more than 800 feet. It is believed to have been cut by water erosion from the Prairie Dog Town Fork of the Red River.

While moving water can be marked as the cause of the many strange cuts and canyons covering the dry lands of our planet, the cause of sudden appearances of the cracks in Michigan, Texas and other parts of the world has baffled the people who are trained to know and understand the things going on under our feet.

When the Puyehue volcano recently erupted at Santiago, Chile, a strange six-mile-long rift occurred just over two miles away. The tear was so massive they said it was three miles wide.

Long fractures have been recorded in the ground along California's infamous San Andreas fault when those plates move. The ground tore apart during the Great Alaska Earthquake of 1964.

Mr. Sprat is correct in his concern that cracks in the earth seem to be happening more and more often. Nobody knows just why many of them are happening.
​ 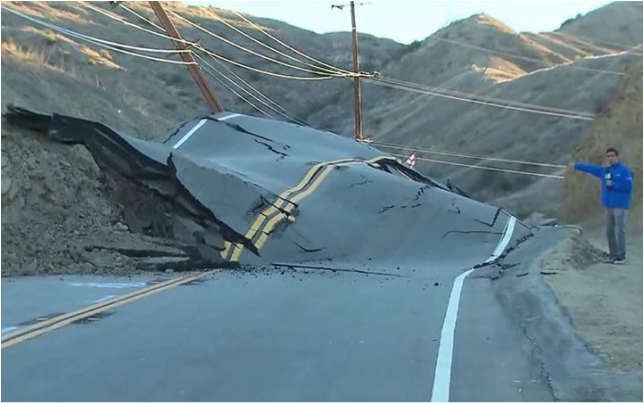