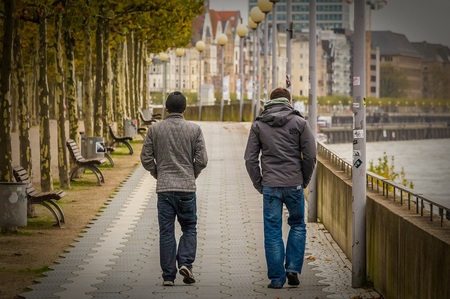 Turning The Other Cheek

In his Sermon on the Mount, Jesus told his followers: "But I say to you, that you resist not evil: but whoever shall smite you on your right cheek, turn to him the other also."
Jesus, among the great teachers that walked this planet, was attempting even in his day to redirect humanity away from the course of revenge, spitefulness and malevolence that was then and remains the norm. He taught the Old Testament command that we "Love thy neighbor as thyself."

Contemporary militants tend to scoff at the very thought of turning the other cheek. Many of us grew up admiring the Hollywood manufactured heroes who always clobbered the bad guys by fist or gun. Nations defend themselves by military force. The very thought of turning to total nonresistance such as Jesus taught tends to make anyone who tries it marked as a "sissy." It has been socially unacceptable not to respond to a challenge with equal if not excessive force.

Defenders of the militant response are usually quick to quote from the old law of the books of the Hebrew Torah that call for "an eye for an eye" to justify their quest for vengeance. But Jesus made it clear that he was setting new rules for living and clarifying the Old Testament verse when he began his lesson with the words: "You have heard it said . . ." That old Testament verse called for judgment against those who rob or damage another person or property. It is not a call for taking revenge.

It is odd to fathom that a powerful religion grew out of the teachings of Jesus, and that this religion, which now has a powerful influence on the leadership in Washington D.C., has failed to have an influence. The United States flaunts its military power. The nation is quick to take up arms and send its best young men and women off to war on distant lands, and within recent years without just cause.

The more devout these Christian believers claim to be the more likely they are to respond to any kind of affront with violence. It is obvious these people are not true students of the teachings of Jesus. If they would just study the passages that quote Jesus’ Sermon on the Mount, and attempt to apply these ideas in their lives, it could have a powerful impact on the world.

India’s great leader Mahatma Gandhi led his nation to independence from the iron hand of British rule by peaceful resistance. Gandhi never lifted a finger to battle his political and social enemies. He taught peaceful restraint and went on long hunger fasts to make his points.

Gandhi once said: "You must be the change you want to see in the world."

He also said: "When I despair, I remember that all through history the ways of truth and love have always won. There have been tyrants, and murderers, and for a time they can seem invincible, but in the end they always fall."

Notice that the Occupy Movement protesters are trying hard to follow the route set by such leaders as Gandhi, Nelson Mandela and Martin Luther King. These great leaders used peaceful demonstration to help win important civil rights legislation for minorities in their countries. Occupy Wall Street and all of the Occupy Movements that have followed are attempting to assemble for peaceful protest against social injustice.

Since the Occupy Movement hasn't been getting big media attention many people think it failed. But it has not gone away. Instead it has splintered and regrown into a variety of focused causes that are occurring all around the world. A major example is happening now on the streets of Paris, France. Fast food workers in the United States have been demonstrating for better pay and successfully leading the cause for a $15 per hour minimum wage.

Other causes have been a resolution to the student debt crisis, anti-fracking, green energy, the Keystone pipeline and legislative reform are only a few of the causes.

The media, however, has been quick to report violence at many of the assemblies. The violence is almost always caused by lines of black-booted police officers in riot gear that try to remove the demonstrators by force.

There are times when the power forces secretly pulling the strings of the Washington puppets seem not only difficult to identify, but impossible to overcome. We feel helpless as we watch the steady dismantling of the Constitution and the balance of wealth in our nation. Some have called for a new American revolution. But this is not a time for protesters to take up arms or march on Washington armed with pitchforks and muskets. The way to win is to follow the pathways shown by Jesus, Gandhi, Mandela and King.

It is comforting to see that the youth of this and other major industrial nations appear to have set a proper course. They have zeroed in on some key issues and are using the power of peaceful assembly to bring about change.
​
In in all situations, we must never forget to love one another, no matter what is happening to us. Sometimes an act of kindness . . . no matter how small . . . carries amazing power.