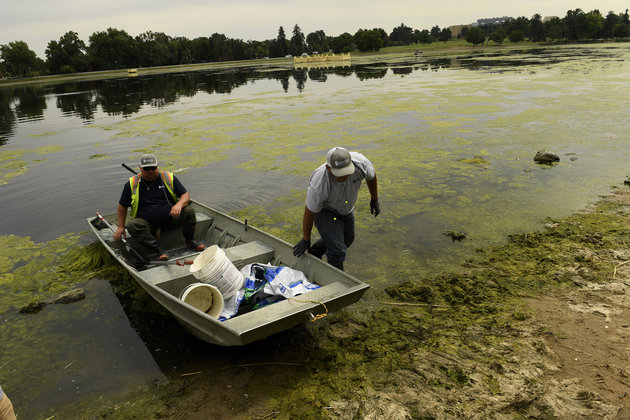 The weather change phenomenon is producing hotter than normal summer days. The heat is driving people to their favorite cooling-off spots; local beaches, lakes and swimming holes. Ironically the warming climate is contributing to a build-up of toxins that are forcing health officials to close those swimming spots.

Florida’s Atlantic coast is being invaded by a thick, blue-green and smelly algae bloom that has prompted the shut-down of beaches in St. Lucie, Martin, Palm Beach and Lee Counties. Health officials say people who have dared to enter the water are complaining of various health problems ranging from sore throats to runny noses and red eyes. There also has been a record number of cases of Legionnaires’ disease also linked to toxic waters.

The source of the severe coastal bloom has been traced to Lake Okeechobee, where local industries have dumped chemicals, fertilizers and cattle manure, making the lake a virtual “toilet.” This water runs into the ocean via the St. Lucie River which empties in Martin County.

On Florida’s western coast and all along the Gulf of Mexico the waters are still highly toxic as a result of the 2010 Deepwater Horizon disaster and yet another major oil spill from a defective pipeline owned by Royal Dutch Shell earlier this year. Sea creatures are still floating dead on the coast.

Agricultural nitrogen runoff from farmland throughout the mid-section of the nation is finding its way down the Mississippi River and into the Gulf of Mexico. The result is toxic algal blooms along the coast and a giant “dead zone” just off the mouth of the river.
​
The  Texas Health Department has found a large number of vibrio infections that were contracted from bacteria in the warm coastal waters. Two swimmers were infected earlier this year by flesh-eating bacteria after daring to swim in that soup.

Algae blooms also are found now throughout the Great Lakes and especially in the shallow waters of Lake Erie, where industrial and agricultural waste has been freely dumped for years. Lakes Michigan and Huron are so toxic from years of industrial and agricultural run-offs that the beaches are frequently closed when test samples show the water is too dangerous for swimming.

In California the Pacific coastal waters have become so polluted swimmers are constantly being warned, especially after a rain. Health officials warn against swimming or surfing in the ocean within 72 hours after a rain. They said the water becomes especially polluted then from urban runoff. Found in the water are high concentrations of bacteria, pesticides, herbicides, fertilizers, heavy metals and petroleum products.

Californians are especially warned against ever swimming within 400 yards of a flowing storm drain. And in Southern California, they say it is difficult to find a stretch of surf that is not near a storm drain.

California swimmers are at high risk of contracting a wide variety of diseases ranging from pink eye to hepatitis, gastroenteritis, amoebic dysentery, salmonellosis and shigellosis.

The bottom line is that during the hot days of summer it is now safer to remain home and sweat it out than trying to cool off with a swim at the local beach.  Artificial swimming pools may be all right if they are heavily chlorinated. You can expect to share these pools with crowds of folks; some of whom may not be very concerned about personal hygiene.
​