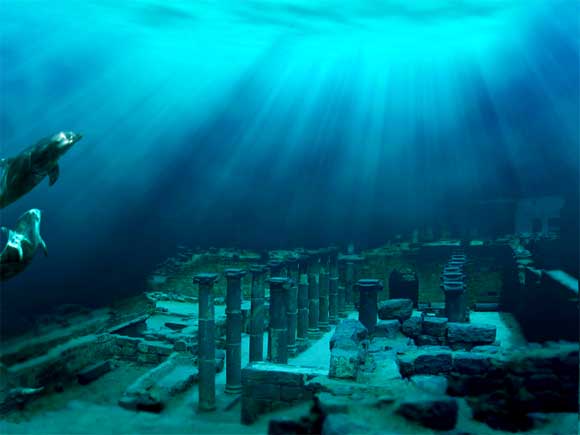 Legend has existed in India for centuries that there once existed seven holy cities along the shores of the Bay of Bengal, off the coast of what is now Mahabalipuram, India. These great cities, part of a great civilization that existed long before the ancient Harappan Civilization existed, were said to have been destroyed in a great war and the ruins later buried in flood waters.

The names of the seven cities were Ayodhya, Mathura, Haridwar, Benares, Kenchi, Ujjain and Dwaraka.

The myths of Mahabalipuram were recorded by J. Goldingham, an Englishman who visited the area in 1798. As the story was told the place was known to the fishermen as the Seven Pagodas. Only one of the ancient temples still could be seen. It stood on the seashore. The other six were said to be submerged under the sea.

Sparked by British author Graham Hancock, who believed the stories may lead to new archaeological discoveries, a joint team of 25 divers representing England’s Scientific Exploration Society and India’s National Institute of Oceanography, recently searched the area and discovered that the stories appeared to be true.

The team found ruins of a great city about 70 feet under water and covering several square miles. While it was only a discovery dive, and years of underwater archaeology lie ahead, there is speculation that this may be only one of the seven cities. The suggestion is strong that it may even be the lost city of Dwarka, the once fabulous "Lost City of Gold" where the prophet Lord Krishna once walked.

There is disagreement over just how old this city is. Some place the age of the ruins at 1500 BC. Others suggest it dates to over 21,000 years ago, at a time preceding the last great ice age. The melting ice from that period may have had a lot to do with the fact that Dwarka is one of an estimated 300 known cities that have been found under the seas of the world.

How advanced was that civilization? There exists an ancient Indian epic known as The Mahabharata that describes a war between the Vrishnis, of the Rama Empire, and the Salva, invaders from an unknown place. In the story the Salva flew through the sky in chariots that emerged from a flying city known as the Saubha.

Krishna lead the Vrishnis in the battle against the Salva. They used "swift-striking shafts" that shot the flying Salva craft out of the skies. The war ends when a great explosion destroys three cities of the Vrishnis and their neighbors, the Andhakas, killing everyone and leaving no building standing.

The story sounds like the kind of war that the world might experience today. Flying aircraft, missiles shot from the ground that brought down the aircraft, and lastly, the use of nuclear weapons.

Were the seven holy cities part of the ancient Rama Empire? Were they destroyed in the war? The answers to these questions may never be known.

Since the ruins were discovered about 40 years ago, archaeologists and Indian Navy divers have been examing the site. They have collected blocks and artifacts and using carbon dating to determine just how old the city is and if the myths about Dwarka are true.
The samples found include wood pieces, pottery materials, hearth parts and animal bones. These things were sent to Manipur University, Oxford University, the Institute of Earth Sciences in Hanover, Germany for analysis and dating.
​
So far the dating process has found that some of the material dates back as far as 32,000 years. Thus the ruins of Dwarka are clearly the remains of one of the oldest civilizations known to modern man.