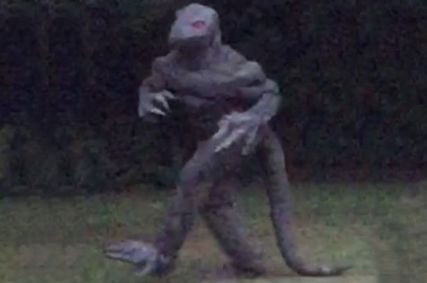 When Dixie Rawson of Bishopville, South Carolina, recently found large bite marks that tore away portions of the metal grill of her van, and neighbors found dead cows that had been ravaged by some creature in a nearby field, folks immediately thought about a 30-year-old legend of the Lizard Man.

The creature made its first appearance on June 29, 1988, when Christopher Davis, then 17, blew a tire on a road that ran along the Scape Ore Swamp while driving home from work at around 2 a.m. He told police a large beast, an estimated seven feet tall with green rough skin, red glowing eyes and hands with three big figures and long black nails, coming up out of the swamp.

Davis said he jumped into his car as the creature bounded for him. It jumped on the roof of his car as he was driving off, wildly swerving the vehicle to shake it off the car. He said his last glimpse was a flash of green in his mirror when he looked back.

According to the old story, Davis’s father found scratches around the door handle of the car, the side-view mirror badly twisted and some deep scratches and marks on the top of the vehicle where the beast had been.

The local newspapers quickly dubbed it the “Lizard Man,” and after the first report, various other people said they witnessed similar sightings that summer in and around the swamp as well as nearby Bishopville. Police said they were receiving so many calls they had to establish a special “Lizard Man” hotline.

About two weeks after the Davis incident Sheriff’s deputies made plaster casts of what appeared to be large three-toed footprints. The prints measured about 14 inches in length. Biologists at an FBI lab said the prints were “unclassified.”

After that, the reports subsided and stopped completely until October, 2005, when a woman at Newberry, South Carolina, reported two Lizard Man type creatures outside her home.

None of the old stories were ever substantiated by police and the creature was never caught or photographed.

Now the legend has been rekindled by an unexplained assault on Dixie Rawson’s van. In a letter Rawson sent to the local television news she wrote that “the whole front half of our van is chewed up. There are bite marks right through the front grill. Both sides of the van above the wheel wells were bitten and the metal is bent like a piece of paper.”

Also Sarah Berra of Sumter, South Carolina, not only saw this strange humanoid reptilian cryptid, she managed to snap some pictures before it disappeared among some trees. She told authorities she had just stepped out of a church building when she spotted the creature moving among some trees in the distance.

“My hand to God, I am not making this up,” Berra told local news reporters.

The strangeness in this story is that something extraordinary appears to be occurring in and around the Scape Ore Swamp in South Carolina. That Christopher Davis was frightened out of his wits by a seven-foot-high creature with a scaly green skin might have been somebody dressed in a scary costume, but how do we explain the beast’s amazing ability to jump to the roof of the car, and almost rip off the side mirror?

Even harder to explain are the teeth marks in Rawson’s metal grill and wheel mounts. What could have done such damage to her car and leave this kind of marking in the metal?

And what is that creature in the Berra photographs?