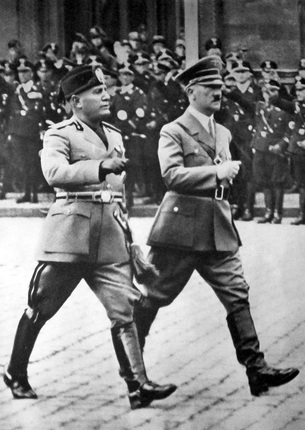 How Mussolini Was Dragged Into Alliance With Hitler

Even though he rose to power in Italy, the nation surrounding the Roman Catholic Vatican and the seat of Jesuit power, and he was raised in a Catholic household, Mussolini never declared himself a member of the church. Also, Mussolini and Hitler were not political allies until they found themselves caught up in the same war and the Italians found they were reliant on Germany for military support.

Mussolini had an agenda of his own and it did not include involvement in a world war on the side of the Axis powers. Because he was strongman and a fascist leader Mussolini just seemed to fall in bed with Hitler, the leader of an even more spectacular fascist government evolving in Germany.

And even though the Jesuits were pulling political strings and dragging the world into war in the late 1930’s, Mussolini did not connect right away with the Jesuits. What he did do, however, was sign an alliance with the Vatican, naming Vatican City a government within the Italian government. He was smart enough to know who was allowing him to rise to power and stay there . . . at least for the duration of the war.

Born of common stock, Mussolini was a troubled youth. He was banned from his local church for throwing stones at the congregation after Mass. When he was eleven he was expelled from boarding school after stabbing another student.

In the meantime, Mussolini was strongly influenced by the anti-Christian ideas of Friedrich Nietzsche who questioned the existence of God. He also rebelled against the Socialists and was kicked out of his membership. It was not long before Mussolini was following the ideas of Georges Sorel who advocated violence, direct action and general strike to overthrow liberal democracy and capitalism. In other words, he evolved into a Fascist.

He did well in the Great War and rose to the rank of Corporal. Mussolini emerged from the war with a plan to rule Italy and re-create the Roman Empire. Through his writing and political actions he forged a paramilitary Fascist movement, marched on Rome with the baking of the military and the Vatican, and emerged as the nation's prime minister. By 1923 he was dictator of Italy, which was strange because Italy, like England, also had a seated king.

King Victor Emmanuel III was on the throne of Italy from 1900 to 1946. He apparently ruled in title only because Mussolini seized political power and held it until 1943 when the king forced him out. Strangely, even though Italy lost the war, King Emmanuel remained in power until stepping down in 1946 and giving the kingdom to his son, Umberto II. The monarchy ended that same year after a constitutional referendum was held.

It was in 1929 that a concordat between Mussolini, King Emmanuel and the Vatican was signed that resolved a long struggle between the Italian state and the Papacy. The Lateran treaties recognized Vatican City as a separate nation within the heart of Italy. The agreement also declared that the Italian government would protect the honor and dignity of the Pope by arresting and prosecuting anyone that challenged the Vatican.

The agreement also declared Catholicism to be the official religion of Italy and permitted the Vatican to maintain its own banking system.

Even though Mussolini was privately a non-practicing Catholic, he allowed himself to be re-baptized by a priest. The ruse worked and many Catholics agreed to support his anti-Communist doctrines.

Mussolini's military conquered Ethiopia, subdued Libya and Somalia, seized Albania and helped the Nationalists win the Spanish Civil War. By 1939, as Hitler's Nazi forces were poised to start warfare at Germany's borders, Italy's military was seen as a predominant force in the Mediterranean region.

Thus we had two Fascist powers with armies poised for war, but Hitler and Mussolini were not necessarily working together. Knowing his army was weary from warfare and unprepared for more war, Mussolini made what became a fatal mistake. He allied himself with Hitler expecting the German military to prop up his leadership during World War II.

After Hitler took Austria and invaded Poland, Mussolini agreed to join the Fascist-Nazi forces and thus Italy joined the Axis powers. Mussolini was gambling for his own Mediterranean-African empire through war with the west. His long range goal was to abolish the monarchy and create a totalitarian state.

What he did not expect was the Intervention by the United States and decision by Allied troops to strike the Axis forces at their weakest point. They hit Italian and German forces in Africa and along the Mediterranean coast.

After the Allied victories in 1942, Mussolini asked Hitler to make peace with Stalin and turn his forces against British and American forces. But Hitler continued his campaign against Russia and Italian forces found themselves divided in political ideology.

King Emmanuel's decision to oust Mussolini from power in 1943 provoked a civil war in Italy that strangely raged in the midst of World War II. Consequently, there is a lot of historical confusion as to who was fighting who on the Italian front in that period.

The northern part of Italy was occupied by an estimated 600,000 German soldiers while the southern half of Italy, governed by the monarchy, now was fighting for the Allied cause. Hitler "rescued" Mussolini and put him in charge of the northern Italian forces. When the Germans surrendered in Italy in 1945, Mussolini attempted to flee with his mistress, Clara Petacci, to Switzerland. They were captured at the Swiss border, lined up against a wall and shot.