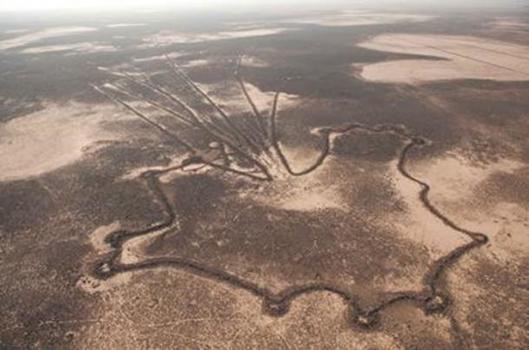 A newly discovered collection of ancient ground markings, or geoglyphs, has been discovered in Kazakhstan in Central Asia by researchers studying high-resolution imagery by Google Earth.

A geoglyph is a large artistic image or design created on the ground by using earthworks, stones, gravel or even trees. The mystery of these images is that they usually go unnoticed by people on the ground and they can only be observed from the air.

Until now the Nazca Lines of Peru have remained among the best known geoglyphs. Old records indicate that large “garden beds,” or artistic earthen designs in the shape of squares, triangles and rectangles were known to exist in the North Central portions of the United States before modern agriculture destroyed them.

The geoglyphs of Kazakhstan are unique in that they appear in a variety of different shapes that include squares, lines, crosses and rings. The ancient symbol of the swastika also is found. Researchers say there are over 260 different geoglyphs in the Asian display, some of them measuring from 295 feet to 1,312 feet in diameter.

The patterns were discovered in 2007 in the Turgai region by Dmitriy Dey, a Kazakh economist, while he was closely examining Google Earth maps. Since then researchers from Kostanay and Vilinus Universities have been doing extensive studies of the geometric shapes using aerial photography, ground-penetrating radar and archaeological excavations.

The great mystery within these strange earthworks, which have turned up on three known continents, is that they are so large they cover many acres of the natural landscape and no one knows who made them or why. They obviously took a lot of physical labor to create since they involved the digging of trenches and piling of earth, small stones and other earthen articles, they form carefully designed images and intricate patterns, but can only be seen and appreciated from the air.

Archaeologists at the Kazakhstan site have discovered the remains of hearths and possible buildings that suggest some kind of ritual may have occurred there. Carbon and other dating methods used by researchers indicate that the earthworks at Kazakhstan could be up to 8,000 years old.

An article in the New York Times noted that one specific site in the form of a square consists of 101 raised mounds and a diagonal cross connecting opposite corners. Another configuration that has been photographed from space has been named “Ushtogaysky Square, after the name of a nearby village.

That such earthen artworks were once created by ancient peoples strongly suggests that ancient civilizations once had the capability of flight, or they were visited by alien cultures that dropped down out of the sky. These things were obviously built to appease someone or something that was capable of observing them from high above the ground.