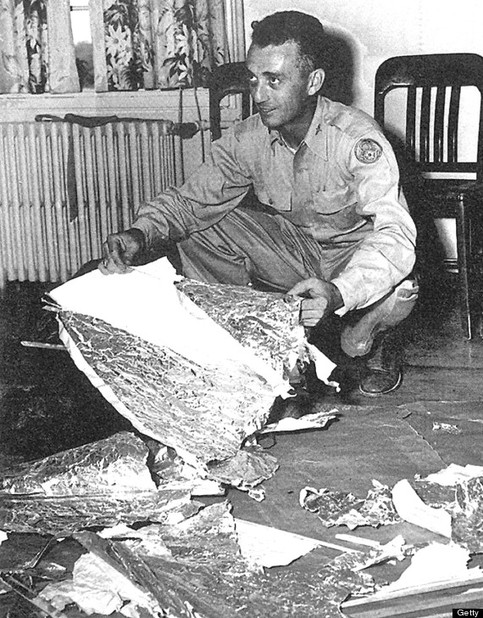 Concerning The Roswell Incident Of 1947

Much has been written and said about the alleged crash of an alien craft in the wilds near Roswell, New Mexico, in 1947. That strange incident that stirred a news report that suddenly got reversed from the discovery of remains of a crashed and burned ship to parts of a fallen weather balloon, has remained the fodder for one of the nation’s most persistent conspiracy theories.

As the story was told there was a severe thunderstorm moving over that remote area of New Mexico on the night of July 2, 1947. On the following day, William “Mac” Brazel, foreman of the J. B. Foster Ranch near Corona and a seven-year-old neighbor boy, Dee Proctor, discovered the remains of something that had crashed, strewing pieces of wreckage over a large area and on a path stretching for more than a half a mile.

They picked up some of the pieces, which they described as unlike anything they had ever seen and assembled them in a box. When Brazel drove Proctor home, they showed a piece of the wreckage to the boy’s parents, Floyd and Loretta Proctor. They all marveled at what they were looking at. Included in the box were odd pieces of foil that could not be cut, burned or wrinkled, and thin “I”-beams on which were printed strange symbols like foreign writing.

The general opinion among the Proctors, Brazel and the people at the Foster Ranch was that they had parts from an experimental aircraft by the military, perhaps from the nearby Roswell Army Air Base. Brazel decided to show what he had found to the local sheriff.
On July 7, Brazel drove into Roswell with his box and showed what he had to Sheriff George Wilcox. Wilcox was as baffled as everybody else about what they were looking at. He called the Roswell Air Base and talked to Intelligence Officer Jesse Marcel. Marcell and Counter-Intelligence Corps Officer Sheridan Cavitt drove to the ranch that night and slept in Brazel’s bunk house. In the morning Brazel took the two officers out to the sight of the debris.

It was Marcel who said that what they were looking at appeared to be the remains of a crashed alien ship, or UFO. He said that the military was offering a reward for just such a discovery. The officers filled another box with their own collection of odd pieces and left. Brazel was promised that he would receive the reward of it turned out this was proven to be a “flying saucer.”

Within hours the military had moved on the ranch. Troops literally combed the ground on the morning of July 8 looking for every piece of the wreckage. At around noon that same day, Colonel Blanchard at Roswell ordered Second Lt. Walter Haut, the base public information officer, to issue a press release announcing the discovery of a crashed UFO.
Haut delivered the press release to Roswell Radio KGFL. Station owner Frank Joyce waited for Haut to return to the base, then called him to confirm the story, then posted it via Western Union to United Press. Before the day was out, the story was making headlines all across the country.

As the story is told, Brazel was immediately invited to the radio station for a personal interview. As he was leaving the station, military police officers were waiting for him. It is said Brazel was taken into custody, the radio station story was confiscated, and a strict order of secrecy was placed on this story. But they were too late, the news release was already out and newspapers and radio stations from the Midwest to the West, including the Chicago Daily News, the Los Angeles Herald Express, the San Francisco Examiner and the Roswell Daily Record were spreading the story.

In the meantime, Marcel and Cavitt returned to the Roswell base with carloads of wreckage collected at the scene. Marcell accompanied it on a special flight to Fort Worth Army Air Force Base. Even as he was in flight, General Clemence McMullen in Washington called Colonel Thomas DuBase in Fort Worth, issuing orders to quash the flying saucer story and create a cover story. He also ordered some of the crash material sent immediately to Washington.

Thus that same afternoon, General Roger Ramey, Eighth Air Force Commander at Fort Worth, held a press conference and announced that what had crashed was a weather balloon. He had his picture taken with the remains of a damaged weather balloon and said it was part of the wreckage from the crash site.

Brazel was held for an undisclosed period of time. When he was released, his story was changed. He told friends that all he found was a weather balloon. He rarely spoke of the affair after that.

It was after the Roswell incident that writer Donald Keyhoe, a former Marine Corps pilot and writer, published a best-selling book The Flying Saucers Are Real, in which he argued that the Air force knew UFOs were extraterrestrial but was covering the truth to avoid public panic. Keyhoe documented a collection of first-hand accounts of UFO sightings by experienced pilots, police and other people who would appear to have given creditable reports of what they saw.

Keyhoe noted that the observations of unexplained flying objects had been occurring for hundreds of years, but increased after 1945, when the United States developed and exploded the first atomic bomb.

Was it a government cover-up? Based on what is known, this conspiracy theory is easy to believe.