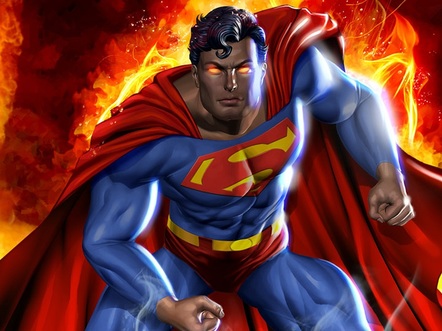 Is There A Superman?

When I was a child, reading ten-cent comic books about such amazing super heroes as Superman, Batman, The Green Hornet and Tarzan was a popular pass-time. Every kid had his stack of favorites.

The theater in our town offered Saturday afternoon matinee films for the children. For no more than a quarter, and maybe another dime for a box of popcorn, we got to see black and white films featuring western heroes like Roy Rogers, Tom Mix, Gene Autry, Audie Murphy and The Lone Ranger. You knew these men were good and pure because they always wore white hats. They went through great tribulations because evil corrupt men, wearing black hats, always seemed to be hanging around. In the end, however, the good guys won and justice prevailed.

On Sundays we went to church where we heard stories about one of the greatest super heroes of them all. He was Jesus, the man who threw the money changers out of the temple, led a band of rebels through the countryside, defied Jewish authority and eventually got arrested and crucified. But that wasn't the end of Jesus. He broke all the rules, rose from the dead, organized his gang to keep the work going, and then ascended off into heaven at a time of his own choosing. Before he left he promised to someday come back and save the world after we monkeyed it up again. A lot of people are still waiting to see if he really meant it, and if he does return, how he is going to fix the mess me have made of the planet now?.

Of course when we were tots, we also were told (and even believed for a while) the myth about a red coated fat man who drove a sleigh pulled by magical reindeer and visited our house every Christmas Eve to bring toys in a bag. That a fat man and all those toys in one bag could fit through a small hole in our chimney, and escape without getting seriously burned by the coal fire at the bottom, was never doubted. After all, our lives were filled with stories about super heroes. Why couldn't Santa Claus be just as amazing as all the others?

Since the advent of television, the children haven't lost their exposure to super heroes. They are more numerous now than ever. It is rare now to see a kid with a comic book, and the old western cowboy hero seems to be a thing of the past. But children are bombarded with cartoon and film images of amazing characters. Today's television "supermen" not only can fly through the air and stop speeding trains, but can turn themselves into animals and machines that do things that defy all of the rules of physics and human logic. They even make the Jesus story a bit lame. We have developed imaging skills in our film studios that are so life-like, we can make it appear as if real live people do these things.

And, of course, the Santa Claus myth continues to live on. If anything the stories surrounding Christmas are more fantastic than ever. They now include a red-nosed reindeer, a talking snowman, elves that make toys, and even a "Grinch," an evil troll-like character who would like to destroy the merriment of the season. Every year I find myself rooting for the Grinch.

The creation of super heroes in native mythology is not new. I suspect it has been going on as long as humans have been capable of living collectively and communicating with one another.

Greek mythology, for example, is filled with superhuman characters, or "gods" who come down to Earth and deal with mortals. Such characters as Hercules, Zeus, and Eros, and their female counterparts, Aphrodite and Dionne, remain among the best known of a long string of Greek super heroes.

The Hebrews had their stories too. The Old Testament Book of Genesis tells about "the sons of God" having children with mortal women and creating children who were "mighty men of old, men of renown." Then there was Joshua, who led the Israelite army on a military campaign that was so amazing his methods are still studied by modern fighting men. Another Hebrew hero, David, slew a giant with a slingshot. Shadrach, Meshach and Abednego, were thrown into a fiery furnace for their faith and walked away unscathed.

Whether myth or based on fact, the stories seem to be a deep-rooted part of all human cultures. We seem to want to deny the possibility that we are mortals who, at best, can expect to experience only a fleeting moment in history. Could it be that the creation of myths about super humans is an attempt to portray ourselves as something more than we are? Or something we collectively know we are supposed to be?

Suppose there is a human awareness, at least on the subconscious level, that we are, indeed, all supermen and women. Is it possible that we are really immortal beings living in temporary bodies during our brief stay in this place. Perhaps we have forgotten our purpose, which was to grow both spiritually and mentally and actually become the immortal, god-like beings we are capable of being.

In spite of resistance by world religious leaders (who claim that man should not play god) scientists are marching ahead with human genetic exploration that may someday lead not only to the creation of healthy, genetically perfect children, but find a way to stop the aging process. The human genome project, plus the stem cell experimentation in fixing the aging, decaying bodies we now endure, may even make it possible for many people living today to enjoy much longer, more productive lives than anyone ever expected. Some optimists believe it may someday be possible for humans to live as long as they wish in this three dimensional world, and choose their own time to leave it.

It is ironic that at the very time these miraculous discoveries are being made, the human masses have made such a mess of this planet that its environment is turning hostile. We have overpopulated, exploited and polluted our world to a point where it is falling to ruin. We are living on a dying planet. Even if we do find a way to achieve immortality, we have destroyed the garden. We will soon have no place to live.

How can Jesus or any other superman who might come along repair the terrible mess we have created for ourselves?

There still is a chance. It is linked to a lot of "ifs," however.

--IF we can bring ourselves to understand that the only real "superman" lies within ourselves.

--IF we are to be saved, we must save ourselves. No alien ship and no Jesusmobile is going to drop out of the sky at the last moment and carry us off to safety. We either find a way to live on this hostile planet in its new and deteriorating condition, or perish.

--IF we can wake up enough people in the world to realize the seriousness of our dilemma, we must collectively generate a desire to win this war. And believe me, there is a spiritual war being fought against forces that seem to want the human experiment to fail.

--IF we can succeed in keeping the righteous do-gooders from blocking the research, the science of computerized robotic technology, linked to the human brain, is rushing forward. Virtual reality devices were but the first step in linking our thought patterns with computers. I recently saw a news story about a man who discovered a way to put a computer chip in his brain that allows him to open and close doors in his house, and turn switches on and off by mere thought.

--IF this technology can proceed quickly enough, and IF we can somehow slow down the environmental destruction of our planet to buy us more time, it may be possible for humans to shed this mortal skin and transfer ourselves into new bodies capable of enduring the hostile environment that awaits us. The thought is that if we move into silicone-based bodies we will not be affected by the intense temperature changes and extreme bombardment of the sun's radiation once the Earth's protective ozone layer is completely destroyed.

--IF we can do this, the human experiment on this planet may have a chance to succeed after all.

From all indications, this is our fourth and final try. If we fail this time around, there may not be another chance.