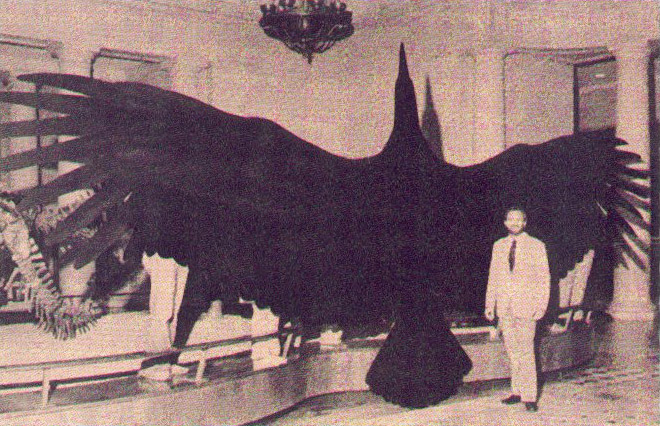 Many Native American tribes throughout the United States, and perhaps aboriginal people around the world, share a cross-cultural story about a giant bird that rises over the land either during times of great trouble, or to cause great trouble, and in some cases to bring thunder and rain to make the crops grow.

This creature is generally known to the American tribes as the Thunderbird. Ancient cultures in Europe, including the Greeks, called it the Phoenix. Similar mythology exists throughout Africa, Asia and Europe.

The Cherokee myth has it that these massive birds return every 27 years to steal away children. Most other tribes perceive the appearance of this mighty bird, with a wing span estimated at 16 to 20 feet, as a powerful spirit that flashed lightning from its eyes, caused thunder by the flapping of its great wings, and brought the rain that watered the earth.
​
This was and may still remain an important figure within cultural mythology. The image of the thunderbird appears on totem carvings, in masks used in native dances and is found in rock art throughout the Americas. The Lakota refer to this bird as Wakinyan, which means winged and sacred. The Kwakiutl call it Jojo. The Ojibwa word is animikii.

In the myth, the bird's wings are two canoe-lengths from wingtip to wingtip. It creates storms as it flies because its wing beats pull the clouds together. Thunder is the sound of the bird's wings clapping, and sheet lightning is the light that flashes from its eyes. Lightning bolts are glowing snakes it drops from its talons.
​
Because this is a cross-cultural story, and is shared by aboriginal people around the world, anthropologists have been puzzled as to its origin. While no flying birds of that size are known to exist today, cryptozoologists theorize that the story may be based on recollections of a prehistoric creature that existed more recently than generally believed.

Ruling out the pterodactyl , which existed among the dinosaurs too long in the past, scientists speculate that what the tribes are remembering is a prehistoric vulture-like bird, the Teratornis, which had a wingspan of about 16 feet and may have been encountered by early natives in the Americas.

Yet strange stories persist, not only among contemporary tribes, but in the American media, that keep the stories of the thunderbird alive.

Among the best known is a tale about two Arizona cowboys who in 1890 killed a giant birdlike creature said to have had a massive wingspan. The creature was described as having a smooth skin with featherless wings somewhat like a bat. Its face looked like that of an alligator. Some believe it was a pterodactyl still roaming the earth from the time of the dinosaurs. Some say the old Tombstone Epitaph newspaper published a picture of this creature, although such an image has never been produced.

In the 1960s and again in the 1970s, various newspapers in Washington, Utah and Idaho published stories of sightings of super-sized birds flying overhead that were as large as a small private aircraft. And the newspaper in Lawndale, Illinois, reported in July, 1977, that two large birds swooped down on three small boys at play and actually lifted one of the children a few feet off the ground before dropping him.

Another person who reportedly saw and even photographed those birds was Chief A. J. Huffer, a member of the Cherokee Nation, who was on Lake Shelbyville, Illinois, on that date and shot moving pictures of two massive black birds sitting in a tree. People who have examined the film say the birds had wing spans estimated at 10 feet and 14 feet, respectively.
​
Some people who have studied the film and read the reports have suggested that the birds were either Andean or California condors that were far from home. The Andean condor is a large black bird that has a wingspan in flight of about 10 feet. These birds are believed to be powerful enough to actually pick up a human baby, although there is no record of this ever happening.