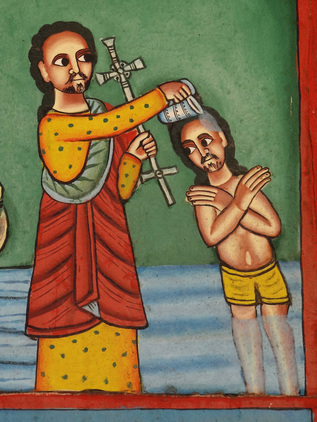 Why Was Jesus Baptized?

The eleventh chapter of the Book of Matthew tells of the ministry of John the Baptist who Bible scholars say was prophesied in the Book of Isaiah as the messenger announcing Jesus as a "savior." Some even believe John and Jesus may have been distant cousins.

John was a strange character. He wandered around in clothes of camel's hair and ate locusts and wild honey. He proclaimed baptism of repentance to achieve God's forgiveness of sin, and roamed the countryside, gaining a following of people who accepted water baptism in the local streams.

He is quoted as saying in Matthew 3:11: “I indeed baptize you with water unto repentance: but he that cometh after me is mightier than I, whose shoes I am not worthy to bear: he shall baptize you with the Holy Ghost, and with fire.”
​
So then in the next verses Jesus shows up and asks John to baptize him before he starts his own personal ministry.

According to the Bible account, John dunks Jesus in the Jordan River. As he emerges from the water "the heavens open" and the Holy Spirit drops down upon Jesus. A voice from heaven then announces: ​"You are my Son, the Beloved; with you I am well pleased."

There are some interesting problems with this story. As the Christian story is told, Jesus was born sinless, of a virgin, and held a status as the "Son of God" or a part of the Holy Trinity. Baptism was an old ritual practiced by the Jews and even the Greeks as a symbol of purification. John the Baptist used baptism as a primary sacrament in his messianic movement. Some scholars believe Jesus may have been among John's followers before launching his own ministry.

But if Jesus was born without sin, why did he need to be baptized? The very act was a ritual used to remove the stain of original sin. In submitting to allow John to baptize him, Jesus was performing a subservient act.

Another problem here is that even though John proclaims Jesus to be the promised savior, he never becomes a follower of Jesus. After Jesus launches his own ministry John continues on as the leader of his own special little group of "believers."

It would seem that if God came among John's little group in the form of a man, and John recognized and proclaimed that he was, indeed, God in the flesh, the whole group would have immediately turned their attention to Jesus and leaned on his every word. But this did not happen.

Theist Gary Shadle, in his interesting essays questioning the Christian faith and the Bible message, looked at the baptism of Jesus and concluded:

"This is an embarrassment to the faith because if this event has any historical validity, it is apparent that Jesus considered himself a sinful mortal man needing baptism and was probably a disciple of John the Baptist. He likely followed him for awhile, and only became an independent religious leader after John's arrest and execution."