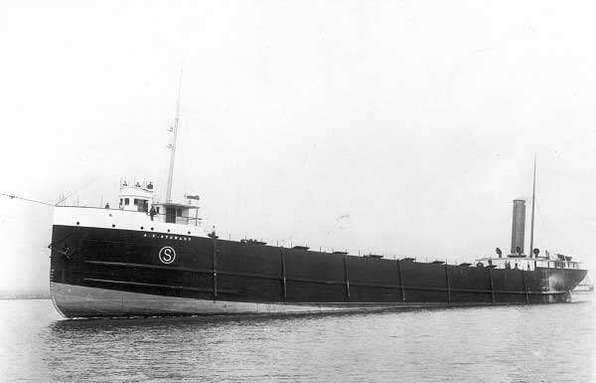 Glenorchy
Trapped On A Sinking Ship

The master of the Canadian freighter Glenorchy was proclaimed a hero even though he lost his ship and its cargo. That is because Capt. Fred Burke risked his own life when he remained aboard his sinking vessel to save a crew member trapped below deck.

It happened Oct. 29, 1924, when the Glenorchy and the freight hauler Leonard B. Miller collided in dense fog on Lake Huron, about six miles southeast of Harbor Beach.

The Glenorchy was downbound with grain in its hold. When the boat entered a bank of fog at about noon, Burke said he ordered the ship's speed checked. As the fog thickened, he said he slowed even more.

"Visibility was only a few yards and we were blowing the whistle," he said.

At about 2 p.m. the crew heard the sound of a whistle on an approaching vessel dead ahead. Burke ordered the Glenorchy turned to starboard on a course he thought would take him safely out of danger. But the maneuver was a mistake. It put his boat on a collision course with the Miller

"The bow of the Miller loomed up through the fog only about 60 or 70 feet away. It was impossible to avoid her," Burke said. "Her prow cut into us just aft of the port anchor and did not stop until her nose was clear up to the bridge."

The crash threw watchman John Scott into a wall of the pilot house and first mate James McMillian was knocked off his feet to the deck. Scott was later treated for bruises and a bad case of nerves in a Sarnia hospital. McMillian was not hurt.

Burke said the Glenorchy started to list at once and "I knew she was going fast. We made ready to man the boats but it wasn’t necessary because the Miller came alongside and took us aboard."

Burke didn't comment about what happened next, but news clippings of the day told the story. They said that when the captain learned that one crew member, Ward White, was trapped in a stateroom, he went back to get him.

With the ship literally sinking under his feet, Burke used an ax to chop his way through a jammed stateroom door to reach White. It was a dramatic rescue. Moments after Burke and White stepped to the deck of the waiting Miller, the Glenorchy turned on its port side, then rolled bottom-up and sank.

The Miller, which was upbound with a cargo of coal, took all 20 members of the Glenorchy's crew aboard, and then limped back to Port Huron, her bow pushed in and a large hole in its port side. The vessel was leaking so badly the pumps were barely keeping ahead of the incoming water. The Miller's master, Capt. William Hagen, declined comment.

The Glenorchy lies upside down in about 120 feet of water. It is well known to sports divers.

The vessel was launched at Bay City, Michigan and given an original name A. P. Stewart in 1901. The name was changed to Glenorchy when the steamer was sold to the Great Lakes Transportaton Co. of Canada in 1917. The Glenorchy was 356 feet in length.