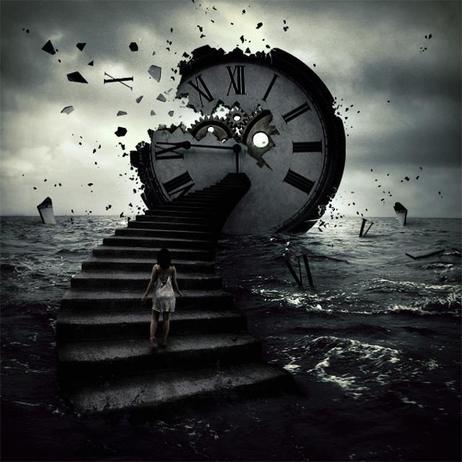 Dealing With The Odd Illusion Of Time

Not long ago I was lamenting to a friend my concern that due to aging the time we were allotted in this world was quickly eroding. Even worse, said I, it appears that the human race also may be rushing toward its own conclusion and that our attempts to stop what is happening seem to have failed.

The response received was quite unexpected. The wise recipient of my muse reminded me that time is an illusion. "If it has not happened yet, then there is still time to do something about it," she said.

Now I have been down this "time illusion" road before in my writings, but in doing so I have only examined the odd effect of extended and shortened time periods that left us somewhat confused after passing through what seemed like "warps" in the scale of things. But the complete metaphysical concept of time as something created in our own minds to help us deal with the universes of our individual making is something else. Like the filmed theory that we all are existing in a computer matrix, the shock of understanding can be grinding to the senses.

As one writer explained it: "There is no such thing as an absolute past, present or future. All are relative to a particular observer. An individual's memory of history, perception of present and future destiny are all defined in (a) time-stream."

If this is so, then each person has a different concept of time and probably a different memory of what happened in the past, and a different impression of what is occurring right now. While it is true that no one else can perceive our own universe through our eyes, just as we cannot see through theirs, we exist in overlapping universes and those of us who interact with one another regularly share memories of the events we share.

Yet as a news reporter who has covered stories and especially court testimony for many years, I am well aware that stories can vary with each teller. No two people seem to be able to agree completely on just what happened at the scene of a newsworthy event. This is why juries and judges have been assigned the task to listen to the testimony and then come up with their own versions of "truth."

The writer of the descriptive piece quoted from above also noted that as individuals existing within the universe created in our minds, the illusion of events and time become real, even if they are ephemeral.

Major events in our lives, like a traffic accident, our marriage, the birth of children, and perhaps the day we are hired or retired from our jobs, become time-streams. The writer noted that "the time-stream is not a history of the universe. It is the history of one space-time event, one individual. That person's past is defined only for them. Someone else's future may be that person's past. Such is the illusion of time."

So what has this to do with my lament about aging and nearing the conclusion of what has been a good and productive life, and watching the world rush toward its own end?

One writer's dialogue with a person identified as Swami Krishnananda, offered the following thought: We are two people, the lower and higher self. The Swami stated that "the higher self is not merely inside us, it is us. But we are not allowing it to manifest itself on account of greed and negative habits and the idiocy of the lower self. The lower self is caught up in the time process and wants to grab the world of perish-ability. Everything that you want to grab in this world is perishable, and the body which is trained to enjoy those perishable objects also is perishable."

The Swami also said: "All that we seek in this world is like moments inside a dream. So what is the value or worth of anything in this dream world?"

Indeed, we have all had dreams that were so vivid we thought we were really in another time and place. This writer even has experienced dreams that continued like serial movies, with new experiences lived night-after-night until the sequence came to a conclusion. Such dreams caused me to wonder if the nocturnal visions might be another me living in a parallel universe.
​
So if we are all living together in a universe of our own making, but sharing the horror of a race toward an apocalyptic end of everything and an unmasking of truth for all, why can't we mentally put the brakes on the insanity that appears to grip the "reality" as perceived around us? Perhaps it is because a majority of the people around us are either programmed by religious and social disciplines not to want to stop anything.