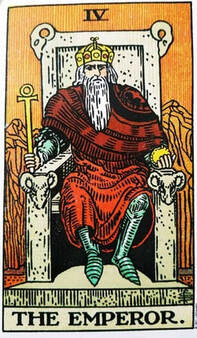 To explain this card in simplistic terms, we continue the Fool’s Journey through the deck. His last stop was with the Empress, where his idea . . . his plans for carrying out his lifetime ambitions have been brought to life in the mother, or the womb. Now he encounters the father figure.

The Emperor, the great king of his domain, shows all authority as he sits on a large stone throne, his massive figure draped in red and scarlet robes, the colors of assertiveness. Red is the symbolic color of sexual energy. Armored covering can be seen on his legs and feet showing that this king is willing to do battle to protect his crown and his kingdom.

The Emperor wears a gold and jeweled crown, and in his right hand he holds a rod which is shaped on its tip like an ankh, a symbol of life, and astrological glyph for Venus. This staff tells us that the force behind The Emperor is divine love.

Carved into the throne are four ram’s heads, pointing to the card’s sign which is Aries. This shows individuality, self-projection, enterprise and expression of personal will.

It is clear that this great, bearded, authority figure represents law, order and jurisdiction. But what does he have to teach The Fool who now comes before him as a newborn babe, anxious to rush out into the world and sample life to its fullest?

This is the beginning of education for the new child. The babe, having just wandered off after being protected in the arms and womb of the mother, suddenly stands before the great authority figure, the king of the world.

The lesson is that there are rules and patterns to this world, and that one person’s will is not always paramount. There are certain behavior patterns that need to be learned before a person can fit into the social order around us.  He also discovers that people in authority, like the Emperor, are there to enforce such guidelines.

While the restrictions can be frustrating, through the patient instructions of the Father, the Fool begins to understand their purpose. He also discovers that by utilizing the constructive mind to manipulate the structures, forms and patterns in life, is also is possible to use them to achieve higher will.

While The Emperor holds the scepter of masculine energy in his right hand, if you look closely at the card, you will see that he also is holding an orb representing feminine energy in his left hand. This is a good sign because it means this king possesses the power of balanced action. The Hebrew letter at the bottom of the card means window.

Notice that The Emperor appears with mountains in the distant background. The mountains are separated from him by a stream of water that flows across the card. As explored before, the water represents the subconscious mind, which in this case is present, but located behind the business of conquest, rule and authority.

The Emperor is Key Four in the Major Arcana. Four is a stable number representing solidity in geometric terms. Buildings have four walls, rooms with four corners. It takes a lot of energy to move them.

Playing with the numbers we find that The Emperor is linked to Key 13, the Death card. Four other cards in the complete tarot deck also bear the numbers 13. These are the queens cards in the Minor Arcana.

Throughout history the kings have maintained their power by force (death) and through their relationship with the queens who legitimate their rule and bear their heirs.

The number four also is the sum of 2 plus 2, and the multiplication of 2 times 2. This suggests that his power is rooted in the High Priestess. It is from her gown that the water of subconscious thought flows through the river seen behind the Emperor's throne.
​