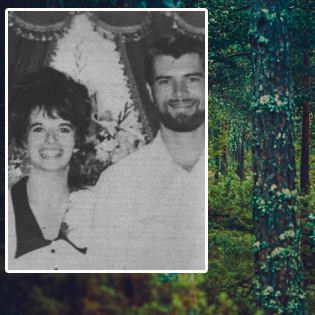 Among the many unsolved mysteries crammed in police files all over the country is that of the strange and apparent assassination of the Crowden Family near White City, Oregon, during the Labor Day weekend in 1974.

Richard Cowden, his wife, Belinda June and their two children, David James, five, and Melissa Dawn, five months, went missing while picnicking at a campground at the nearby Siskiyou Mountains. The family was last seen buying a quart of milk at a general store less than a mile from the campsite.

After failing to return home that afternoon, Belinda’s mother drove to the campsite to look for them. She found the Crowden car parked undisturbed at the site. Also she told police she found Belinda’s purse, the baby’s diaper bag, the quart of milk and other picnic items on the picnic table, also undisturbed. Richard’s wristwatch and his wallet, containing $23 were found on the ground alongside a nearby stream. She called police.

Authorities even thought of the possibility that Richard and Belinda disappeared on purpose as a way of escaping some unsolvable dilemma in their lives. But careful research turned up no evidence of family trouble. Richard’s job as a trucker provided enough money to support his family. The family was not behind in its debts.

The mystery remained unresolved for nearly a year. Then in April 1975, two men hunting in the Suskiyou forest came on human bones in and around a small cave. Police were summoned. Forensics teams soon found that these were the bones of the missing Cowden family. The remains of Belinda and the two children were found in the cave. Belinda and her son, David had been shot multiple times by a .22 cal. firearm. The baby died from severe blows to the head. Richard’s remains were found just outside the cave entrance. Police said his body was too decomposed to determine the cause of death.

Was it a murder-suicide? A failure to find a weapon at the scene soon ruled that theory out. This left authorities with only one other possibility. The Cowdens had been taken prisoner, forced to walk to the cave, and there some person or persons proceeded to murder all four family members.

The killings have remained unsolved to this day. Police found a lack of motive since nothing had been stolen from the campsite.
​
There has been one suspect. He was paroled murderer Dwain Lee Little, who was spotted buying gas in the area the day the Dowdens went missing. Little was later convicted in the rape and murder of another woman in 1980 and is now serving a life sentence in Oregon State Prison. He has never confessed to the Cowden killings, however.
​