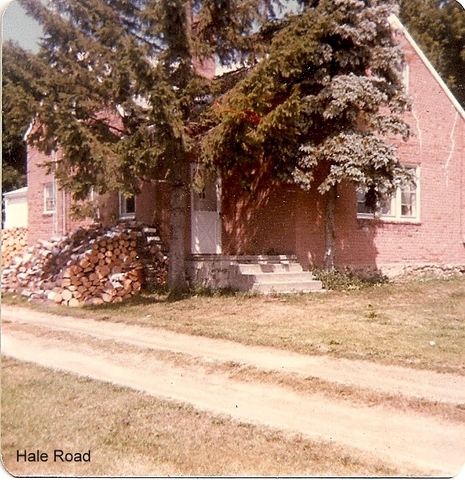 I had to break a leg to discover I was living in a haunted house.

It happened in 1978, when we were occupying a two-story brick country home a few miles south of Sandusky, Michigan. We had experienced a serious ice storm the prior year. After living 14 days without power, I was determined to be self-sufficient. I installed a wood-burning furnace, wood-burning cook stove, bought a chain saw, and began cutting firewood.

My father owned a nearby farm which offered a forest of fine hardwood, just waiting for my saw. It became a weekend ritual for my teen-age son and I to drive to the farm, visit the folks, and return with our pickup laden with fresh-cut logs. It was great exercise, a fine day in the out-of-doors, and it kept me in weekly contact with nature and my parents.

I thought it really couldn't get any better than that until the day a twisted Maple branch threw a large tree trunk at me. The tree came down on my left leg, cracking the bone near the knee. I ended up in a cast from my ankle to my hip, and was forced to spend most of my time lying flat on my back for the next two or three months. Because it was a vertical crack my doctor would not remove the cast or let me stand on that leg until x-rays no longer showed signs of that crack in the bone.

Suddenly my busy schedule braked to a stop. I had time to reflect on my life. I spent hours thinking, reading, and watching television. My wife made weekly trips to the local library, keeping me stocked with books. Among the books I whipped through that fall was "The Amityville Horror," a popular story about a haunted house in which events got so strange the occupants were forced to move. The book was supposedly based on a true story, although I have always had my suspicion that it was grossly embellished.

The point is that during the reading of this book, I began to compare some of the strange events linked to that New England house with goings on in our own home. Because I was always on the run, never taking time to stop and really look at my surroundings, I missed the fact that we had something supernatural happening right under our noses.

There was an unfinished room on the second floor that was always full of flies. Whether spring, summer, winter or fall, flies buzzed constantly in that room. We sprayed it. We hung flypaper. We even used a professional device that sprayed the entire house with enough chemicals to destroy creeping things in every crack, from the basement to the attic. Still we had flies. We kept the door closed and never used that room. Except to pass through to reach an attic where we kept a pail to catch water. Let me explain that.

The roof of the house had a perpetual leak. Before we moved in, a piece of the plastered ceiling in the living room collapsed from water damage caused by a leak in the roof. The house stood empty for several years before we bought it, so I was not surprised that we had problems. I enjoyed repairing and restoring older homes and expected to have some work to do. The leaky roof was my first project.

I began by using roof tar to patch any places on the roof where I thought water might be getting in. Then I repaired the damage in the ceiling by installing tile. The next time it rained I entered the attic to see if the leak was fixed. It wasn't. A stream of water was flowing  along one of the open roof rafters. To save my new ceiling I placed a pail on the attic floor. It was a nuisance to have to remember to empty the pail after every rain.

Next I re-roofed that side of the house. I installed roofing tile all the way to the peak, installed new flashing around the chimney, and used roofing tar abundantly. When it rained again, the leak was as bad as ever.

I finished roofing the entire house, carefully tarring and capping the peak. The leak was still there. There was nothing more I could do. As long as we owned the house I had to always remember to have empty pails ready in the attic to catch the water. I tried to carefully trace the flow of water during a rainstorm and could never find its source. It seemed to appear out of the side of the roof rafter.

There were other things about that house that bothered me. It was never a happy home. As a family, we probably had more fights and arguments there than any place we ever lived. That was not like us. We were always close knit. It was as if we were  possessed by a spirit of meanness that took charge from time to time.

The house was designed backwards, if that makes any sense. The driveway approached the house from the south and then stopped. The attached garage had its door facing the north, away from the driveway, and could never be used. The kitchen was located just off the garage. A downstairs bedroom, which also was located on that side of the house, should have been the kitchen. You had to walk through the downstairs bedroom to get to the stairs leading to the upstairs bedrooms. If I had stayed there for any length of time, I had plans to rebuild the house the way I thought it should have been.

We suffered the worse bout of influenza in our lives in that house. It swept the entire family within hours, making us all so sick we could not take care of each other. We barely had the energy to line up at the bathroom, trying to time our vomiting and diarrhea so we were not in each other's way. That flu knocked us down for days. No one could fix a meal but then no one wanted to eat.

Our youngest daughter, Jennifer, was born while we lived in that house. My wife became very ill and nearly died in childbirth. She was hospitalized more than once, but survived to have a healthy baby girl.

Another event linked to our wood cutting also occurred there. It was late in the fall again, and all the leaves were fallen as we hauled logs from a lovely elm that our son had fallen. The tree had vines wrapped around it, but we didn't pay much attention. The vines turned out to be poison oak. My son and I both broke out in a serious rash. My wife also developed a rash because she handled our clothes after we came in that night. It was such a serious attack that we all sought medical attention. I discovered that I am severely allergic to poison oak. I was hospitalized for a week.

We had a serious fire there. We had a large barn in the back yard that burned, nearly taking the house with it. The fire also claimed our family cat, some pet rabbits, and nearly killed our daughter's horse, which was led out in the nick of time. We lost all the tack. Our neighbor's combine, a mow filled with his hay, and several other pieces of farm equipment also burned with that barn. Our older teen-age girls were home alone that day with Jennifer, who by then was just toddling. Our mailman happened to stop at our house and saw smoke pouring from the barn. He investigated and found Jennifer toddling in the burning barn. He got her out of the building moments before it exploded in a ball of flame. The girls were so intent on saving the horse they didn't notice that Jennifer wandered into the burning barn. Our mailman saved her life.

After selling the house and moving on, I later learned that the place had a dark history. One occupant committed suicide in the attached garage.

I believe we were sharing that house with bad spirits who were working overtime to either kill us or drive us away. Oddly enough, we moved from that house into another country home in the area that also was haunted. In fact, we have encountered several haunted houses over the years.

I have concluded that many older buildings are haunted. That seems to be because we humans are never prepared for death. When it comes, we don't seem to realize that we are dead. Or if we know, we choose to linger at familiar places rather than pass through the darkness to find the light.