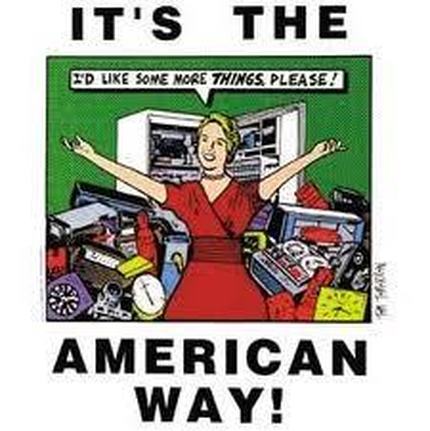 Unless you were born and raised in a so-called third world country where the overcrowded masses eke out their existence in extreme poverty, or raised in an impoverished home in the United States, you were groomed from childhood to worship materialism.

The need for warmth, food and shelter is basic. But to desire a luxury home with two-car attached garage, a swimming pool, two bathrooms, closets filled with clothes and a wine cellar stocked with the world’s finest, is pure gluttony.

The celebration of Christmas is, in reality, training ground for children. By experiencing the lights, glitter and rich foods leading up to the big day when a magical stack of free gifts are awarded, the child quickly adapts to the artificial thrill of acquiring shiny but usually unnecessary things. I personally remember the excitement felt during the build-up, and then the ugly sense of disappointment and depression within hours, if not minutes after the last gift was opened.

It seemed that everything we did for weeks, and sometimes months before Christmas was in preparation for that moment of gift exchange. Then the bright papers were rapidly torn away, the secret things in the boxes revealed, and after that the fall. Is that all? I remember asking myself.

Indeed, I have since learned; it was all predicated on a hoax. The Santa Claus story, the baby Jesus story, the colored lights on artificial trees and on the houses; it was all faked. The plastic toys were usually broken or tossed aside before New Year. The best gift might have been a pair of ice skates, or a new sled.

I grew up not understanding why I disliked Christmas as much as I did. But I fell into the rut of materialism just the same. My wife and I were both professional people who worked hard to acquire as much material wealth as possible. We usually had two and sometimes three cars in the driveway. We bought and sold several homes. And Christmas at our house was probably more elaborate than anything either my wife Doris or I experienced during our childhood.

We did something very strange about 20 years ago. We got interested in esoteric things, began studying new concepts of life, and decided we had been going in the wrong direction for a very long time.

We sold or gave away virtually everything we had. The house, the cars, the big color televisions, luxury beds, stereos, vast music collection, books, furniture, and a large display case filled with rare antique and collectable glassware. It all went. We had two large auctions over the course of about five or six years before we disposed of everything. But eventually it was all gone.

We used the money to pay off all of our debts, and then struck out in our one car and a Ryder truck filled with clothes and a few things we thought we could keep, for Arizona where we lived on the road and eventually with the Navaho and Hopi people.

Within months nearly everything in that truck was stolen from us. We were homeless, destitute, and often without jobs. But we learned a valuable lesson during our three years in the wilderness: Things didn’t matter.

It took wit and pure guts sometimes, but Doris and I got through that ordeal. To the day she died, Doris and I were still living with only the things we needed and little else. It is still my life style. I now live in a modest, one-bedroom apartment, I gave away the 12-year-old Ford and gave up driving. I eat my meals at a small table where I also write and read.

Other than enjoying family and a nice meal, we stopped celebrating Christmas.

Life has been good.