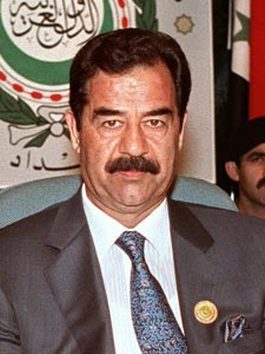 It has been estimated that Saddam Hussein was responsible for the deaths of 2 million Iraqis during his reign of power from 1979 to 2003. The numbers, which include the civilians in both Iraq and Iran killed during the eight years of war that went on between those two countries, and the Iraq invasion of Kuwait may have been much higher.

Hussein was a strongman who ruled an unstable region with an iron fist and managed to maintain a relative peace among Sunni, Shia and Kurdish tribes which today remain in intense religious Islamic conflict.

Hussein's two major but unsuccessful wars were first against Iran and the second his decision to invade Kuwait. The Kuwait conflict brought United Nations forces down on the Iraqi Army and is remembered as the Gulf War.

Iraqi forces under Hussein’s leadership also conducted a three-year campaign against the Kurdish tribes along the northern border regions between 1986 and 1989 that some historians say left an estimated 182,000 Kurds dead. Also caught up in the attacks were Shabaks, Yazidis, Assyrians, Turkoman and Mandean people. Entire villages were destroyed.

Hussein and the top government officials around him were Sunni. He was a member of the Arab Socialist Ba’ath Party and played a key role in the 1968 coup that brought the party and eventually Hussein to power in Iraq.

Even when he was vice-president, Hussein essentially held the reins of power in Iraq because President Ahmad Hasan al-Bakr was in poor health. Saddam took official control of the country when Bakr resigned in 1979.

Because of the political instability of the region, Hussein created a powerful security force and used it to smash efforts to block attacks against the Ba’ath Party rule. He also nationalized local industries, including the oil industry, and placed all of the state-owned banks under government control.

It was a harsh way of running a country, but under the circumstances, the Iraqi people enjoyed life in a socialistic system that provided well for the people. Hussein built roads, schools and hospitals and improved the living standards of the people, which maintained a general although uneasy stability.

Saddam cleverly made himself the center of a personality cult within Iraq and began to carry out ambitious goals that included achieving hegemony over the Arab people throughout the Middle East. This eventually led to his downfall.

He launched his ambitious invasion of Iran, in hopes of acquiring control of that large and oil-rich nation, in September, 1980. The cost of the war and the interruption of Iraq's oil exports caused him to scale down his programs for economic development. Iran proved to be a formidable foe, the war dragged on for eight long years, and by 1988, both countries agreed to a cease-fire.

What is not well known about that conflict was that the CIA was heavily involved in supporting Hussein. Iraq was supplied with guns, missiles and possibly chemical weapons. At one point Saddam enjoyed a close alliance and may even have worked as an agent for the CIA.

In August, 1990, the Iraqi army invaded Kuwait at Iraq's southern border. Again the motive appeared to be an attempt to seize control of that little country's rich oil supply. This launched a United States and United Nations counter assault  and a world-wide trade embargo against Iraq. The UN forces crushed Saddam's military forces but then chose to stop the fighting before toppling Hussein.

Knowing the Saddam's forces were weakened, the Shi'ite and Kurdish forces rise up in an internal rebellion. They soon discovered that the Iraqi Army was not as broken as first thought and Saddam successfully suppressed these uprisings. An unknown thousands more Iraqi people perished in the fighting.

After the 9-11 attack on the United States, and an assertion that Osama bin Laden's al-Qaeda network was the culprit, President George W. Bush directed an all-out military invasion of Afghanistan, where Bin Laden's gang was believed to be hiding out. Then, for some odd reason, Bush turned his attention to Iraq with implications that Saddam Hussein also might have been involved in the 9-11 attacks. Saddam denied any involvement.

Next, Mr. Bush accused Saddam of harboring "weapons of mass destruction" and demanded that he allow U.N. weapons inspections. Saddam allowed limited inspections and no such weapons were found. On March 17, 2003 Bush ordered Saddam to step down from office and leave Iraq within 48 hours or face war. When Saddam refused to comply U.S. and British forces invaded Iraq.

This time Saddam was driven from power. He was captured hiding out near Tikrit, and brought to Baghdad where he was tried on charges of killing 148 citizens of the Shiite town of Al-Dujayl. The court found him guilty and sentenced him to death. He was publicly hung in December, 2006.