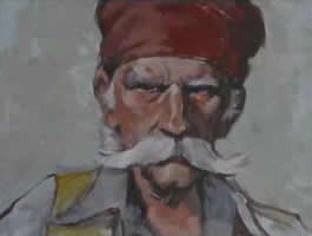 It was on or about 1830 that Matthias Stormberger, a lowly cow herder at Rabenstein, Germany, recorded some remarkable visions of the future.

This man from out of common stock gave such specific descriptions of a future world, three world wars, the Great Depression, a falling away of the Christian church, and finally the end of times. His prophetic visions are startling.

Whether told in his own words, interpreted from German, or written by others who heard Stormberger’s prophetic visions, is not clear. What we know is that the prophecies are brief, but loaded with accurate and vivid images of events that occurred long after Stormberger told of them.

"Iron rods will be built and iron monsters will bark through the wilderness." This is clearly a description of a railroad. James Watt of Scotland built the first steam engine in 1774 and early designs of steam powered engines that pulled cars on iron rail were already appearing in Europe and areas of the United States by 1830. Whether Stormberger saw these engines operating is unclear, but his description of "iron monsters" barking through the wilderness is almost poetic for anyone old enough to remember the actual sound of trains pulled by steam engines.

"Cars without horses and shaft will come . ." It was a German, Karl Fredrick Benz, who designed the first automobile powered by a gasoline engine. He patented his car in 1879, nearly 50 years after Stormberger perceived it. Yet the concept of a four-wheeled vehicle powered by a motor was much older. French designer Nicholas Joseph Cugnot built a steam-powered machine to haul artillery for the French military in 1725. The famed Leonardo da Vinci designed the concept of both an automobile and the airplane during the 1400s. Stormberger’s vision, however, identified "cars." He saw many of them "without horses and shaft." In the days of horse-drawn wagons, there was a long wooden shaft on the front of the wagon on which a team of horses was attached.

"And man will fly through the air like birds." Leonardo da Vinci studied flight in the 1480s. He left over 100 drawings illustrating his theories on flight. But his flying machine, which was, in effect, a helicopter was never built. Brothers Joseph and Jacques Montgolfier invented the first successful hot air balloon, and the first manned flight occurred in 1783, long before Stormberger made his prediction. It was not until the Wright brothers made their famous flight with a motorized craft in 1900 that aviation became a reality. And men do, indeed, fly through the air today like birds. The skies are filled with aircraft of every description.

Here is where Stormberger’s visions start getting interesting. His next sentence states that "The Catholic faith will almost completely disappear, the religiousness will be quite badly respected, they will not earn any respect due to their way of living." We are today witnessing the decline of the power of the Roman Catholic Church, largely following the revelations of the massive cover-up of pedophilia between priests and young boys that has been secretly occurring in churches all over the world. That cover-up went all the way into the Vatican. Donahue foresees the end of the Catholic Church. He says there will be one final Pope after Benedict XVI.

"There won’t be many good Christians among the people, the Commandments of God are no longer respected by the aristocracy as well as by the smallest worker." Again we are witnessing the decline of the Christian faith in spite of the fact that the church appears today to have a grip on governments and the media. While older people are clinging to their faith, the youth are turning away from organized religion. The Iraq war, which is basically a battle between Christians and Moslems, is waking a lot of people up to the fallacies of religiosity. There is a quest for a new spiritual path, one that is best perceived in the world move toward a socialist concept of government. The outmoded and archaic religions of the world are being phased out to make way for a spiritual and mental evolution of the human race.

"One will not think the greatest unfairness to be a sin. When the faith disappears also the love of the next one will completely lose itself. One will not estimate the justice, often the poor one will not be given right and he will be less respected than a dog." And here we have a perfect description of our contemporary society. In spite of laws declaring the rights of individuals, the concept of justice is limited only to those with the means to purchase it. The courts are in league with big business and religious conservatives as they strip away laws that protect the Earth and the dignity of the poor. We are seeing a failure by most people to love so wickedness abounds.

"After this a mischief will arise that has to be regretted, there will be no order among the people." Indeed, something is about to happen that Stormberger perceives as "a mischief" that will be regretted once it begins. And because of it, chaos will prevail. What did he see? Perhaps it is release of biological or chemical agents by terrorists that sicken and kill the masses? Is it the Iraq war? A world war? That it is "mischief" suggests that it is not brought about by accidental action, but is a deliberate deed. This "mischief" apparently disrupts social order. Thus it suggests that authority is so stricken governments can no longer be effective.

"When in the outskirts of the forest the iron road will be finished, and there the iron horse will be seen, a war will begin, to last twice two years. It would be fought with iron fortresses that move without horses." This was an almost uncanny vision of World War I from a very personal perspective, even though Stromberger was not alive to witness it. He lived in the Bavarian forests bordering Czechoslovakia. On the day hostilities broke out, Aug. 1, 1914, a new railroad line between Kalteneck and Deggendorg, along the edge of the forest where Stormberger lived, was opened. The First World War lasted exactly four years. The iron fortresses that moved without horses was obviously a reference to the iron tanks used in this war.

"Two or three decades after the first war it will come one a Second War still larger. Almost all the nations of the world will be involved. Millions of men will die, without being soldiers. The fire will fall from the sky and many great cities will be destroyed." Exactly 20 years, two decades, after the conclusion of the first war, Hitler’s troops attacked Poland and launched the first phase of World War II. Three years later, Japan attacked the United States at Pearl Harbor. There were, in effect, two wars raging on the planet, although because Germany and Japan were considered "axis powers" we considered it a single war. The fighting concluded after the United States dropped two atomic bombs on Japan. Millions died without being soldiers and fire fell from the sky with entire cities being destroyed.

And this is where Stormberger’s visions start to get scary. He said: "And after the end of the Second Great War, a third universal conflagration will come, so that it will determine everything." Notice that he refers to the third war as a "universal conflagration." The word conflagration means "fire" or "inferno." From what we know about contemporary weaponry this appears to be a description of a nuclear conflict. Notice what else the prophet has to say about this conflict.

"There will be weapons totally new. In one day, more men will die than in all the previous wars. The battles will be accomplished with artificial weapons." Indeed, we have weaponry today that are so secret that we have only had hints of their power. Experimentation with space weaponry, mind control, low-frequency sound and a multitude of other devices that will stop entire armies cold in the field before a shot can be fired has been going on for years. China, Russia and the United States have been developing missiles that can deliver multiple nuclear warheads halfway around the world. What Stormberger perceived as "artificial weapons" were devices that fight battles from far away and at the push of the button. To the operator it might seem like a computer game. To hundreds of thousands of people on the receiving end of these weapons, it will not be a game.

"Gigantic catastrophes will happen. With the open eyes, the nations of the planet will go through these catastrophes. They won’t know what is happening, and those that know and tell, will be silenced." This is beginning to occur. We have already witnessed the worst natural disasters ever recorded in human history. Hundreds of thousands of people are dying in massive earthquakes, mud slides, hurricanes, typhoons, bands of super tornados, and forest fires. As the world heats from greenhouse gas emissions, biting insects and super diseases are appearing.

"Everything will be different from before, and in many places the Earth will be a great cemetery. The third war will be the end of many nations." This is the very warning many contemporary visionaries have been issuing. If the world cannot avoid a global nuclear war, our fate is devistating. He says he perceives China winning this war by completely destroying the United States, but in the process, is left almost destroyed from within from counter-attacks. Other nations may also be involved since this may start with a conflict in the Middle East over oil. Thus Stromberger perceives many places where the Earth will be a great cemetery. Only a remnant of humanity will be left.

In his final verses, Stormberger appears to be seeing a catastrophic event that is beyond his ability to explain or even properly describe. He notes that the sky and earth both burn and that people fall ill because it is the end of the world. Yet a few who manage to hide themselves under iron and stone are spared. Is it a nuclear war, a great flare from the sun, or something else?

His vision: "Over night it will take place – in a pub in Zwiesel (a German city known for its glass) many people will be together, and outside the soldiers will ride over the bridge. The people will run out of the forest. Those who hide themselves at the Fuchsenriegel or at the Falkenstein (a stone castle) remain spared. Who survives must have an iron heading.
"The people become ill, and nobody can help them . . ." a possible reference to radioactive poisoning or perhaps a plague? "However it will continue, and what follows then, is the end of the world. Sky and earth burn, because it is the time when everything comes to an end. And this time will be, when the wild hunt with fire and sulphur roars over the country."

After this, he said, "no humans will know anymore where Zwiesel and where Rabenstein (German towns) have been. Of all frights this will be the last. When the people fall off the bank like the flies off the wall, the last time begins. It will be horrible."

He says there may be a few survivors who bridge a journey from this dying world into another universe. The bodies will not go, however, only the cellular memory. Thus to an outside observer from the past, like Stromberger, he would see people dropping "like flies off the wall."

Amazingly, Stormberger looks even beyond this final event to a time in the distant future when he sees a pastoral scene: "But when however, someone at the whole Danube stream finds still another cow, then she is worth it to be attached with a silver bell by the owner.