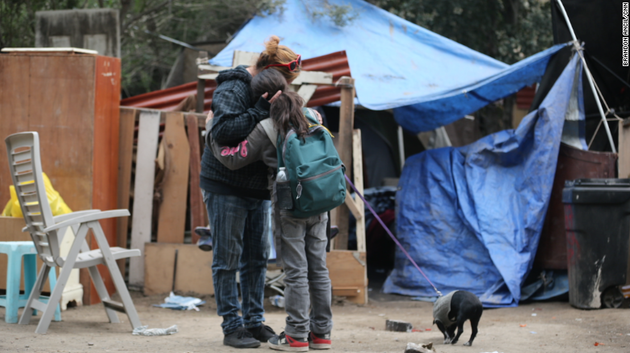 Statistics Prove We Are In A Depression

The media doesn’t like to use the word “depression” because it connotes a dark time in world history when people were not only out of work but homeless, standing in long soup lines and struggling just to stay alive.

In case you haven’t noticed, this is exactly what is happening throughout large sectors of the United States. We suspect this phenomenon is occurring throughout Europe and in other parts of the industrialized world.

One reason the problem doesn’t appear as severe today as it did in the 1930’s when the Great Depression was at its peak is that we have put socialized programs in place that are helping put food on tables for poverty stricken families, our hospitals offer minimal but free medical service when treating the indigent, and a lot of distressed and homeless families are gathering in “tent cities," under bridges and sometimes in underground sewer and service tunnels for shelter.

The problem is here. It is just being hidden from public view as much as possible. The tent cities are located in special areas where they are not well seen. Cities have laws prohibiting pandering or even sleeping in parks and downtown shopping areas. But if you look you can spot them among us. While driving through a major downtown metropolitan area look closely; notice all of the shabby-appearing people, many of them carrying all that they own in back-packs or old grocery carts, walking around on open streets. They keep walking because it is illegal for them to sit for any length of time on public sidewalks.

It is an election year so the talking heads representing the corporate-owned media are not even using words like “recession” in their reports. Instead they talk about all the profits and losses stockholders are experiencing on Wall Street, and they give us “government statistics” that indicate economic “upturns.”

It may be true that large American corporations are making money. And we hear stories all the time about the big salaries enjoyed by popular athletes, CEO’s and corporate presidents. Our nightly television programming depicts “average” citizens enjoying the good life, driving around in new late-model cars, and dealing with situations once experienced by average American families in the 1970’s and 1980’s.

We are getting the false illusion that all is well. But this is a lie. Those stories represent the wealthy ones who are controlling the wealth at the expense of the others.

If you search on line and look for reports by real journalists who are still in the trenches and digging for real news, you will find out how it really is to be living in this country. You will come to an understanding why a candidate like Bernie Sanders has gained so much popularity among the average American citizens. He is speaking their language. He has tuned in on reality and is offering a plan to help people crawl out of this quagmire. But a lot of the people who really need this kind of help are being suckered in by the smooth siren call of skilled publicists who know how to sell the lies. The word "socialism" is being construed as an evil thing.

A recent story in Natural News gave us this startling report:

“According to data compiled by the Bureau of Labor Statistics, roughly one-quarter of the American working-age population is currently unemployed, a figure that matches the unemployment rate during the Great Depression.”

The story went on to say that statistics found on a chart created by the Senate Budget Committee show that “nearly 30 million Americans between the ages of 25 and 54 are currently not working – not because they aren’t able, but because they simply cannot find work. This translates into one in four of America’s most eligible workers.”

Even more startling; the story noted that the current group of unemployed people "is more than 3.5 million larger than before the recession began in 2007."

This means that our situation is not improving. It has been getting steadily worse for the past 12 years.

That these statistics were pulled from a Senate Budget Committee chart makes it clear that our elected legislators are fully aware of the state of the American workers. Yet our Republican dominated House and Senate are following the call of the “Teabaggers,” an illiterate pack of people that has been convinced that excess government spending is the root cause of this nation’s dilemma.

In a sense, the Teabag perception is almost correct. Except this gang has bought the corporate story that the problem is caused by social spending designed to help the poor and needy. Consequently they and the people representing them in Washington are incorrectly attacking working programs like Social Security, Medicare, the federal health care plan, and a variety of other badly needed programs designed to assist indigent families like food stamps and assisted living programs.

They fail to see the real culprit in all of this; big government spending for an ongoing wars against terror and drugs. The nation is wasting billions and now more recently even trillions of our tax dollars on continued warfare in the Middle East and the arrest and imprisonment of citizens found dealing in the growing and sale of marijuana and various other popular “illegal substances.”

Let’s face it, the reason drug sales are so popular right now is (1.) it is a way for some unemployed people to acquire money to maintain their families, and (2.) the drugs help people forget the situation in which they are now forced to live.
​
We should not have to explain all of this. Anyone with common sense can just look at the state of our nation and figure it out for themselves. It would help if they turn off their television sets, stop numbing their brain cells with nightly rations of beer or other substances, and give up football. If they do this even for a few weeks they might be surprised at what amazing revelations will come to them.