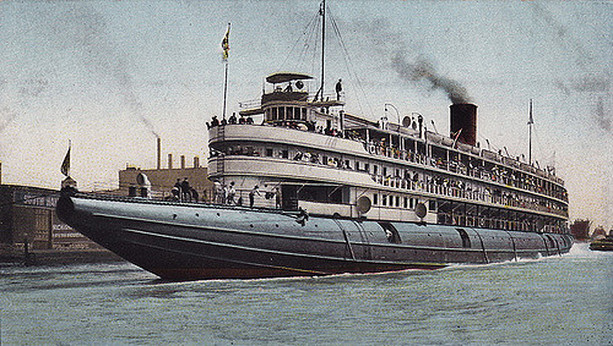 Christopher Columbus
The Ship that Toppled a Water Tower

The Christopher Columbus, an oddly shaped "whaleback" style passenger liner, turned out to be one of the most popular and successful cruise vessels to traverse the Great Lakes.

Designed by eccentric Scottish shipbuilder Alexander McDougall, the Columbus was launched in 1893, just in time to carry passengers on short excursions to and from the Columbian Exposition in Chicago.

People liked the ugly ship with a bow that looked like the snout of a pig. Those who booked passage said it offered a smooth ride, even in a rolling sea. The popularity of the Columbus grew and during its 44-years, the steamer carried a record 2.6 million passengers.

There apparently was only one accident to mar the boat's nearly perfectly safety record. It happened at Milwaukee on June 30, 1917, when the Columbus accidentally struck and toppled a 100-foot water tower on the bank of the Milwaukee River.

Sixteen passengers died and another 30 were hurt in the freak accident. It could have been worse. There were more than 500 passengers aboard the liner, most of them students and teachers from Northwestern University, the University of Chicago and other summer schools operating in Chicago.

The steamer was on an excursion to Milwaukee and was leaving the port, on its way back to Chicago, when the mishap occurred.

As Capt. Charles E. Moody and the harbor tugs were carefully swinging the 362-foot-long ship around from its moorings in the Milwaukee River, many of the passengers crowded the deck railings to watch. Something went wrong. A strong river current was blamed. The bow of the ship plunged forward into the bank of the river where it collided with one leg of the water tower.

Moody was on the bridge and saw the impending danger. He ordered the ship's engines operated full astern but it was too late. The boat was just beginning to back when the tank and 25,000 gallons of water toppled.

Witnesses said the huge tank seemed to drop in slow motion even as the officers on the bridge frantically shouted orders to get out of harm's way. The steel tank hit the wheelhouse a reflecting below and then fell through three decks, sending torrents of water racing through the ship.

The wheelhouse was demolished but Moody and a wheelman, James Brody, miraculously survived.

"The next thing I knew the pilot house was lying all around me and Brody was nowhere to be seen," Moody later reflected. "I called 'Jim, Jim,' as loud as I could, then I heard him call back: 'Here, captain.' I crawled over the deck where he was, about 10 feet, and there he sat, crying."

All around them was devastation. The decks were ripped into kindling and many people were found crushed beneath the weight of wood and iron. Other passengers were knocked off the decks and still others were believed to have jumped into the river to drown.

Witnesses said the dining salon of the Columbus looked like a slaughter house.

Those not hit by the crushing force of the tank and collapsing decks were deluged with water. Staterooms were awash.

As serious as the accident was, the Christopher Columbus went on sailing the lakes for another 19 years before it was scrapped at Manitowoc, Wis., in 1936.