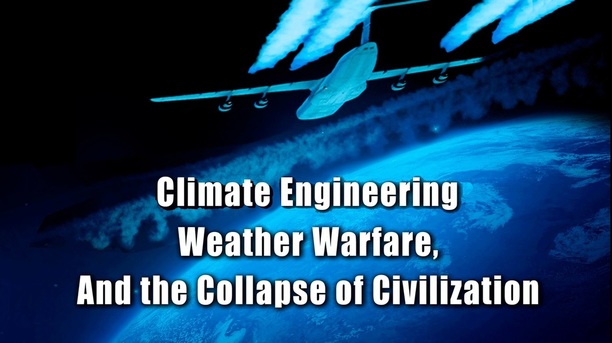 Do We Dare Try To Stop Climate Change?

After years of ignoring what Al Gore deemed “an inconvenient truth” about climate change, and now that the Earth is plunging into what some scientists fear may be runaway global warming, researchers are now looking at their last option; artificial cooling.

Some people believe the crisscrossing chemtrails seen almost daily in the high stratosphere are a sign that someone . . . possibly our military . . . is already busy trying to divert direct sunlight from cooking the carbon dioxide and methane gasses already mixed in the Earth’s atmosphere. It is believed that tiny particles of aluminum, barium and other light metals are fluttering around up there, reflecting solar energy and slowing the warming.

(Or it might be an attempt to poison us and reduce the world's population.)

The problem with the daily dusting with these light metals is that they slowly settle to earth, mixing with the air we breathe, and get in our lungs. There is a constant residue of material collecting on the surface of our cars and other metallic things left out-of-doors.

The government denies using chemtrails to ward off global warming. But researchers admit that this is one of several techniques of climate engineering being considered if a decision is made to use an artificial method of cooling the planet.

The SRM proposals include the use of space or land-based solar reflectors, stratospheric injection of aerosols, seeding tropospheric clouds with salt aerosols or ice nucleation to make them brighter and more naturally reflective and a variety of other surface changes on both land and sea to reflect solar rays back into space. These include vast mirrors and bright plastics in deserts, atop mountains and ice caps, creating white blacktop for roads, painting roofs white and planting light colored crops.

Other more radical ideas include placing giant mirrors in orbit and mining the moon to create a shielding cloud of dust that would surround Earth.

CDR proposals include extensive tree planting (which has already been occurring in an effort to counter the ongoing destruction of old-growth forests) and the injection of iron into the world’s seas to increase the amount of phytoplankton that feeds on CO2.
​
The use of Sulfur Dioxide (SO2) also has the effect of reducing CO2 levels. But to make this work researchers calculate that it would take at least one million tons of SO2 dropped from thousands of balloons, planes or rockets, at a cost of up to $50 billion a year. And it would require a constant application. The drawback from this plan would be its effect on world rain patterns and a non-uniform cooling effect over the entire Earth.

Since trees and vegetation use photosynthesis to turn carbon dioxide into fuel for growing plants, researchers are looking for ways to utilize this same kind of reverse energy system to power vehicles, heat homes and run factories. Various devices like hydrogen burning vehicles are being developed to help suck up and burn the accumulated CO2 in our atmosphere.

There is a complexity to this problem since the CO2 is now mixing with a vast amount of deadly methane gas and hydrogen sulfide gas also being emitted from the oceans, melting ice and natural gas leaks. Both gasses are highly flammable and more toxic to breathe than CO2.

There is a concern among many scientists that the use of artificial means to force a cooling of the planet will have unforeseen repercussions that might create more problems than they fix.

Brad Allenby, a professor at Arizona State University, was quoted as saying: “any technology that is powerful enough to change the climate is powerful enough to have a lot of unanticipated consequences. If that happens, then you’re looking at the potential for major chaos in countries like India and that, of course, becomes a problem for the entire world.”
​
But to do nothing at this point appears to have consequences that nobody wishes to face.