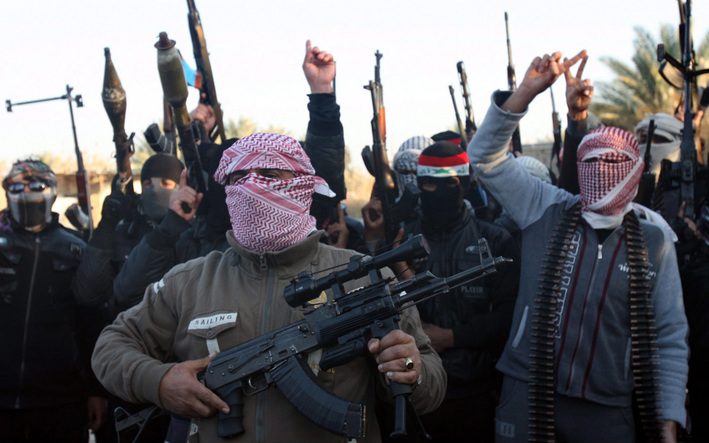 Journalists and military personnel involved in Middle Eastern affairs have been obviously confused about the sudden appearance of the malicious terror organization that shoots videos of their members cutting off heads of innocent journalists and social workers caught in its web, and constantly changing its name.

This organization, best known as ISIS, ISIL or Islamic State is not only international in its scope and extreme in its deadly acts but confusing in its purpose. Yet its membership appears to be swelling and young people from other nations; even England and the United States have been running off to join its ranks. And this is an enigma in itself.

We owe our gratitude to the researcher or researchers for Wikipedia who obviously spent a long time tracking the origins of ISIS and piecing all of the parts of this puzzling terrorist organization together. Yet wading through the Wikipedia record and using the information to come to some kind of understanding is a challenge. Not all written information about the ISIL movement is in agreement, and many of the Islamic nations are claiming that ISIL fails to represent the Moslim faith.

So what is it?

In a nutshell, the Islamic State appears to offer a militant force of between 52,000 and 257,000 soldiers operating in Syria, Iraq, Libya, Nigeria, Lebanon, Egypt, North and West Africa, and Southeast Asia. The group is Arabic in nature with an ideology of Salafi jihadism and Salafism.

To clarify the ideology; Salafi jihadism describes the beliefs of Islamic Salafi who practice violent and offensive jihad. Salafism is believed to be synonymous with Wahhabism. This is because Salafis follow the teachings of Muhammad ibn Abd al-Wahhab, an Eighteenth Century reformer who advocated a purging of many of the Islamic practices and called for a return to the harsh life-style of early Muslims.

The Salafis then are strict followers of the teachings of the Queran and they call for a complete purging of all foreign influences on the Muslim faith. They have no tolerance for other world religions or any deviation to the old traditional ways of the Islamic people. They believe in the use of violent force to make their point.

The organization’s proclaimed leader, Abu Bakr al-Baghdadi went public on June 29, 2014, declaring himself to be the caliph of the Islamic State, which he said was a worldwide caliphate.

Names like that may have little meaning to people in the Western World but here is the significance of what al-Baghdadi said: A caliphate in the Arabic world is a form of Islamic government. The caliph is the political and religious leader and thus recognized as a successor to the prophet Muhammad and leader of the entire Muslim community.

The scary part of the statement was that al-Baghdadi declared himself the caliph of a caliphate that is “worldwide.” Thus the intentions of the Islamic State appear clear. The organization intends to eventually dominate the entire world. He was thus declaring a plan to form a one-world government with himself or his successor in control.

It is interesting to note that other Islamic people outside of the Salafi belief system take offense to al-Baghdadi's claims. Some leaders strongly object to his declaring himself the world leader of the Islamic people and even question whether ISIL represents the Islamic faith at all.

Strangely, however, a poll recently taken by the Middle Eastern news outlet Al-Jazeera found that over 80 percent of the people of the Sunni Islamic faith, support the ISIL movement.

ISIL groups have been gaining territory in war-torn Middle Eastern nations and new representative groups have been appearing like cancerous cells at an alarming rate all over the world. Thus we must ask if ISIL is a militant organization with real teeth? The U.S. military must sense a danger because it has been assisting anti-ISIL forces with weapons and aerial strikes.

Because of its public be-headings and mass killings of people of other religious belief systems Amnesty International reports ISIL guilty of ethnic cleansing on a "historic scale." The group has been declared a terrorist organization by the United States and 13 other nations, many of  them in the Middle East. At this time over 60 countries are waging war against ISIL either directly or by supporting forces that are fighting the rebel militants.

How did such a radical organization get its start?

The group originated under the name Jama'at al-Tawhid wal-Jihad in 1999. The U.S. invasion of Iraq in 2003 helped spark life into this small militant group. Jama'at began operating with a pledged allegiance to al-Qaeda so was known as the AQI. It operated as an Iraqi insurgency during the fighting and joined Sunni insurgent groups to carry out terrorist attacks. By late 2006 the Islamic State of Iraq (ISI) was formed.

When the Syrian Civil War began in 2011, ISI sent delegates into that country to establish a wing known as a al-Nusra Front. Then in 2013, as the Syrian war continued to rage, al-Baghdadi announced the merger of ISI with al-Nusra Front and said the new name was now the Islamic State of Iraq and the Levant (ISIL).

Here is where things began to get really confusing. The leaders of both ISI and al-Nusra Front rejected the merger and in February 2014, al-Qaeda cut its ties with ISIL because of "notorious intransigence." In other words, the Salafi jihadists refused to compromise on the rules so even al-Qaeda refused to remain in the sandbox.

In spite of these setbacks, ISIL appears to have grown stronger and building a larger and larger military force. The group has established a strong military presence in Iraq and Syria, has a presence in Afghanistan, Yemen and Lybia, is threatening to send forces into the European Union.

Most recently ISIS claimed responsibility for major bombings in Paris and Beirut and the downing of a Russian airliner in Egypt. The attacks suggest that ISIS forces are expanding the group's war against interests beyond the Middle East and will be reaching into American and European cities.

Yes the ISIL group is a growing military force to be reckoned with. It appears to be the most radical and dangerous of them all.