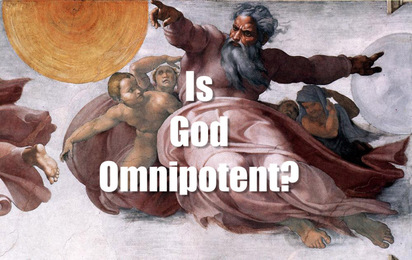 Can God Really Be Omnipotent?

Most humans agree that something created us. Therefore, we generally conclude there must be a "Creator," or an entity most of us refer to as God. And most believers agree that this God must be omnipotent. The word omnipotent means: to have unlimited authority or power.

There is a paradox built into the omnipotence of God, however. It states that "if a being can perform any action then it should be able to create an action that it cannot perform. An example is found in the stone paradox. This suggests that if God can create a stone that He cannot lift, then He cannot be omnipotent. If he cannot create such a stone, then it also proves He is not omnipotent.

This kind of thinking dates back to medieval times when philosophers like Averroes, Thomas Aquinas and others exercised their minds with a variety of worldly paradoxical issues. Among the more interesting questions was whether God is capable of denying Himself.

This issue of course assumes that God is an external entity hovering over all of His creation and maintaining the power to change or alter His creation to answer the whims of human philosophic challenges. That may not be a proper definition of God at all. But just for the sake of arguing His omnipotence, let us proceed with solving this ancient paradox.

Christian apologist C. S. Lewis argued that questions like creating a rock too heavy for God to lift is comparable to asking Him to make a square circle. It is "not logically coherent to think that omnipotence includes the power to do the logically impossible."

Christian philosopher Norman Geisler suggests that omnipotence does not mean that God can do anything. Instead, he argues that God can do "anything that’s possible according to his nature." In other words, supporting Lewis, Geisler says God "cannot perform logical absurdities." For example, God cannot make a being greater that Himself because he is, by definition, the greatest possible being.

And finally, just by its nature, any object, no matter how large, cannot be immovable. Thus the very suggestion that God could create such a stone brings up another peculiar paradox; that of slamming an unstoppable force into an immovable object. This violates a basic law of non-contradiction.
​
So is God really omnipotent? The answer depends on just how we perceive God. If He is all things both great and small, and we exist as a tiny fraction of the whole of the living entity we think of as a God, the question is silly. He can be either omnipotent or not. It may be our choice.