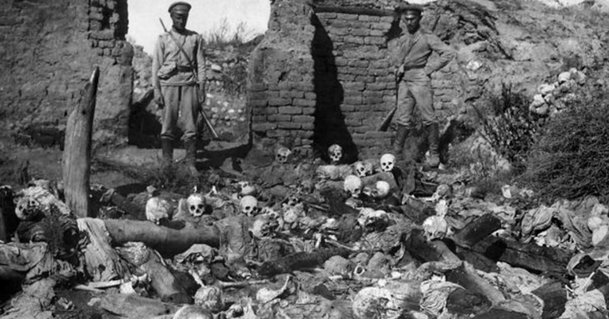 A sobering report by James A. Lucas that appeared in Popular Resistance in 2015 notes that between the end of World War II and the date of the Lucas writing, an estimated total of over 20 million people in nations all over the world have died under the guns and bombs of the U.S. Industrial Military Complex.

With continued military action in the Middle East, Africa and other parts of the world, the death count has been rising steadily ever since the Lucas report. Both the Obama and Trump Administrations have carried out drone strikes against ISIS and al Qaeda rebels in Syria, Iraq, Pakistan, Yemen and parts of Africa that have left thousands of civilians dead in their wake.

The British monitoring group Airwars recently reported an alleged civilian casualty count in Syria and Iraq at 1,472 in just one month. Since taking office in January Mr.Trump has been ordering an average of one strike daily during the first 75 days of his term. He has access to the most powerful military force now in the world and appears to be willing to utilize it as he chooses without seeking advice or approval from his military advisers or Congress.

In his report Lucas notes that U.S. military forces were directly responsible for nearly 15 million deaths during the Korean and Vietnam wars and the two Iraq Wars. The count during the Korean War also includes deaths of Chinese. The Vietnam War count includes killings in neighboring Cambodia and Laos, where fighting sometimes spread.

These were major conflicts, although Congress never acted to declare them actual wars and neither the Vietnam nor Korean conflicts involved a threat against the homeland. Officially they were recorded as “police actions.”

In addition to these well-known conflicts, the United States also has sent military forces into “proxy wars” that brought about between nine and 14 million deaths in Afghanistan, Angola, Democratic Republic of the Congo, East Timor, Guatemala, Indonesia, Pakistan and Sudan, the Lucas report states. Few parts of the world have escaped U.S. intervention over the years.

The above statistics relate only to the warfare the United States has been involved in since the end of World War II. The two world wars were so terrible that the death count could only be estimated and included soldiers and civilians on all sides of the wars. World War I left over 38 million people dead. The Second World War wiped out an estimated 60 million, or about three percent of the total population of the world. Of these, it is estimated that 5.5 million Jews were murdered by the Nazi’s.

The American Civil War, perhaps the bloodiest war ever to occur on U.S. soil, left 620,000 young American men dead on the battlegrounds. Many historians believe the American Indian wars that began from the day Europeans began settling the continent, may have surpassed the Civil War counts.

While the blood count from American military involvement is staggering, there have been worse tyrants in world history. China’s Mao Tse-tung was estimated to have killed an estimated 70 million people during his Great Leap Forward that created mass famine and genocide during the 1950’s. And Genghis Khan, the great Mongolian leader, was said to have slaughtered up to 60 million people, about a third of the known world population, while building his empire.

Hitler’s Nazi Army slaughtered an estimated 19.3 million civilians and prisoners of war in addition to an estimated 29 million soldiers during World War II.

And King Leopold II, who ruled over the Congolese between 1885 and 1908, massacred 10 million Africans.

The human race claims to have advanced and learned to be civilized in the last few thousand years. What humans have done, however, is create more powerful weapons of war and then used them on each other. We have yet to see a time when mankind chooses to lay down those arms and learn to live in peace with one another.