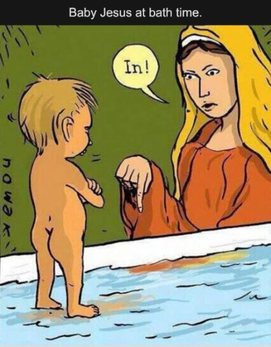 While the Old Testament makes no bones about depicting Jehovah God as an all-powerful force to be feared, the New Testament describes the Son, Jesus, as a kind person preaching love and compassion.

At least that is the stories the priests and high church officials chose to include in the New Testament when they canonized the scriptures about 600 years after Jesus allegedly lived. Many of the New Testament books were already in existence within the first 300 years.

That gave the church scholars involved in collecting and editing the New Testament in its final form a lot of time to select, and edit the text that would be allowed in what became our modern Bible.

And you can bet a lot of stuff was carefully snipped from the original text because it didn’t fit the "correct" theological viewpoint of the early Roman Catholic Church.

For example, there is almost nothing stated in the Gospels or letters about the childhood of Jesus. All we know is that he was a carpenter’s son and it is assumed that he grew up learning that trade from his father.

We also know about a time he slipped away, got among the elders in the local temple, and astounded them by what he had to say. But Jesus didn’t really come out of hiding until his ministry began. And that was when he was in his early thirty’s.

If the Gospel of Thomas . . . one of the books tossed aside during the choosing . . .is to be believed, Jesus was an extraordinary peeler as all children are. The only difference is that he had supernatural powers and hadn’t learned how to control them.

In the third chapter of Thomas is found a story of five-year-old Jesus playing with other children beside a small brook, forming pools of water and making clay. Jesus formed some sparrows out of the clay then decided to give them life. The other children were astounded when the clay figures suddenly came to life and flew off before their eyes.

Later that same afternoon, as the children continued to play at the brook, one of the other boys found a stick and began splashing the water, getting Jesus and the others wet. This angered the young Jesus. Thomas quotes Jesus:

""O evil, ungodly and foolish one, what hurt did the pools and the waters do thee? Behold, now also thou shalt be withered like a tree, and shall not bear leaves, neither root, nor fruit.' And straightway that lad withered up wholly."

If Thomas is to be believed, Jesus also "wasted" another child for accidentally bumping into him on the street. "Jesus was provoked and said unto him, ‘Thou shalt not finish thy course.’ And immediately he fell down and died."

With that kind of unbridled power at his fingertips, we must think that Jesus lived a quiet and lonely childhood. The other children in the neighborhood probably avoided him like the plague.

There was a section of the book of Matthew that seems so incredible we can understand why there was a decision to cut it from the text.

Remember that after King Herod received word that a child was born in Bethlehem who was being called "king of the Jews." Just to play it safe and protect his kingdom, Herod ordered all babies two years old and under to be killed. When they received the news Joseph and Mary fled the city and hid Jesus in a cave.

What was excluded from the story in Matthew was the part about what the family met up with inside that cave. It seems that they walked into a nest of scaly, fire-breathing dragons.

The missing text reads: "And, lo, suddenly there came forth from the cave many dragons; and when the children saw them, they cried out in great terror. Then Jesus went down from the bosom of His mother, and stood on his feet before the dragons; and they adored Jesus, and thereafter retired."

We suspect that Jesus could have been no older than two at the time because the family was fleeing from Herod’s troops. Most two-year-old's are toddling by that age, and maybe learning to say a few cute words. But Jesus jumped from his mother's arms, stood on his feet and tamed a pack of dragons.
​
That would be a pretty cool story to have found in the Bible, if we believed in dragons. And if we really believed Jesus was who they say he was.