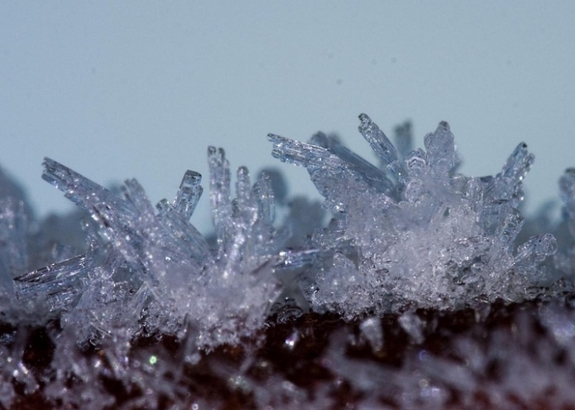 There has always been a fascination that crystal, when placed in a certain environment and observed over a length of time, can change its appearance.

A clear slab of crystal taken from the earth can change to dark shades, sometimes blending in with its environment, and over a length of months or years, if carefully measured, can be found to have grown larger and altered its shape.

For this reason the crystal is highly respected in occult circles and considered a magical link to the Mother Earth. A Navajo medicine man we once knew claimed that he could see images of historical events by staring into a large crystal that my wife once possessed.

Because of the strange behavior of crystal, we question the scientific way of separating living from non-living matter. Science claims that living organisms grow, move and reproduce. Non-living objects like rocks do not. But if a crystal, which appears to qualify as a type of rock, is proven to grow and alter its color and shape, even if it takes months and years to do so, is it not also a living thing? Since crystal breaks into smaller parts from larger pieces, is this not a form of reproduction?

Until relatively recently, most scientists would argue with me that crystals are lifeless objects with a peculiar behavior. But a new field of science called emergent properties is now discovering something amazing about our world and our universe. It seems that there is constant communication occurring among all cells, even those within the rocks of the Earth. And this is suggesting that there is a threshold of intelligence and self-awareness that exists in all things, even the rocks.

In their quest to understand how anything as complex as intelligence and consciousness can evolve from inorganic particles after creation, and how so many things both large and small maintain structure and order, science has either had to take the road too "intelligent design," or consider something that once belonged among the realm of the unthinkable. And it was unthinkable because of religious dogma that clouded their minds.

As the veil of darkness tears and humans begin to open that third eye of the subconscious mind, however, a few members of the scientific community are becoming aware of something never before considered; atoms, molecules, cells and particles throughout the universe do their own "thinking" without outside help. And they communicate, process information, and form new unions, acquiring capacities that are sometimes unpredictable and greater than the sum of their parts.

Evolution, instead of being driven by competition among individual organisms, appears to be propelled forward into more complicated organisms by symbiosis and cooperation among cells, this group of scientists are now saying. It has been proven, for example, that bacteria communicates and can quickly evolve to survive the threat of man-made antibiotics designed to destroy it. And the carbon atoms within a crystal are now thought of as "talking" to each other, exchanging information on how to hold hands and create the form it takes.

This is a concept that is shattering long-standing scientific beliefs. And the discovery is throwing us right into the secret beliefs of the occultists that have enjoyed the poetic beauty of Aleister Crowley’s Liber al vel Legis, that identifies Nuit, the massive universe, and Hadit, the energy within this universe, as a living force.

We believe the Universe is alive and that all of the suns, planets and galaxies are not only sentient, but part of a vast communication system that includes all parts, right down to the atomic level. We are humans living on the surface of our Mother Earth, and struggling to collectively exist as part of this communication system and do it as the evolved and spiritual beings we were designed to be.

Science is only now beginning to catch up with what many aboriginal tribes and the author of Liber al vel Legis knew centuries ago.